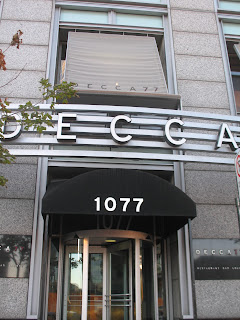 I'll never get used to getting invited to great restaurants... where I can eat great food that most people will never get to try.... for FREE.

My friend L and I were very excited to try Decca 77 (it's at 1077 Drummond... get it?!). It had a bad rep for a while but now that there's the new chef, Jean-Sébastien Giguère, who worked for 8 years by Normand Laprise's side at Toqué!, everything seems to be falling back into place. Looking at the menu before hand made my mouth water and I started drooling onto the floor. Hahaha. Kidding. No I'm not.
We got there and the first thing that hits you is how everything is so big. Two big leather chairs at both sides of the entrance, very high ceilings and huge light fixtures. You kind of feel like you are entering somewhat of a contemporary palace. There was classical music playing and suddenly they put some Black Keys on. I found it fine but L thought it was weird that they switched styles. Oh whhhell!
This restaurant is very well located corner Drummond/René-Lévesque right beside the Bell Center. You're going to watch a game? Why not eat at Decca 77 first? You're going to see a show? Disney on ice? Ok maybe not the last one.

Alright, so we get in and we are welcomed by a hostess that looks like she dsont wanna be there. Sucks for her. She kind of said hi and then walked away so we figured we should follow her. We got a table by the wall which would not have been our first choice, and since the place was almost empty, I thought she could have given us a nicer table, perhaps by the window. I forgive her :p

So we sat and we got water which, as you know, is very important to me :) Our waiter came to explain how the evening would be (since it's free) and suggested that we chose from the menu and instructed us that we would get a 'Cocktail de bienvenue' and a glass of wine each. The rest would be up to us. I surely did not want or need more alcohol since, well, I was a tad hungover :/ 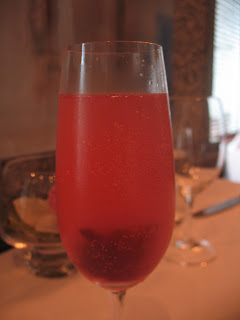 The Maître d' arrived at our table shortly after to give us a hibiscus, grapefruit and bubbly cocktail. First of all, she was explaining this but both L and I only heard half because of her, hum, tight dress shall I say. Haha. Seriously, for the rest of the evening, we'd here her walking and we would just stop talking. I know this makes us sound chauvanistic but hey, when can you do?! Back to the cocktail!

Holy bejesus, that drink was A-MA-ZING (or amazeballs like my brother would say). It reminded me of something I really liked during my childhood, I just don't remember what, grrrr. It was obviously very floral but also very grapefruit-y and bubbly. SO nice! As soon as you'd put your nose in the glass, it was filled with an amazing smell! Really wonderful! Oh and to give it that je-ne-sais-quoi, there was an actual hibiscus flower at the bottom of the glass :)


OK, get ready for the food! First, I ordered the calf's sweetbread with rhubarb confit and black garlic and L had the lobster, tarragon mayonnaise and grapefruit salad.

Let me start off by saying that I had never eaten sweetbreads before and really did not intend on trying it, ever. But I saw it on the menu and I told myself that if I should ever try it, I should try it at this restaurant. And I did. And damn was it ever good. I told L that it tasted like chicken and when she tasted it (as scared as I was...), she said it tasted better than chicken. There were crispy green beans, balsamic caramel, which was thick and yummy, some caramelized peanuts (described by the waiter as 'des peanuts' instead of 'des arachides'... so we found his ghetto side :P) which added a crunchy element to the dish and some rhubarb confit. I have to say that with all the work they did on the rhubarb, it was still quite bitter. There were also a couple strawberries in there that, I felt, didn't add so much to the dish. I guess it did add some colour.
The lobster salad was greatness. The lobster, for once, was cooked just right (I'm sick of eating chewy, squishy lobster!) and the grapefruit's acid was there to balance the whole dish. The also put a little homemade cracker on top to add a textural side. It was a very pretty dish and had a lot of flavours, which was appreciated.

Let's get down to the main course now! I had seen the rack of lamb on another blog and had decided right then and there that I wanted it in my mouth. So I had that dish (with green pea puree, blueberries, tiny grapes, onion confit, green beans and long ass yellow beans). L had the beef filet with clams, pomme boulangère, and bordelaise red wine sauce. For the main, I had chosen white wine (I know I should have taken red but i'm partial to white)--Suave Classico, and L had red--Cave Spring. Mine was very mild and didn't have any strong flavours which was good because my plate had many.

The lamb was perfectly cooked. PERFECTLY. Did I mention it was perfect? Well it was :p It pretty much melted in my mouth. I swear. The fruits were a perfect match and brought just a little acidity to the dish. There were mushrooms also. They were squishy. And then I verified the info and I knew it, they were shiitake. Look, I know this chef has quite the experience but unless you're REALLY sure you know you can cook it, don't put shiitake on a plate. But hey, I'll overlook this because the green and yellow beans were freaking amazing and the sauce was out of this world (and I don't use that expression lightly)!!!

This plate was also visually pleasing (...if you could make love to food...). The clams were great, just briny enough. Very well cooked. The meat melted in your mouth. It was quite rare though. And even if I have learned to love rare beef, L has not, yet. She asked for medium but she got this. She loved it but the problem here was that she asked for medium. Anyhoot. The potatoes were great and the peas were a nice touch. There were also mushrooms here but King Eryngii and they were nice and well cooked and YUM! Would have loved to have THOSE on my plate!

On to desert! L had a soufflé (note: if you have this, it's a 15 minute wait). It had good flavours but I found it had an overly eggy texture.

Wow. OK, don't have this if you don't like overly sweet deserts, duh. Holy bejesus! It was thick chocolaty goodness. I also loved the chocolate beeds; it added some texture to the desert.

Let's talk service now! But first, let me mention that the restaurant was empty. Ok, no...there were maybe 6 or 7 people. It was very personalized: the waiter kept on checking if everything was fine and our water glasses were never empty.

Great place to try at least once! I loved my experience and I will go back [when I'm richer]!

ps: I don't know why but the waiter felt like he should tell us how much our whole meal was worth: 232$. I think this is a good place to insert that L thought that for the price, the portions could have been a tad bigger.