I got an email from a promo girl telling me Burger Week was coming up. Burger week avec fromage to be exact! Yay! I started planning immediately! Me? Burgers? Pretty much a match made in heaven. On top of it, most were priced at a generous 10$ (with fries). Some were 15$ and I think one or two were at 6,99$ but I stuck to the 10$. I planned  to go to four places with Lea. Of course, we were to SHARE the burgers, I mean, come on, we're not pigs :) 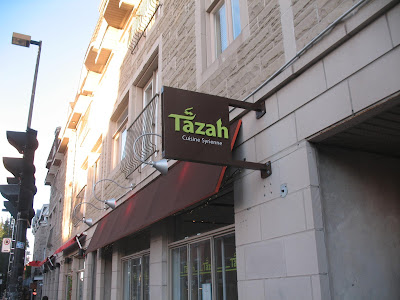 First was Tazah. I missed this place during Poutine week so I wasn't going to miss it during Burger week! We were extremely hungry when we got there but after ordering the burger, it took at least 20 minutes to get to our table. AND we were the only customers. 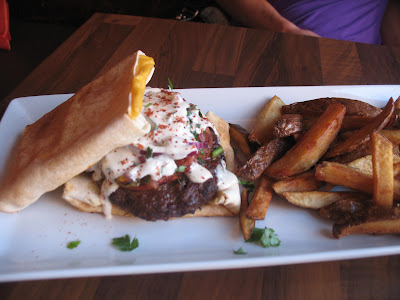 Anyhoot, the burger itself was made of lamb and oh-so-juicy. The flavours were just right. There was parsley and cinnamon in there which made it even better! The onions added a certain je ne sais quoi to the whole thang. The bun was somewhat of a pita and one half was folded over with cheese in there. Actually, it seemed to be Kraft Singles cheese. Weird and nart you'll say but it actually worked! The whole thing was kind of hard to eat though with it falling apart even more each bite we had. And even the whole thing was pretty moist and lovely, at least a quarter of the bread remained dry.

The service was OK. As soon as we said we were sharing a burger, the guy kind of gave us some attitude. It was not as bad though as we got water quickly and the waitress came to see us later on and she was really nice. 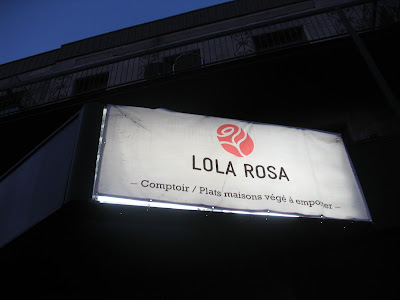 The second place we chose was Lola Rosa. Again, a resto I missed during poutine week. First off, I've been to the Lola Rosa in the McGill ghetto and this place is much bigger and cuter. And it has this huge terrasse! Also, fun fact, your table has drawers. Look in them and you'll find notes from previous clients! So much fun :) 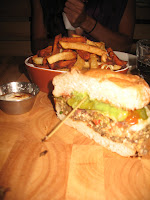 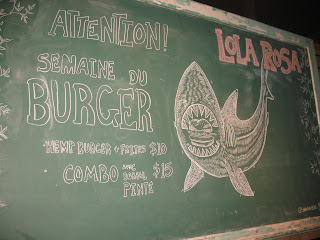 Alright so since Lola Rosa is a veggie place, of course the burger had to be. Apart from the portobello one,  I'm always somewhat reticent to eat a veggie burger. But this one turned out to be wonderful! The mix of flavors was great, with the lentils in there, the BBQ sauce making it taste meaty, the pickle adding a crunch, the tomato adding freshness and the soft guacamole. Yum, yum, YUM! The cheddar added just a touch of saltiness and the tofu... well... didn't taste like tofu :p I'm not that big of a tofu fan. And I need to mention the sweet potato fries. They were DE-licious with somewhat of a lemony mayo.

Service was great. Everyone was welcoming, smily and nice. We got water quickly and the waitress came to ask us how our meal was. That's all I ask :p 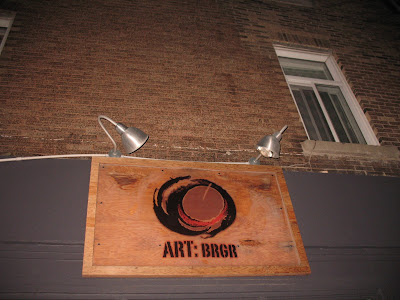 Our third and final spot (no, sadly we did not make it to Les Enfants Terribles because of the lack of room in our stomach) was Art:BRGR. I always pass by this place and had been meaning to try it so this was my chance! This place was FULL and we were lucky to get a table! It was quite happenin', especially for a Wednesday night! 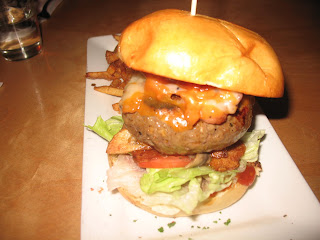 We waited for what seemed like an eternity for our burger. But we finally got... a HUGE burger. We didn't even know how cutting it in half would keep it all together. It was messy. The meatball was stuffed with penne mac n' cheese was a tad too much for a third burger. Although the meat was nicely cooked to my liking, the excess of pasta in there was 'trop cochon', even for me. There was a fried chip at the bottom which wasn't crispy anymore because of the moistness of it all and there was a tad too much cheese. It seemed very American.

The service was meh. The little girl that brought us water and everything was very chipper but our waitress seemed annoyed and had quite the attitude. Right before leaving, we had what seemed like the manager talking to the girls behind us and being all nice and friendly because he knew they had a blog. AH, I should've said something :p But I rather not say anything, because I get the true experience, you know?

It looks like it is worth the effort while in Montreal....good presentation.