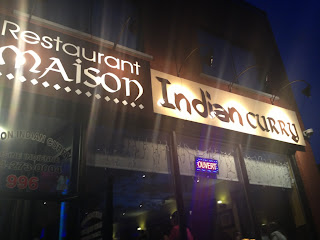 Isa and I wanted to try a new indian resto after getting our eyebrows did on Jean-Talon. We always go to Bombay Mahal so it was time. Oh, it was time. So we decided on Maison Indian Curry, just a tad east of Bombay Mahal. 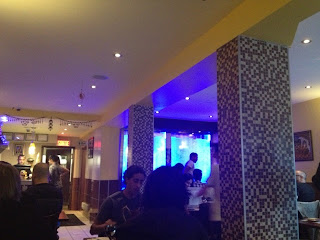 It's quite a big restaurant but it was pretty much already full at 7PM and got even more full after that with a big line up even going passed the front doors. They have huge tables and they don't even bother separating them so you end up eating beside other people which, I guess is an experience on its own. The place feels a tad retro with a multicoloured waterfall thang on the wall. Man, I should have smoked a good one before! Ha...haha...just kidding.

So, we were dying to compare this place to Bombay Mahal. Therefore, we ordered what we would normally order at the other resto: 1 vegetarian thali and one non-veg thali please! But since we were starving, we also ordered two samosas to start off with. Yum! They were soft, spicy and had two sauces to go along. One was prune-y and one was minty. they were excellent. AND huge! 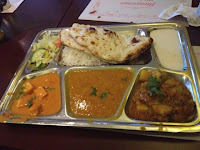 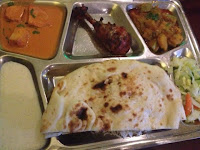 The veg thali had cheese cubes in butter sauce. It was excellent and tender. Seriously and surprisingly, I think it was my fave out of the two plates. The veggies were spicy but not TOO spicy for Isa :p The nan breads were really good and soft. On the non-veg side, the chicken tandoori was really moist and tasty with just the right amount of spices. The butter chicken was, I thought, more tender than the one at Bombay Mahal but according to Isa, the sauce didn't taste like butter as much and wasn't thick enough. Then, on both thalis, there was this tapioca thang. I think we missed the point of that and pretty much left it all in the plate.

As for the service, well, they were really, REALLY busy... all running around! Good thing was that they gave us a pitcher of water from the get go so at least we did not have to bug them for that! Apart from that, they didn't really come and check if we liked our meal and were too busy running around.

A nice cheap dinner (cost me, with taxes and tip, about 13$), but don't bring a date there! The guy beside us had brought his and it was so loud, they had to repeat every sentence!

love ur reviews, but here you miss the boat: for us who are used o the nuances f Indian cuisine, there is a lifetime difference in taste between bombay mahal and indian curry house