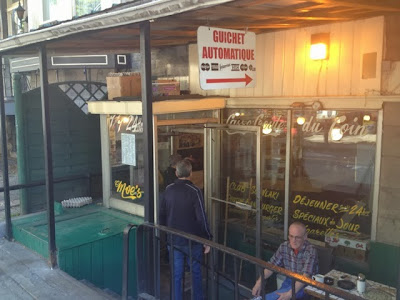 Isa and I wanted to find a breakfast spot to eat at before going to an early movie at the Forum. Well, Moe's was an easy (and cheap) choice! This place is located about 3 steps away from the cinema and 10 steps away from Concordia (oh and 20 steps away from McGill).... I MAY be exaggerating :) 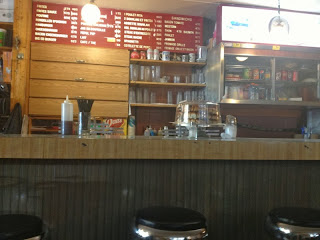 I'd safe to say this place is more like a good dive. At first glance, it seems run down and dirty. Hopefully, it's not all that dirty.  This restaurant is in a basement, with many hockey related posters on the wall, broken jukeboxes and around 30 seats. But the important part is that it's opened 24/7, since, like, forever.

The waitress came to give us some water and the menus in between chats with regulars sitting at the bar area. We both had the same thing, except I, as per usual, had to make my breakfast bigger. So I added sausages and an egg :p 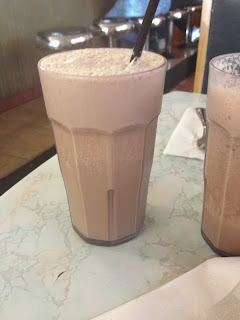 I don't order milkshakes often but I can tell you this one was good! It was thick chocolaty goodness. It was ice cream in a glass!!! Isa thought it was fine but that the ice cream stayed at the bottom and there was nothing left but foam and bubbles on top. 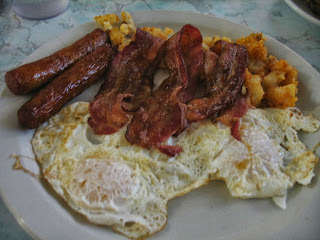 I had 2 eggs, bacon, sausages and potatoes. No fuss, no veggies, no fruits. The sausages were regular breakfast sausages: they were very nice and moist (mooooiiiissst, I HATE that word). The eggs could have been seasoned but other than that, they were fine. The bacon was tasty and crispy, just the way one should like their bacon. The potatoes were a tad too mushy for me. It was nothing special but it was good.

Service was very fast. The food came fast, the milshakes came fast. It was appreciated. It even came TOO fast because Isa was out trying to find an ATM while the food arrived: they only take cash. And yes, we then stupidly made the obvious discovery that there was a machine right behind us.

Food: 6,5
Service: 7 Efficient but a smile would have been nice!

Great place to go to for a cheap breakfast or a late late night after-you're-done-studying eat!