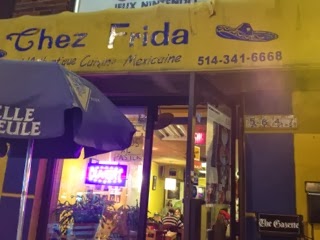 Things you notice when you enter Chez Frida: first, a broken fridge with plastic wrap instead of a door AND second, instead of two little mexican women welcoming you, it's two asian women! Weird? Maybe a tad! But hey, if I can cook asian, they can cook mexican! Anyhoot, this place is tiny, with about 12 usable seats (apparently, according to the article on the wall, it can seat up to 30!). Fun fact: while you wait [a good 30 minutes] for your order, they give you some corn chips and salsa verde! 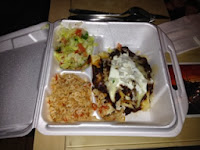 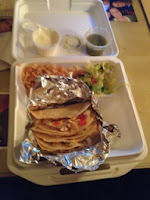 We ordered enchiladas de mole and chicken quesadillas. It was actually (and don't laugh at me!) my first time eating mole. I said DON'T laugh! :) You know what? Chocolate and onions: good! Chocolate and coriander: goo-hood! Would have loved it if it would have been spicier like it was
mentioned on the menu. Rice and salad came with both plates: the rice was surprisingly tasty and
mixed with salsa verde, it was even tastier. The salad, although very simple, had coriander in it which made it way better (note: I loves me some coriander). The bread in both the enchiladas and quesadillas was dry and the chicken in the quesadillas was dry as well. Come to think of it, the quesadillas did not taste like much: you had to dip them in either the sour cream or the salsa verde to get anything out of them.

And now, the score:

Food: 6 :( I was really hoping to give a better score here but the bread was dry, the quesadillas did not taste much and the mole could have been spicier.

An OK mexican eatery: it's cheap and will only set you back about 13$ including taxes and tip!