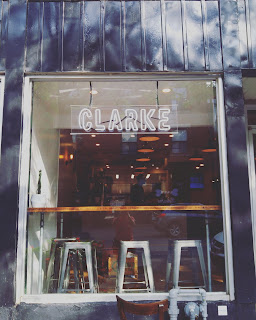 Café Clarke is a small and cute little café on Centre street in Pointe St-Charles. Let me make this clear, Pointe St-Charles has, like, one good restaurant worth the detour and that is Machiavelli. There are a couple other good spots like Miel and Bloom, but I wouldn't necessarily come from, let's say, the Plateau to eat there.

The now defunct Boulangerie Clarke in the Mile-End had a little baby. Frank Servedio, the owner, use to work at the boulangerie, which was owned by his parents. This is a big great family story! Café Clarke is basically a sandwich shop that serves awesome coffee (or so I've heard!). What differentiates them from other sandwich shops is the fact that their sh*t is fresh as can be. Sandwiches are made to order AND they cut their own meat. Hello. What a difference that makes! 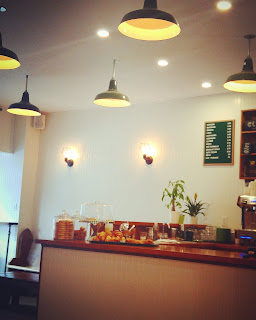 The place feels very homey and warm. Feels like you want to bring all your friends there, you know? I also really loved the color scheme: green, white, and light, classic brown. Yes, 'classic' brown. It's a thing. 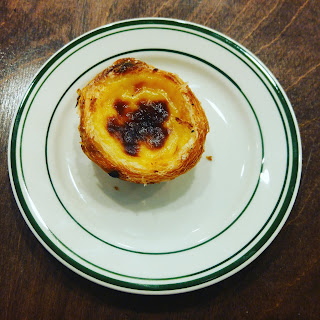 I started with the pasteis de nata, because it was already right there! I was a bit dispointed that it wasn`t A: made in house and B: not supes fresh. Obviously, it was a day old. I just went to Portugal, see. I KNOW what a day old pasteis de Nata tastes like. I am used to the yummy, crunchy, soft, pastry. Not the dry one. Don't get me wrong, it was still OK, but it just wasn't worth it. I got so excited! And then I got so annoyed. At them. For selling me a day old nata :/ 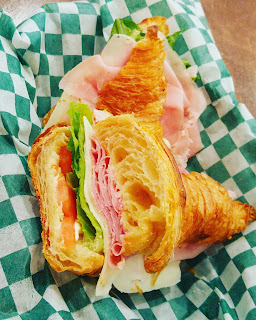 La sandwich in a croissant! I loves me a good croissant sandwich! A good looking sandwich, without any fla fla. Dunno if that's a thang in English, but I'm dsoin it. It just means that it is simple. Thinly cut ham, almost like paper: THAT's the dream. The croissant was buttery and right about melted in my mouth. The only negative, if you can call it that, is that the tomato was a tad too juicy.

The only thing I'll say about the service (which was at the counter.. so I won't rate it), was that it took the dude a while to even say hello to me. Just say hello, and tell me I'll have to wait a couple minutes. GEEZ. 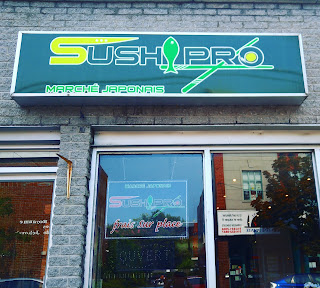 Everyone knows I'm a sucker for some good sushi. I'd even say that I'm a sucker for OK sushi. But do not fret, I know how to recognize it. I mean, as some of you may know, I rolled sushi for a good five years. For some people, that's, like, a quarter of their life. WHAT! I had a sushi craving the other day, so I hauled my ass supes close to my house to Sushi Pro, on Centre. Basically 200 meters from my place. You know, a long walk :o

I called to order because I was being super lazy: what's better than to order in advance so that everything is already packed and ready to go when you get there? I was ordering an avocado roll, a spicy salmon roll, a salmon nigiri and ---. That woman crushes my sushi dreams when she said 'no avocado roll, we are out'. How? How is that possible? Do NOT tell me that there aren't any more avos! So yes, basically their supplier had brought them unripe avocados. And they were paying the price. I remember, when I worked at Sushi Taxi, and I was ordering our supplies... the avocados were a very tricky game. How many do I want ripe, how many do I want almost ripe, and how many do I want green. They were supposed to have all three but it wasn't rare that they, themselves, didn't have any ripe ones. I had to do all the grocery stores in the area to find avocados. THAT was a pain in the ass. 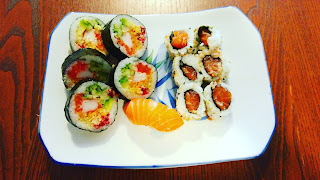 The nigiri. Since when are nigiris sold separately (by Maden!)? By separately, I mean by unit. Who gets ONE nigiri? Well, except me, hahaha! Didn't they all used to come in a pair? Anyhoot. The salmon was ubes fresh, and the nig was well... nigged :p You could see she knew what she was doing.

The spicy salmon roll. I loves me a good spicy salmon roll! As with the nigiri, the salmon in this was melt-in-your-mouth fresh. And it had just the right amount of spice. I likes me some spice, but sometimes, it's like, dude, don't ruin it with too much.

The salmon kamikaze. Salmon, tempura, avocado, cucumber, goberge (apparently "pollock" in English?!?!), tobiko, some house mayo. House mayo= probs just mayo + sriracha or sambal. Maybe a bit o' yogurt. There wasn't nearly enough salmon in there. If you're not gonna put salmon in it, don't call it a SALMON kamikaze. Geesh! The flavours were all awesome together, and it was well rolled, i.e. it wasn't falling apart like some sushi I buy at the bio grocery store in Galéries du Parc.

I'll go back next time I'm home and I have a craving, but I would prefer other places! 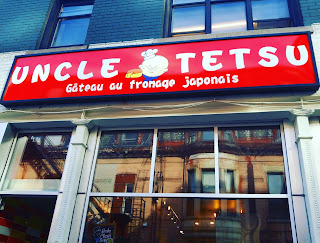 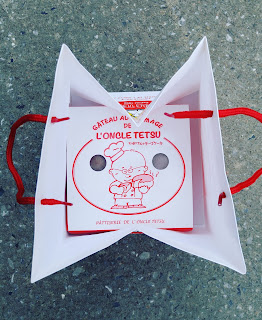 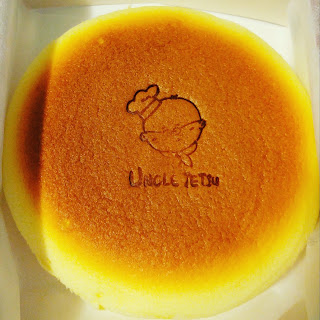 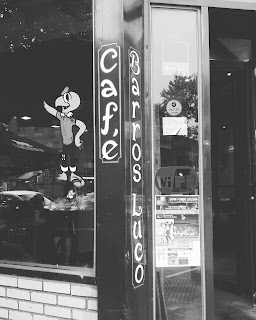 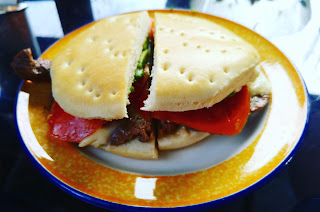 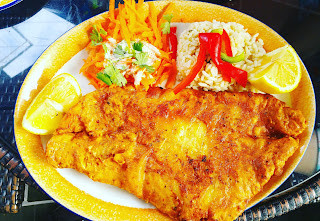 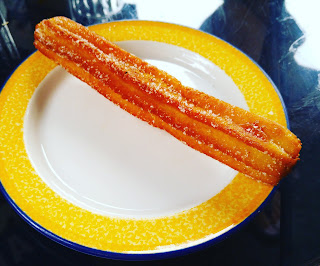