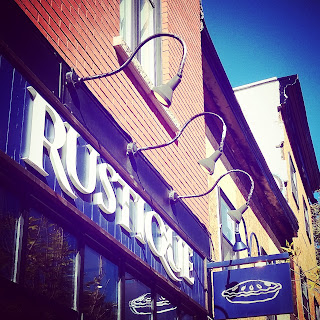 Rustique is located in St-Henri, about a 6.545 minute bike ride from my place. Now, tell me why I didn't try this bakery before? Mmmya, I don't know either. 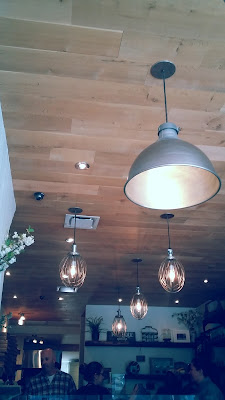 This place is so darn tootin' cute: wooden panels, very small with about 10 seats, upbeat music, staff friendly like there's no tomorrow. Oh and please notice the light fixtures: a bowl and a whisk? Come ooooon! Cuteness overload much? This was going to be our dessert after eating at Tejano BBQ just a few blocks down. Basically, we were continuing the 'pigging out' portion of our day. 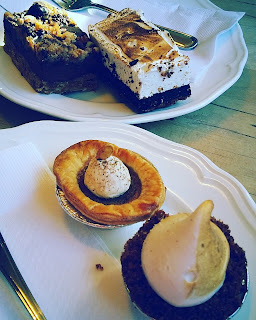 This was to be shared with Lea. No no... not 4 or 3 people. Only 2. Cause we be pigs. Yep! Obviously, we wanted it all. But let's face it, our stomachs were not equipped for a buffet of yummy desert so we went for the feast instead (not sure that really makes sense but I'm rollin' with it).

Bottom right: spicy chocolate itsi bitsi pie with marshmallow top. The crust was fantasticaaaaaal and crunchy and chocolaty and all that goodness. The chocolate was spicy enough to do 'that thing' on my tongue, which I always love when it comes to chocolate (I don't know how many times I've eaten that yummy Lindt chocolate bar with the chili pepper). The marshmallow part of it was, well, sticky! Try cutting THAT in half! It was a tug of war business between Lea and I. She won. I still had some but although it tasted just like it should (not too sweet), it remained way too sticky for me and my brittle teeth.

Bottom left: pumpkin pie. Hello! It was great as a whole with a flaky, buttery crust that was just to die for but it sadly didn't taste much like pumpkin. I like it when my pumpkin stuff tastes like, well, pumpkin. Duh.

Top right: basically, a smore dessert. Ex-cuuuuuse me? Yes, you heard that right. Turned out to be a bit disappointing :/ The marshmallow took up about 8000 units of flavor buds. Wait, that sentence made no sense. Again, I'm rollin' with it. The marshmallow part of it was just too much, basically. Too thick and, again, too sticky (YES, I know it's supposed to be sticky). The chocolate part was awesomeballs but there was just not enough of it! I wanted it in reverse; more chocolate, less guimauve!

Top left: choco-nuts-coconut heaven allmighty in all heavens dessert. Yes, that much. Holy sh*t that was great. It was like dying and going straight to chocolate paradise. Every last bite of it was good, and when we did get to the last one, I believe there was a tear in my eye. OK, not really, but you get the point. The chocolate was dark and thick and stuck to your teeth like it just wanted to stay there forever (and I felt the same way). The nuts added a crunch, obviously, but blended in well with the smooth yumminess of it all, the coconut was present without being overwhelming, and that crust was just asking to be devoured. As you can see, I can get pretty intense when it comes to dessert! Haha!

Service was great: it felt like all of them owned the place. I've rarely heard of 8 people owning the same bakery. They were all smiles, gave us water, were very helpful when we asked what we should have (everything!!!!) and just plain nice.

I'm thinking of going back about 10 biiiiiiilliiiiiioooon triiiiiillion times. Good? 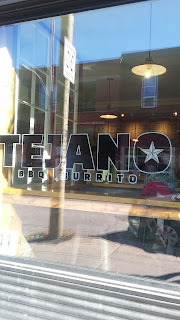 Aight, so there's about 18 new Mexican restaurants in St-Henri. OK, no, that's a lie. I believe there are 3. Still. One of my main goals in life right now is to go to all of them. So last week, I decided I should start with the furthest one (and slowly make my way up!). 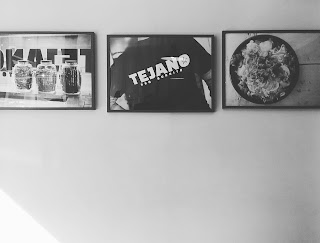 Tejano BBQ Burrito is Black Strap BBQ's baby. Basically, all the meat comes from Black Strap, which, let's say it, is pretty darn tootin' awesome. It is also quite tiny, even smaller than the latter, with about 8 seats on two counters. EIGHT. I think they've exaggerated there. We, as a group, we're taking up more than half the restaurant. 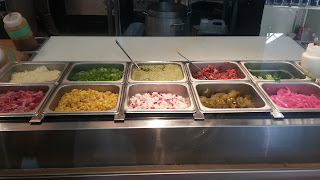 Anyhoot, the premise of this micro restaurant is that you get there, you order and you get the f*ck out! Ha, I kid, I kid. No. There's a counter kinda cafeteria (not to say Subway---cringe) style right in front of you when you enter. Basically, you choose out of a salad, a burrito or a large burrito. Thank my lucky ass stars I had the 'small' burrito. It was larger than my head, man! You choose what you want as a base (black beans, fried beans, Spanish rice), you choose yo meat (smoked chicken, chorizo spiced pulled pork, cumin spiced beef), and then you choose out of 200 veggie type thangs (guacamole is a dollar extra but well worth it, pico de gallo, radishes, marinated onions, hot peppers, green peppers, cheddar, lettuce, corn, etc...) 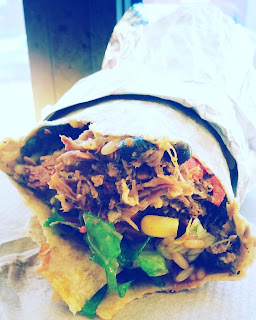 I had the smaller burrito (which, lets face it, was on the larger side of things) with beans and rice as a base, with Pico di gallo, corn, onions, peppers, guacamole and some lime on top (you NEED the lime on top!). All o' this for 10 bucks. Mmmmya, I think it's safe to say it's a good deal. I had the pulled pork oooof course.

Mmmkay, so the pork was unfortunately a tad dry, or a bit more than a tad. The guacamole was well worth the extra dollar: smooth and tasty... yum! The rice was really tasty and well seasoned but the beans were a bit on the harder side of things. Meh. The onions were oh-so-good, but you know me and onions :) The lime obviously did it's job and brought out all the flavors which was wonderful. I could have eaten it without the corn though and in the end that burrito was way too big, really. And totally falling apart. All over. Everywhere. After this tragedy happened, I was just eating the ingredients off of the bread.

Two of my friends that came along had different things off of the menu: Lea had the bowl and Sabster had the veggie burrito. Lea was REALLY pleased with her chicken (I tasted it; much juicier than my pork) and rest of bowl but Sabster was even less pleased than me about her veggie burrito. She found that there weren't enough veggie options to put in there.

Service was at the counter. Kinda like Subway. Damn it, why do I always have to go back to Subway. Anyway, they were really nice, explained our options, told us what they preferred and asked how hungry we were and suggested either the burrito, the bowl or the huge mother freakin' burrito. All in all, very courteous and knowledgeable.

I think I'll try the other Mexicano restaurants before I go to this one again but it's not totally off my list :)