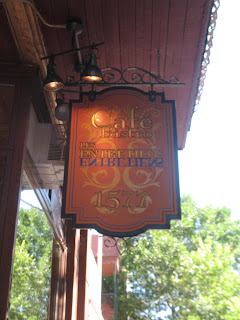 I absolutely wanted to eat on Laurier East one day and so I brought two of my good friends, Jega (wow girl, I totally transformed your name into the coolest one!) and Rach to that area to scope out the resto scene. I had been to Byblos 2 weeks before so I didn't want to go back there. We decided on a cute little bistro on Laurier. 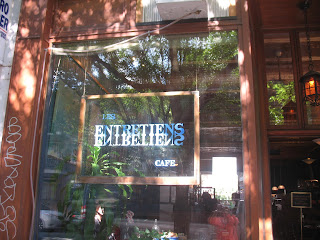 There was no one in there. No one. Which means we got service very quickly. Water was on the table as we were being seated. Nice. We were there with Jega's daughter who is not even 18 months so it was fun to know that they had toys for her (and for me!) and a nice big salt water tank with lots of colourful fish in there! 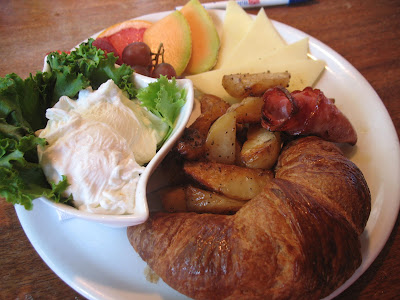 Staying true to my usual, I ordered the biggest breakfast on the menu. I had 2 eggs, some breakfast potatoes, fruits, ham and cheddar with a croissant. Yummy! Actually, you have the choice between baguette, brown bread, bagel or croissant (for 0,50$ extra). The ham was bacon-y, almost crunchy. Very nice! The potatoes were well cooked and not mushy (you know when you get mushy potatoes...). The eggs were unfortunately unseasoned (yes I know I can season them myself but hey) and they were in a bowl. It became kind of narst with the water from the eggs and the running yellow. Let's just say it wasn't the best vessel. The fruits were very fresh and the croissant was soft, buttery goodness! 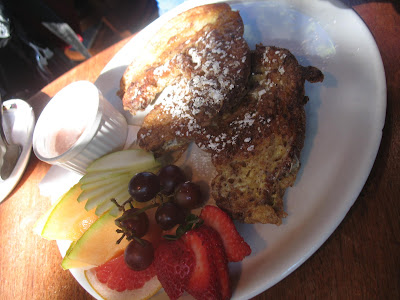 Rach and Jega had the croissant doré with fruits. Again, I thought it was cool they could their croissant pain doré style! They were both very happy with their choice. It was original and delicious, crispy on the outside, moist on the inside. Oh and it was cinnamon-y! Rach even said it was the best french 'toast' she had ever had! Oh and there was this mix of maple sirop and yogourt in the bowl: very enjoyable on the croissant!

The service was great to start with: she was very attentive and we got everything pretty quickly. But then, by the end, meh... it took a while to get the bill and as I mentioned, we had a tiny kid with us so when you gotta go, you gotta go!

A nice discovery! If I do go back though, I'm taking the croissant doré!