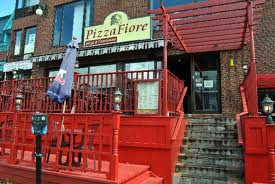 After Isa came back from Barcelona, she was QUITE tired. So, we decided to make it easier on both of us and just go out to a nearby restaurant. She chose Pizzafiore. 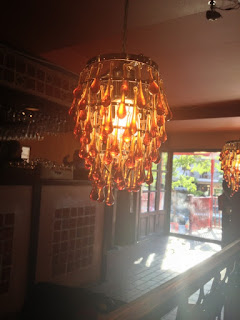 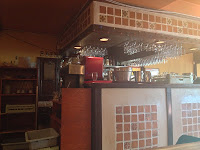 I don't think this restaurant is that old but it looks old when you're inside. And not 'good' old. It looks a bit like how my grandmother would have designed it. Meh. Oh but the good thing is that there are two, yes TWO terraces. It's more of a family restaurant. I would never in a million years go on a date there.  There's about, I'd say 150 seats ISH. Oh, there's also this huge wood burning oven when you come in, which makes you think your pizza will be better than average. Oh can I please also mention that there are Christmas lights up permanently and they are full of dust. Second 'oh': there's a freaking tv in the corner. Why???? I'm sick of restaurants with tvs. I want no more tvs. NO MORE.

The waitress came as soon as we sat down, in the almost empty restaurant and offered us some water and the menu. We knew we were going to share a pizza (it IS named PIZZAfiore after all... you don't go there to eat spaghetti) and we decided to share onion rings as well. It had been a while for me and onion rings. Maybe it should have stayed that way (more on this later). We also decided to have some sangria even though at some point Isa said 'wait, did we already order sangria here and did not like it?'. Well turns out yes. But it had  been a couple years since our last visit. 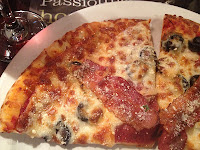 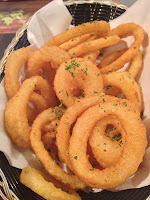 Here's the breakdown. The onion rings were dry and over fried but it was
still a good size portion for the price. But hey, I say make it smaller but better! We had the Parmigiana pizza mainly because, well, who doesn't love bacon on their pizza? It was tomato sauce, pepperoni, bacon, olives, parmesan cheese and mozzarrella. The bacon added saltiness to the pizza
which was nice but the crust was nowhere near perfect. Actually, it was only partially cooke din the middle. Meh. And then the other half was too hard. It was not worth the 17,95$ we payed for it. At least the oil with hot pepper flakes made it a tad better. The sangria was yet another disappointment: it was clearly store bought and lacked flavor.

The service started off really nicely: she welcomed us, brought us water very rapidly, took our order quickly. Then, she started talking to the other waitress and it was like a tiny little party. OK, I'm exagerating but come on!!! If you want to talk to your fellow waitress, go somewhere where the clients won't see you! That shiz is just impolite!! Pffff...Some people!

Not a great experience. I guess you can order some pizza (they deliver) and hope it's better than the one we had but I think next time, if I want pizza, i'll just go buy it across the street!