We got the idea to go to this restaurant after reading the 'Best of MTL' in Cult (# 3 - best caribbean). What a great idea! So we headed to this tiny Guyanian restaurant on Avenue du Parc on a rainy evening a couple weeks back. 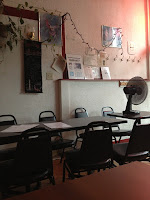 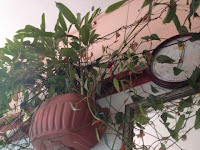 The place itself looks old and a tad ghetto actually. Old chairs, old tables, christmas lights, popcorn walls, posters of Guyana and fake plants were very present :p But you know what, the place itself is never (NEVER!) as important as the food. Apart from if, you know, there are bugs and shtuff. There's room for about 24 people. Anyhoot, we got in and we were the only ones in there. I believe there's 1 chef and 1 helper (the man who also welcomed us).

We got the menu and water very fast. First thing I saw on the menu (and if you know me, you'll say 'duh!') was the rum punch for... wait for it...3,50$! Well hello there! It was freshly made, had a great smooth texture and was actually very refreshing.

As we were looking at the menu, we noticed that many items seemed more of the indian persuasion and we started wondering. We then learned this: 'Guyana's geographical location, its sparsely populated rain-forest regions, and its substantial Amerindian population differentiate it from English-speaking Caribbean countries. Its blend of Indo-Guyanese (East Indian) and Afro-Guyanese (African) cultures gives it similarities to Trinidad and distinguishes it from other parts of the Americas. Guyana shares similar interests with the islands in the West Indies, such as food, festive events, music, sports, etc.' (wikipedia).

Let's get to ze food! We had the shrimp curry (with an add-on of pumpkin{1,50$}--a to do!) and the chicken dahl served in a little soft pocket of goodness. It looked like a wrap. The curry came with a refreshing salad, rice and a very lovely plantain(my new obsession). YUM!!! The only, really, the only thing was that the shrimp were a tad overcooked. But the whole dish tasted so damn good, I'll forget about the overcooked shrimp :p It was on the spicy side of things but hey, that was to be expected! The flavours were all there! And I still added some hot sauce cause, you know, I like it hot :p

The chiken roti was great as well. The chicken was really well cooked and the seasonings were again very present. VERY tasty! Oh and it was dsamn cheap!

The service was great throughout. Maybe because we ended up being 4 in the restaurant...but that never stops a bad waiter! We had great water service and our waiter was very attentive. The food also came quite quickly, considering the staff that was present!

I'd been there about 6 or 7 years ago but this time it was even better. Don't be fooled by the actual restaurant. The food is awesome.