Last Saturday, we were supposed to go out to eat with friends and at the last minute, they canceled :( SO we decided to go out anyway and went to Mc Carold's pub a couple blocks away. I know them as the best freaking burger place around. And they didn't dissapoint!!!

We sat down and got the menus very quickly and subsequently got our food and beverages quickly as well. Just the way I like it :) I took the Ballymore (bacon, swiss cheese, mushrooms--9.95$) and Isa took the Cheesy Jack (poutine with beer and mustard chees

e and some fried onions on top with a Jack ddaniels gravy!--6.75$ for a small one and 9.75$ for a big one--she took the small one but thye gave her the big one!!). My burger was sooo good: moist, crunchy bacon goodness with enough cheese compared to other places where they put a hint of cheese in there. Isa's poutine was good. Even I liked it and I usually don't like poutine, so that one was a winner. The crunchy onions on top were a great touch! I must also mention that they use une huile sans gras trans pour les frites AND that you can make any burger a veggie burger.

We took a litre (24$) of sangria(which turned out to be a tad too much but hell...) and it was pretty good. Not the best ever, and I think we can make a better one but for a bar, pretty good. We ordered it and about 5 minutes later, it was on our table. It's always so satisfying to get your shiz quickly after ordering it! Oh and might I say that it was a BIG litre!

The atmosphere of the place was good: people talking--it was pretty full--and the Beatles playing on the stereo. That was enjoyable!

As I mentioned before, Isa had ordered a small poutine and she got a big one so they just let her have it for the price of the smaller version. More food for us! Hahaha!

I must mention that its not the first time we go there and their interac/credit machine is not working. And you know, when there's a note in the door right in front of you, you barely ever see it so we ate and then gave her cards and she said 'didn't you see the note???'. BAH. So Isa, lovely girlfriend that she is, ran home to transfer herself some money and then got some money out and came back. That was a hassle though and not very cool.

Apart from that, a very good place! If you are looking for a good burger(or poutine) and you've tried of Frites Alors! a couple times and weren't satisfied with their DRY burgers, go to McCarold's, corner of Lacombe and Côte-des-Neiges. 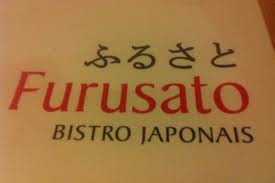 Aujourd'hui, je suis allée manger avec mon père au bistro japonais Furusato (anciennement Osaka). Le resto a un gros roulement donc on est toujours sûre d'avoir de la bouffe fraîche which is good, especially for sushi (when I worked for Sushi Shop, I had to personally throw out most of our stuff on Monday morning when I arrived for my week of work because people during the weekend did not throw anyhting out... and we did NOT have un gros 'roulement').

There's about 40 seats and only one waitress so service is bound to get a bit slow.

We ordered two plates of sushi (my dad with a lot of makis and me, more nigiris). La serveuse nous a ammené du thé, une salade et une soupe miso which I thought was great.

The whole thing cost about 22$ for two. Not too shabby.

It's good sushi and you probably won't get anything that's more fresh because so many people go there but it wasn't great rolling and the atmosphere wasn't great either. If you are looking for a good, decent, lunch sushi place, this is it. 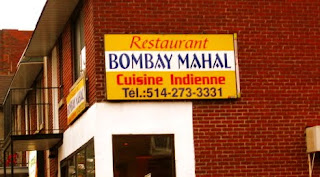 This will be more like a tiny glimpse of a restaurant instead of an actual full-on critique...
Isa and I went to get our eyebrows done on Jean-Talon near Acadie where there are lots and lots of indian restaurants. After the crying and the eyebrow threading, Isa got the marvellous idea of pointing out that we were around the butter chicken mecca of Montreal! 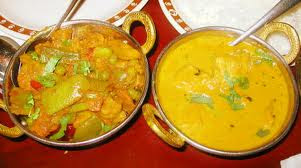 The place itself is really nothing special. It is not that clean, has unstable tables and still has Christmas lights up (although I remember last time we went it wasn't xmas time and they still had them up, so maybe it's a thing). But who cares, they have butter chicken (right on picture).

We crossed the street over to this restaurant which we had been to a couple times with one thing in mind: buuuutter chiiiiicken! We ordered butter chicken and two nan breads (17$). Man, that was DE-LI-CIOUS! Can't get better butter chicken than that in MTL (some have said that it is even better than the one you can get in India) : tender chicken in a butter sauce with some coriander...mmmm. makes me want to eat some right now!

The service was quick and we got our food very quickly as well. The one bad thing about the experience: we found a hair in our food. Sucked but I guess it happens.

Place itself: Rating here would suck BUT I mean, it's a small, bring-your-own-wine restaurant that people know and love so they don't need a nice looking venue to enjoy it