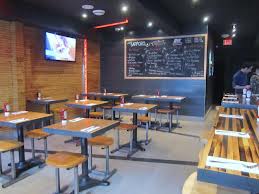 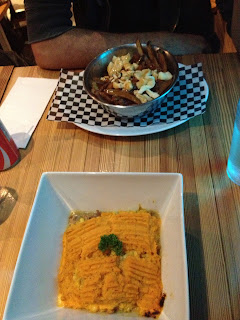 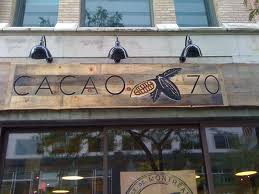 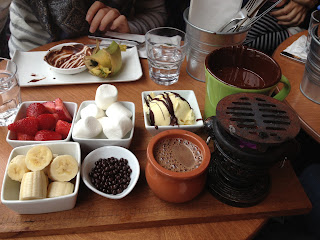 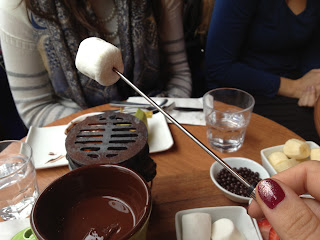 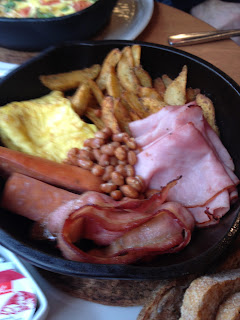 After a loooong day at school last week, I got home to ze wife who said 'we're going out'. I was MORE than happy to oblige! We decided to go to a new restaurant (about 6 months) in Côte-des-Neiges, Les Tontons Flingueurs. In the hot summer days, there was always a bunch of people on the terasse, on Côte-des-Neiges and it seemed quite 'happenin'. Therefore, Tontons Flingueurs it was!!

The atmosphere itself was chill, with a nice vibe with jazz music playing. The actual place seems really big for the seats: there are about 70 seats and there should be more like 100. Hello profit? Mirors adorned the walls and there were a few chalk boards amongst the wooden panneling. Don't get me wrong, usually, I dson't like panneling, but it gave the place somewhat of a charm and kind of a cottage feel. Oh, also, the banquettes were church benches, which I found cool.

We got seated right away and our funky waiter (man, the afro on that guy was spectacular!) brought us paper menus (the menus were getting a makeover apparently). He told us about the specials that day. There were three and all seemed fancy and way more expansive than what was on the actual menu. On the menu, you could have believed that you were in somewhat of a somewhat fancy snack bar.

We ordered a bottle of Pinot grigio for 25$. As the waiter was bringing it to our table, I could see it was Barefoot, the 9,90$ wine at the SAQ. Man it really fizzles my dizzle (yes, it's an expression!) when restaurateurs sell a cheap SAQ wine for 2.5 its price! grrrrr! Nevertheless, it was served well, selon les standards de l'ITHQ, so that made me happy ;p

About 15 minutes later, the waiter comes back and announces to ze wife that there is no more lamb. Hum, il est 6:30 et déjà, tu raye un plat de ta table d'hôte? She said she would take the surlonge instead and guess what? 10 minutes later, he was back telling her that was out too! Il lui a dit qu'ils allaient lui donner de la bavette à la place ('qui coûte plus cher en passant'). Fun. So now they've changed her options TWICE. BEFORE 7. By the way, we weren't even 10 in the restaurant. What the hell?

The food turned out to be just OK, nothing special, too many peppercorns on the meat. On a cold plate :( Grrrrr! The waiter could have asked us how we wanted our meat because it turned out to be a tad overcooked, which just added to all the shiz. Anyway, for 22$, not worth it! En plus, dans notre petite salade, il y avait des betteraves à la cuisson douteuse... elles étaient trop dures. Yet another dissapointment.

To add to all of this, the waiter took Isa's plate when she was done and I wasn't. I really hate it when waiters don't follow the protocole!

And I'm being nice. If you want to try a new place, try another one.