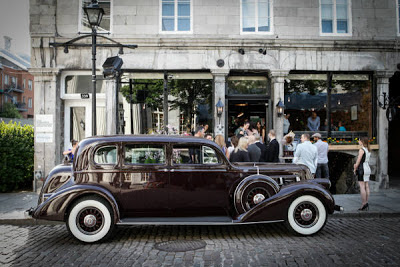 Yay! I got invited to yet another media restaurant opening! Shall I say it or shall you? I rock! Ok, a lot of other people rock too but still :) This time, I brought Isa and we were hoping to get a few bites and a glass of bubbly...but we got so much more!

The new happening place is located right smack in the old port, right in front of Marché Bonsecours on St-Paul. It's very easy to get to from Metro Champs-de-Mars. I always have this preconceived idea that if you say old port, it's too far for me. But it's not. 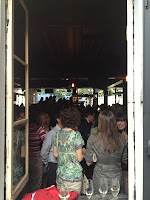 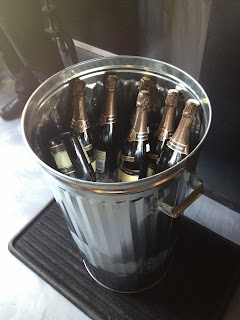 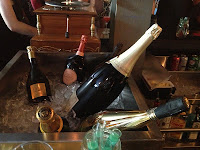 So you get there and there's this old black car, going with the theme of drinking champagne, Marilyn Monroe (you know, how she took a bath in champagne and everything) and the whole bit. It was cool! We got there earlier this time (last media restaurant opening I went to, I got there  almost 2 hours after the beginning of the event and there were no seats and a bunch of people), and so we were able to roam around before it got full. There's this huge bar in the middle and apparently, according to one of the waitresses, when the tables will be in, it will seat around 200 people. The place itself looks great: half old rock and half brick, with one wall made of concrete, it looks both industrial and classy at the same time. It's charming, it really is. One thing you need to know though: there's no terasse. That kind of sucks: who doesn't want to be outdoors, sipping on bubbly and enjoying the nice weather? There is a place out back in the parking lot where people went to smoke but that's not the same. And you obviously can't bring your glass of bubbly/champagne with you (or this bodyguard type man tells you that you must go back in!). 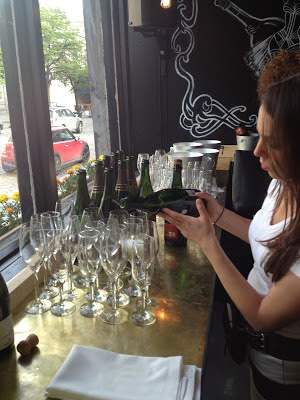 Anyhoot, there were two tables where waitresses were pouring bubbly. At first it was Cava Segura Viudas and then some prosecco (I believe also Segura Viudas). It changed throughout the evening. And let me tell you, there was bubbly. And more. And THEN more! It was gooo-hoood times! And on top of it, there was food! I mean, what more can I ask for? Good drinks and food? Hello! 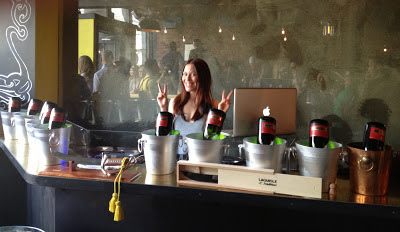 Oh and Abeille Gélinas (Mitsou's sister) was the DJ that evening and it was very enjoyable and happening I gotta say. She was very nice. Especially with all the photo ops she had to be a part of!

They have this really cool concept: champagne cocktails! Oh and if by now you're thinking you will never  be able to afford drinks at La Champagnerie, think again: they have very affordable prices and of course then there's the really expensive stuff! Their wonderful cocktails that will cost you about 12 to 14$. Not too shabby! Alright, let me tell you about these great cocktails! First of all, when we got there and saw the test tubes on the bar, we didn't know what to make of it. But then someone told us to just take one (or two ;p) and put them in our glass. Great, GREAT idea! It adds so much to your drink!!! We had a couple: death in the afternoon which is supposed to have absinthe but we didn't really taste that, champagnolada which is a twist on pina colada, it was special and lovely, bergamot 75 with bergamot puree and classic cocktail. All of these were tasty but I think my fave was the coconut one; reminded me of Cuba! YUM! I have to say that these drinks can be dangerous: adding alcohol to alcohol? AMAZING! We had one glass of champagne at the end of our evening but unfortunately, I don't remember the name of it :/

Let's talk food. AH food, my first love :) They were not cheap on that either which was nice! There was pretty much always someone passing by with something to offer you. I must also mention that the chef is Danny Smile (Danny Francis), chef (or ex-chef?) at Chuck Hughes' Bremner and also from Top Chef Canada (ya, I'm a food network addict)! You can check him out @ http://dannysmiles.com/ 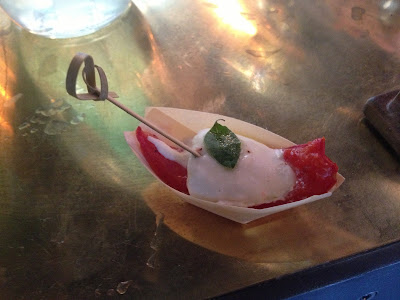 At first we tried an item off menu, it was a grilled tomato with burrata (mmmmcheese) and basil. Very simple yet good. Could have used a tad more seasoning but it was still enjoyable. 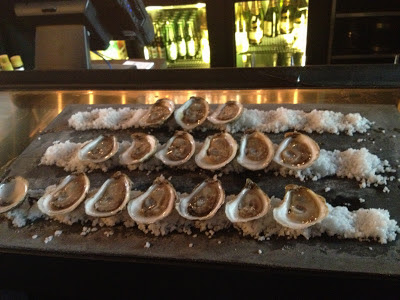 We then had some oysters, very simply plated over coarse salt on a rectangular piece of slate. Very nice. OK, I'm still not used to oysters, believe it or not, but I had a couple that evening and they're growing on me! 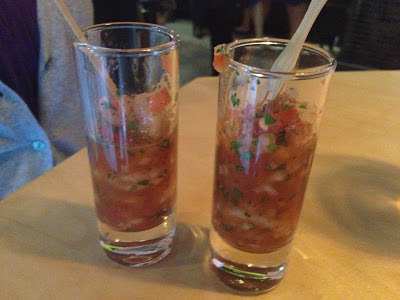 After that, we were served a ceviche in a shot glass. On the menu, they're calling it Ceviche Guatemalteca (side note: the waitress, instead of saying this, said ceviche Guatémalien, which isn't really a word...). She was nice though so we'll forgive her! This dish had shrimp with tomato, onion, coriander and lime. After I had eaten the shrimp, i took a shot of juice! What? It was good juice! 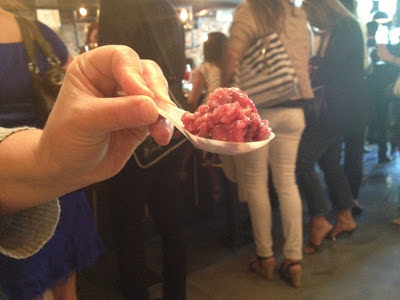 Then, the beef tartare. Unfortunately, I wasn't too pleased with it :( It had big pieces of meat and I like my tartar much finer. Also, I found the portion to be too big (you won't hear me saying THAT every day). And the addition of capers and mustard did not save it. It remained a bit blend. 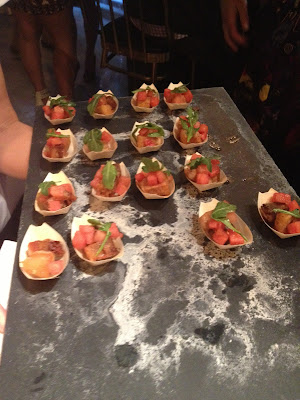 The disappointment of the evening: pork belly with watermelon. First of all, what a funny combo. Second of all, the pork was way too tough and dry to be enjoyable. It was quite a let down, because before it entered my mouth, that piece of pork looked goooo-hoood!

So, basically, all in all, the food was good but not exceptionnal. It's a good thing I was there for the bubbly because if I'd gone there only for the food, I would have been disapointed.

The service was amazing. They were clearly overstaffed but that's what you have to do on the day of the opening (or the pre-opening in this case). There was always someone available to answer our questions or to, you know, give us a drink. We talked to Laeticia, this charming waitress who knew a lot about the bubbly and the champagne. It's always fun to know that the waiters and waitresses know their stuff. And since there were many of them, no one was running around like crazy, even the bartenders seemed chill. Even later when there were more people, they just kept on giving away food and drinks and they were still moving at a normal pace :)

At first, it was an older crowd, perhaps 40's, 50's with a small amount of younger peeps (most likely including my fellow bloggers!). As the evening progressed, a lot more people were coming in, most of them in their mid 20's and 30's. This included a couple handfuls of actresses and actors like Christian Bégin from Curieux Bégin, Catherine Proulx-Lemay from one of my fave french shows, Unité 9 and Anick Lemay from Mauvais Karma and of course from Uniprix fame ! :) 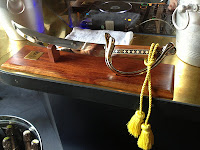 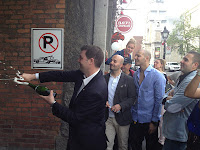 One of the main events was of course the uncorking of the bottle with a saber (sabrage or sabering I guess?!)!!! So cool to see :) They of course did this outside but then they did it a couple times inside as well. Hum, I guess there's going to be lots of liquid on those floors!
Alright, and now, the scores!

Such a great new place to go have a couple drinks and maybe also eat some food! Try the cocktails, they are well worth it! Don't forget, they have something for every budget!