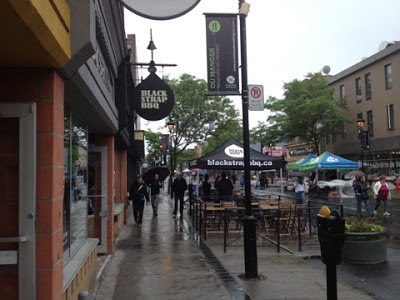 On a rainy day, Isa and I decided to visit a restaurant we'd been meaning to eat at. So we took our butts to Verdun, rue Wellington. 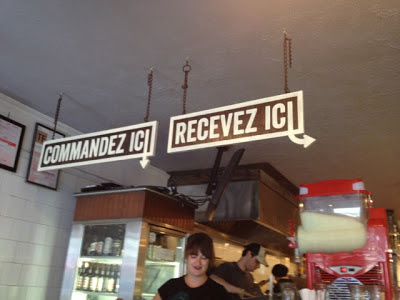 This place is tiny, much smaller than I would have expected even with the reviews I had read before going. It had two large picnic tables and 2 counters where people can sit at. You have to be ready to share your space. What you do when you come in is order from the girl at the counter and bam, not even 10 minutes later, you got your food! Oh and the place smelled of smoke from the smoker... twas very nice!


We got the brisket and the ribs. Both came with coleslaw, a cute little bread and a side of our choice. I had the macaroni and cheese (which came fried in a little pocket of goodness) and Isa had the veggies (kale and I dunno what). We also had some fries. Because who can eat ribs without fries I ask!? 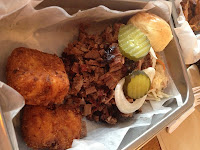 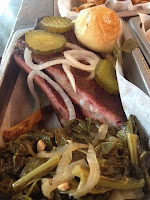 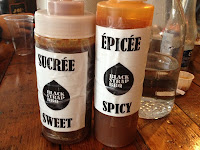 Let's start off with the coleslaw. It was OK but too vinegary and not salted enough. The mac n' cheese was very good and I found it quite original but again, it lacked seasoning. The brisket was dsaaaamn fine: flavorful and well seasoned and went really well with the lovely BBQ sauce that was provided. Speaking of BBQ sauce, there was one spicy one that was a tad too liquidy and too vinagary and sweet one that was just perfect (but a bit of liquid smoke int here, we both agreed, wouldn't been even greater!)! The fries were good, obviously homemade, but I thought they weren't salted enough. On the other hand, Isa liked them a lot! The ribs were good but we're used to sauced ribs and not dry rubbed ribs so it was different. You can add your own sauce, which is nice but I still think they should have both on the menu! 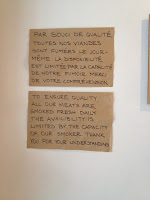 Now, everything you get, meat wise at least, is ALWAYS fresh. Why? Well, they have a small-ish smoker and they smoke that shiz once a day so when it's done, it's DONE! And this is all written on the wall :)

The service was very pleasant. Well, they don't wait on you but still. The girl was very nice and chipper and we got our food very fast. The only thing is that we felt the girl should have told us about 'Le Gros', this kind of combo of pretty much everyhting on the menu for 35$ and with taxes and tip, we ended up paying about 42$.
And now, the scores!

If you like BBQ, go there, you'll be pleased.

I'm a foodie. Sincerely, I have to agree with your "haters" from your previous post. If you post your own and honest reviews, you probably won't get these kind of people. And you won't have to resort to emotional support from your virtual friends. The best way out of this, is that your friends post their reviews directly on Urbanspoon and Yelp so that you don't take up all the credits... Sorry it's a harsh thing to say but it is the truth. (Take it or leave) There is nothing to be proud of being on top if most of the reviews are written by someone else. Take it as an advice not as an insult. Have a good day.

What you guys don't get is the fact that I'm not accepting my friends' reviews to 'get ahead'. I'm proud that my blog is 'on top' as you say... but that does not mean I have to write every review. Many blogs have more than one writer.

Look around you, there are worst things going on in the world than Marie sharing her blog with her friends, and I checked the rules, nowhere does it say you have to read these comments and make a big deal out of it. Franchement... -Serge

hahaha! Serge, I love your answer!!
@Anonymous: stop being jealous!