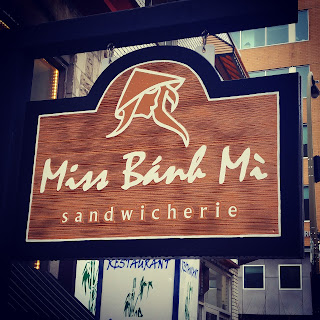 I loves me a good banh mi. I made a list of banh mi places in Montreal and Miss Banh Mi was next on ma list! Plus, it's on my way to and from work. What did you say? Yes, you're right, it's in the perfect location. 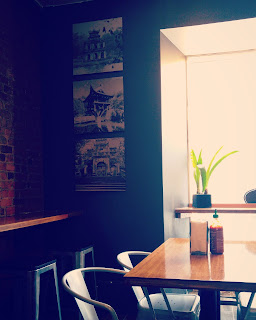 Miss Banh Mi is actually in quite a large space on St-Mathieu, downtown. It came as a surprise because I'm use to restos that serve banh mi to be tiny! Well, except for Vua, but that dson't count, iz a chain! Some techno music was playing? OK, that's not a question, that's a fact. You know when you say that music just dson't fit? This was a big example of that. I really dug the brick walls and the pictures printed in sepia. There were wooden tables and silver chairs, but not enough. I'm the first one to say it when there's no room to move around in a resto, but it equally sucks (for them) when there are not enough tables. You are LOSING money, people. 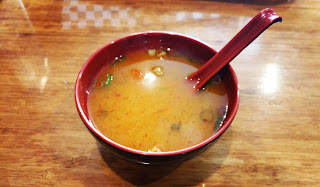 The Tom Yum soup, although very, wait for it, yum-my (ya, I'm THAT good), was a bit  too sour. Guys, I know it's a hot n' sour soup but this was hot n' sour n' sour. I think the culprit was the piece of lemongrass that was stewing in there. There was some chicken that was very tasty and oozing with flavor, some green onions that, hello, and lime that gave it a nice kick. It was just spicy enough. 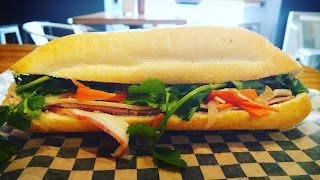 Le banh mi. I've eaten banh mi before. Lots and lots of them. I'd like to say I've been to Vietnam to eat them but sadly, that wouldn't be true. I will do it in the future though, I swear to Heysus. I had the traditional banh mi: lots o' meat, pickled carrots and daikon, cucumber, coriander and some sauce. The whole thing was very fresh and the baguette was just A+ and not stale at all (which would be D-).  The veggies could have been marinated a little while longer to let more liquid seep in for some extra goodness. There wasn't nearly enough cucumber OR daikon. And I LOVES me some daikon in ma banh mi! The sauce was somewhat of a BBQ sauce, which was different than the usual mayo type sauce. A good different. The pâté was BANG on and the cold cuts also. Not too salty, just fatty enough to have lots-o-tastiness. Everything, as I've said, was very fresh.
Service was, well, counter service. At first, I didn't get much of a smile from the woman working there. But she did give me water quickly and le food was ready in a flash as well.
And now, the scores!
Food: 7.5
Service: 7.5

Well, I have a bunch of other banh mi restos to try. But I have a feeling I'll be back. Oh, imma be back, yo.