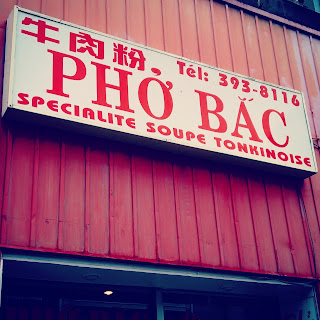 When you're sick, you need a couple things: your mommy, Perrier, lemon and ginger tea and a good soup. This is why, when I was sick as a dsawg last week, I went for some pho. I asked my Asian persuasion friend, Jer, who, coincidentally, is in Vietnam right now, where I should head for some good pho. He mentioned that Pho Bang New York is a fave but HIS fave (in Chinatown) is Pho Bac 97. 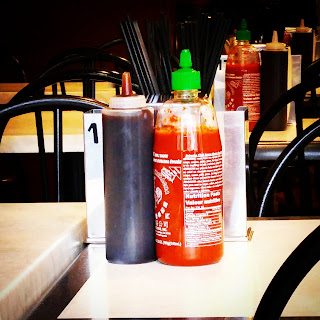 Pho Bac 97 is located at the end of Chinatown on St-Laurent. OK, saying it's the end of Chinatown ain't sayin' much; it's so small that it's like pretty much when you get in, you're out again. The place itself is like a lot of Asian restos: lots of tables, a tad crammed, pots on tables with chop sticks/napkins/sauces, no music. Basically, get in and get OUT! 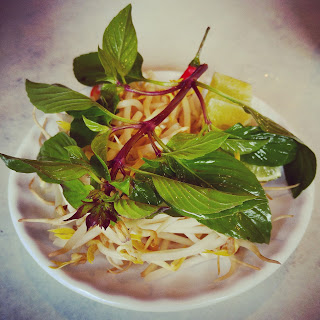 The fillers, as I like to call them. Or... the garnishes? Whatever. That! The essentials, basically. Thai basil, bean sprouts, chilis and lime. 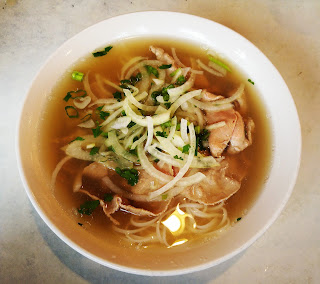 I had the #7, or the beef pho. The broth was just awesome and so damn meaty and oniony. You KNOW how I feel about ma onions! The meat had had too much time to cook in there, damn it! It would have been even better with it being a tad less cooked. The noodles were cooked to perfection: not quite al dente and not soggy either. Oh, and I practiced my noodle slurping technique! I believe Jer would have been oh-so-proud. The coriander was oh-so-fresh, which made it oh-so-yummy. Putting the thai basil, the bean sprouts, the hint of lime in there was just the cherry on top. Oh and don't forget the hint/heat of sriracha. YA BABY! What better thang to help my sickness? NOTHING! I obviously added some sriracha in there to make it spicy and also to sweat out all the sick! And it worked btw.

Service was very quick. It's like, you turn around and BAM, there's tea. BAM, garnishes. BAAAAM, your meal is there. Very efficient. It would have been nice to have water tho. I only thought about it at the end of the meal. I think tea is like water to Asians. And yes, I'm very deep. Totes. Oh I must also mention that when I went to pay, the man at the counter told me they only accepted cash and I was like DANG! He told me I could either take out some money at their ATM with mucho dinero charges OR come back another day! Uh, what? 152 points for niceness right there! Actually, going back tomorrow to pay the nice man. And trust me when I say I'll be giving a GENEROUS tip!

Well, obviously I'm going back. To pay AND to eat some more amazing pho!