Agrikol is Régine Chassagne's baby. If you don't know who this is, I can't talk to you. Haha. Just kidding. But really not. She's only the singer/head girl of Arcade Fire, one of my all time fave bands. You can see why I HAD to try Agrikol. Well, also because I've been dying to eat Haitian food. So, on a Sunday a couple weeks back, i headed there with Dan (the owner of my fave Barcola Bistro) and Vino (one of my faves I hadn't seen in way too long). 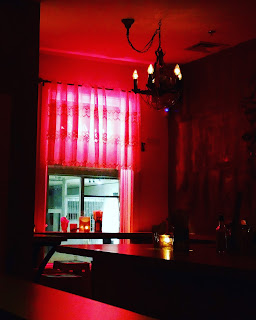 This place is located on Amherst, in the village, in this cute little house with a pink neon sign on one of the windows. You get in and its two stories (although the second floor was closed because it wasn't a busy Sunday), with the first floor having about 26 seats I'd say. I didn't count (I usually do), so I may be wrong. 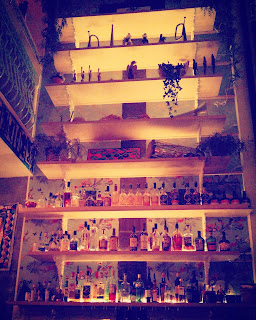 You literally feel like your somewhere else, which is always nice, especially since THIS place was full of snow. What I can only describe as 'island music' was playing and even I felt like dancing (yous that know me KNOW I dsont dance). The place felt very warm and inviting and the hot waitresses helped too :p 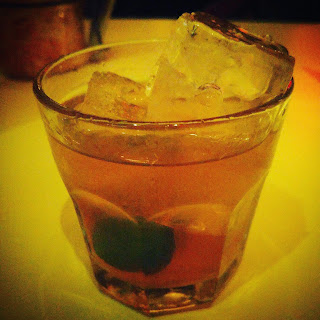 The menus were on the table when we got in so we quickly ordered drinks. I started with the Ti Ponch because hey, what sounds more Haitian than that? Lime, Barbancourt blanc and cane syrup. I think I was drunk after two sips, I kid you not. It went from 'Good day sire, I am writing a review for my blog' to 'Bood gay shire, ndasknkshdskhskand mog'. I MAY be exaggerating. But only a tad. Man that drink was strong! I likes me a strong drink but DANG! Apart from the HIGH AMOUNT of alcohol in there, it was very good, very simple, well done. WELL done man. Hey, I'm the first one that says it when a drink should be stronger, so I can't say sh*t about this one!!!

We decided to share plates because what's better in life than sharing? OK, that's a ridiculous question, don't answer that. 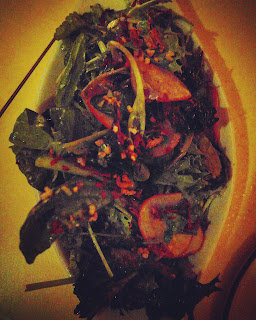 Avocado salad. OR 'find-the-avocado salad'. Ha. Hahaha! But seriously. The salad was really good. Very tasty vinaigrette. And there was just enough too. None of that puddle of vinaigrette business. Ugh. AND NONE of that mesclun business either! Score! As previously mentioned, there was wayyyy more lettuce than avocado, which is disappointing when you order an avocado salad. The avocado was perfect of course, just to make me even more mad that there wasn't as much avocado than I would have wanted. 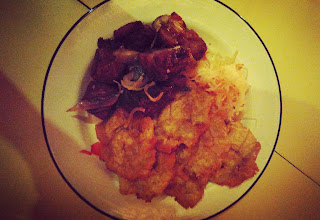 Griot! This was a two parter: griot AND plantain (bananes pezées). Imma say yes to that! I hadn't eaten plantain in what seemed like years! Actually, you know what, it HAD been years. That's just wrong! They had that nice plantain flava but were a tad on the dry side. It's a sad day when food is dry. A sad day indeed. The griot, if you were wondering, is pork. Fried pork!!! Man, that pork was packed with flavour. So much flavour! With those marinated carrots/cabbage that, by the by, were spicy as all hell, it was the perfect add-on. We also had some in little jars on the table and in good ME fashion, I put some on everything. 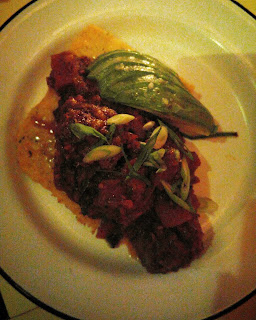 Mais et légumes. The corn was actually polenta and the veggies had been stewed foreva which brought so much yumminess (technical term, of course) to the dish. The polenta was soft but not too soft and just right on. I could have used more. IN. MA. MOUTH. Just putting my fork through it... it was a pleasant thing. And although those veggies were awesome, both Vino and Dan were convinced they had tasted meat. Which is great, I mean, I can always do more meat, but it was weird to order a vegetarian dish with a meaty surprise. 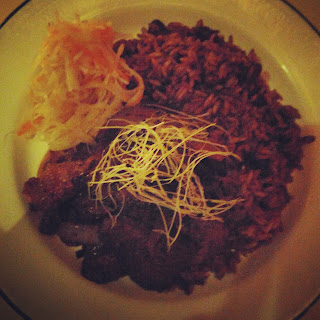 El goat. It's rare that I eat goat. On a Saturday night, I invite some friends over, we open a nice bottle of wine and we eat... GOAT! No, that does not happen. Like, ever. The meat was very moist (God, that WORD!), although I found that the fat to meat ratio was a bit off. I told someone about this later and they said 'hey, you wanted to eat Haitian food? This is how they do it'. I'm down with that explanation but I also think too much fat is too much fat. Anywhere. Anytime. Nevertheless, we all know what more fat means: more flava flav! And it WAS tasty, but again... the fat!!! It had a certain spiciness to it which appealed even more to me. The beans were perfectly cooked but the rice was a bit dry. 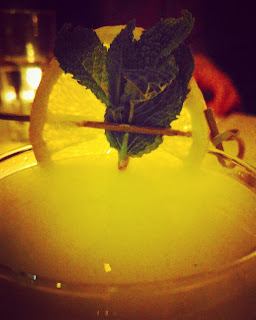 Le Mant: ginger, suze, mint and the pièce de résistance, ruuuum! The kind of drink that, when you take your first sip, your taste buds go all cray cray. Wow! That ginger was nice at first and then became a bit too present. That mint made me think I was drinking one of my all-time fave drinks, a mojito. Oh yes! The suze was there to add some citrus flavour and the rum was... oh-so-present! Hahaaha!!! Another strong drink! 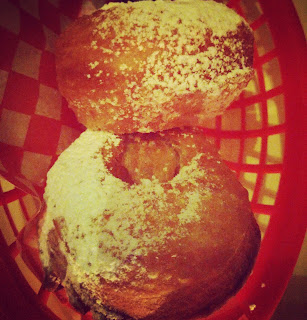 One of the desserts! Les beignets. They were hot and sweet but not toooo sweet. And you know what else they were? They were moist. Moist, god damnit. We ate them in 3.5 seconds. No joke. 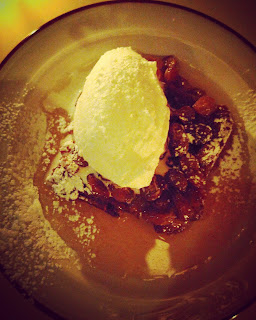 The second dessert, the pain patate. Because THAT sounds like a great dessert? Hahaha. I'm kidding. It's just that 'pain patate'... the image that I had in my head was sooo not what we got! I was literally picturing a potato with, hum, a piece of bread?! Ish. Ya, I'm stoopid like that sometimes. This was MUCH better than a potato on a piece of bread :) Made of sweet potato, vanilla and cinnamon, it was topped with some rehydrated raisins that were just so soft and tasty. On top, something that we described more as semifreddo but could have been harder whipped cream... Definitely not ice cream. The important thing is that ma mouth loved it. I'm not one to appreciate fruits in my desserts but this was different. Everything went well together and it was just SPLENDID.

Service was OK. Not great, not bad: OK. We got our first drinks in the nick of time but then when it came to my second drink, she really seemed to have forgotten, and then upon realizing it, she brought it as fast as she could. We were talking and not looking at the menu when we first sat down but after a while, we had obviously stopped pondering and it took a while for our waitress to come to the table. I am resto-difficult, I know this. She explained the specials very well though (8 points right there!) and she checked on us at some point. Water could have been refilled---to be honest, I don't remember if we had a pitcher on our table or not, the point is we were lacking water at some point.

Not sure I'll go back, really. It was good, and I'd like to try more things on the menu but then again, there are SO MANY restaurants in Montreal. I'm talkin' millions here.