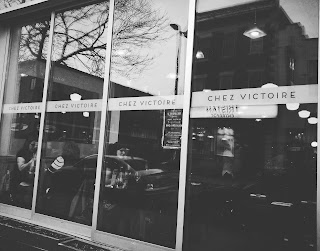 One of my pals at work, Margo, knows someone that works at Chez Victoire, therefore knew about their super awesome Sunday night special: table d'hôte 4 services for 30$ instead of 45$. That's the kind of deal I like. Excuse me, LOVE. 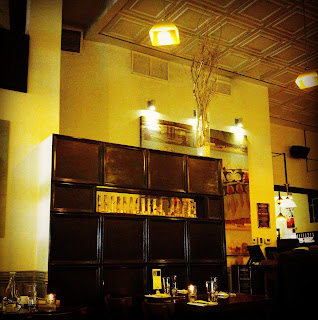 I went with ma gurl Vino, whom, by the by, I don't see nearly enough. On top o that, she's such a fun dining partner! Chez Victoire is located on Mont-Royal near Pap (that's cool talk for 'Papineau'). It's quite a large restaurant, with booths on one side and tables on the other. It has uber high ceilings, like, 3 storeys high. I swear. The place has a nice classic look with moldings on the ceiling, wooden tables, and leather booths. While we were there, I think they played the whole Gorillaz CD, which was much appreciated.

We could choose one dish out of three for every service save for the dessert where it was carrot cake. Just dandy with me! 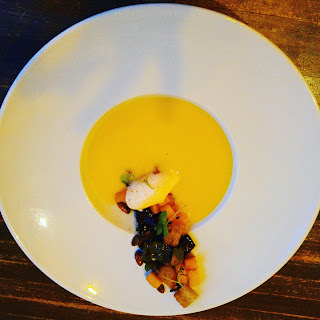 Cream of butternut squash, shishito, pumpkin seeds, crème fraîche au pimento. Yes, this description is bilingual, deal WIT it. First off, the bowl was hot, which is always a winner in my book. This was good. Like goo-hood. I believe what came out of Vino's mouth was 'mmmmm'. It was soft, sleek, buttery, and all that goodness! The croutons weren't too hard OR too soft and they were also oh so full-o-butta. Mmmmm. Butta. The crème fraîche was right ON and somewhat tasted of smoked salmon which was awesome paired with the cream! All the flavours, although all very distinct, went really well together. This was a WIN. 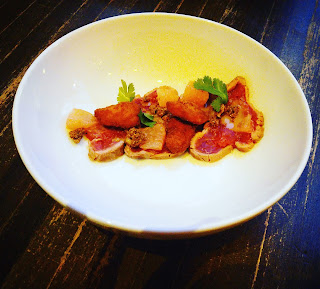 Veal tataki, grapefruit, fried clams, miso, coriander. The veal was excellent, with just a touch of miso on top, which gave it even more flavor (hello, umami). The fried clams were there for NOTHING. Literally, nada. I was actually a bit angry that they were in there. Why? Why ruin a perfect dish? On top of it, those little balls tasted like nothing. And they didn't fit. AND they were over fried. Basically, all bad things. The grapefruit gave a bit of acidity to the dish and it married well with the meat. The coriander was just, well, hello. All in all, a great dish, but f*cking clams had no reason being there. 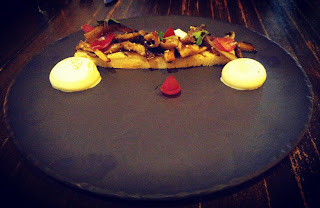 Pleurotes with thyme, hazelnut, red onion petals, pain brioche. I loves me a good pleurote. Especially with thyme. Thyme and mushrooms, in ma head, is a match made in food heaven. They could have been warmer though. They were in temperature limbo: they had been somewhat heated up, but just not enough. They'd been sautéed, most likely with butta, so, you know, YUM! I would have liked the bread a bit crispier and more grilled (grillier?). The cute little onion petals could have been more present. Le cheese. I gots to say, usually, I ain't no fan of strong ish type-o-cheese. But this was niiice! It was in a mousse too. I'm a fan of mousses. Yep. That lovely mousse on a bite of bread and mushroom was just T--H--I--S awesome. You may have noticed the long 'this': well, it was THAT good. Sometimes, I conjure perfect bites. And there it was. It was a great mix match of tastes. 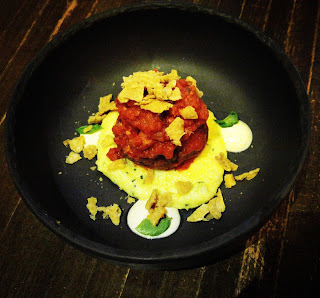 La meatball. That was one big meatball! It was big, it was moist (watch out, it's getting sexual), it was full of herbs (end of sexual talk).The crispy chicken skin on top was way too salty on its own but was bearable with other components of the dish. The sauce was a bit too simple for our VERY REFINED palates. Hehehe. But seriously, it just tasted like store-bought tomato sauce, which is not really what you look for when you eat at a restaurant. The polenta was a bit dry but added a certain je ne sais quoi to this. The harissa yogurt (or should I say harrisa-ed yogurt?), was excellent. Just a bit on the spicy side, which is a side that I like. Everything worked, but there were still a bit too many components here. It's like: 'what do we have in the fridge today?'. 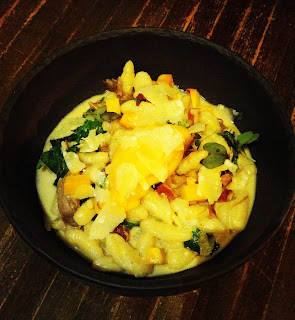 Pasta! I rarely eat carbs. Actually, the only place I'll eat pasta or rice or bread is at a restaurant because I don't even have any at home. I actually gave away my toaster recently. Ya, that's how rarely I eat it. Cavatelli with ricotta, duck confit, lardons, sage, butternut squash and parmesan. I'm sure you guessed it but this was a major 'what do we have in our fridge today' kind of dish. Actually it was THE 'what do we have in our fridge today' dish. A blind person could have picked better ingredients. I don't know if this makes sense but I'm stickin' to it. The whole time we were eating it, we were looking at each other like 'waiiiiit, what the hell iiiis this?'. It wasn't totally bad but it wasn't the best thing either. To have some squash puree on top of your pasta is, like, WAY too much. Something else was way too much: having duck AND lardons in there. Again, why? The noodles were perfectly cooked but the whole dish was too salty and the sauce wasn't consistent enough. Needless to say, not our fave dish. 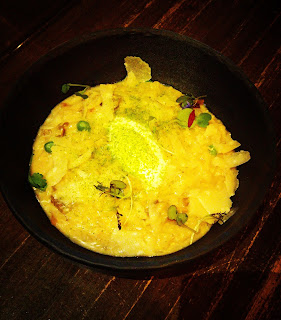 Risotto! I loves me a good risotto! The crab des neiges was, if there was any, broken up in very tiny pieces. I don't think I managed to actually taste it. Vino tasted it a bit, or so she thought. For all I know, there was no crab in there. The mushrooms tasted almost meaty, which is what I like when I eat a mushroom. They were oozing flavor. Getting a weird image here. The rice was a tad on the overcooked side for risotto but I like it that way. The cream on top was too much, I found. A bit less and it would've been perfect. The whole thing tasted of lemon, which was nice and refreshing and gave some lightness to an otherwise heavy dish (when is risotto NOT heavy). There was a bit of pesto which was actually very good mixed with the other flavors but there was too much cheese. Put cheese, yes. Don't put TOO much. 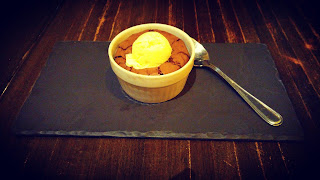 For dessert, it was supposed to be carrot cake, and then they brought us chocolate fondant and I was happier. I LOVE carrot cake, but I have a special place in my heart for fondant. I'm not even going to go into details but that sh*t was GOOD. OH. And there was ice cream on top (as it should be every time fondant is served) and tasted special. We wondered what it was for a good 8 minutes. The waiter came by and he told us it was bay leaf ice cream! What! I have neva eva EVA heard of that. It was very good, and just herbal enough. Awesome ice cream. YES!

Service was OK. I have to say that it was rather slow between courses and it took us a long while to get our first dish. You know when it takes so long that you start turning around to see where your food's at? Ya, that long. We were having soup (obviously ready) and tataki, most likely already cooked... SO. Water was on table and service was very professional. But it was slow. We just didn't understand because when we got there, the resto was almost empty.

I enjoyed going there and getting four dishes for 30$. I will also enjoy other restaurants for the same price. Just sayin'. Not totes against going back but hey, as I've said before, so many restaurants, so little time.