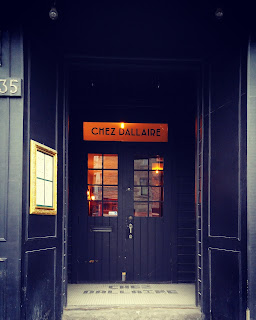 This place was on ma list. Two weeks ago, I was supposed to hit up Chez Victoire and then plans fell through, bla bla bla, and it took me a good 40 minutes to figure out where to go instead. It had to be on my list, not too far, and, the clincher, open on Sunday. Chez Dallaire was the winner. I met Daiz there for dinner and drinks! Because, in life, what's better than dinner and drinks? The answer is NOT MUCH.
The place itself is located buttf*ck nowhere. That's where. I'm sorry, I didn't mean to curse like that. It's on Wellington where no one goes, like, ever. It's on a very sad strip of Wellington between the happy stores and restos in Verdun and the trains and all those container yards. Exciting, right? NO. Basically, a no man's land. 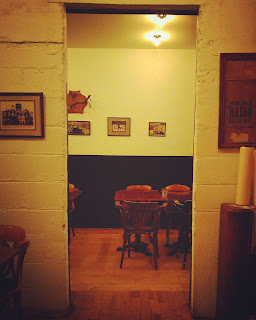 Music was quite loud when I got in and then they calmed down a bit on the base. It was heavy metal music at first but then they started putting classics from the old days (my high school days), which was great! Daiz and I shazamammed all those bad boys. It was nice to hear Matthew Good Band, which, excuse meee, I've seen twice in concert, and Fatboy Slim, which I'd hoped I'd seen twice in concert. It was a cozy space, separated in 3: when you got in there was the bar with a space for dancin', on the right, a space with some tables and on the right another room with some booths and more tables. The look was classic: brick walls, forest green chairs, wooden tables and light brown booths. Wooden floors, some candles and art on the walls completed the décor.
We arrived right before happy hour was done so hello 5$ glass of wine! I believe we ordered at 6h59. It was cutting it a bit close! We were to share the food because SHARING IS CARING... and things like that. 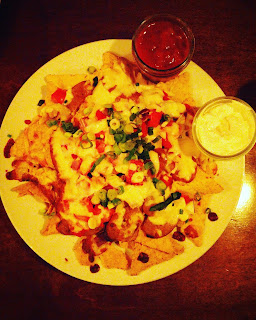 Los nachos: house pork sausage, red peppers, green onions, L'armateur cheese (which I can't find anywhere on the net... whhhheird) with sour cream and salsa. They weren't cheap on the salsa nor the sour cream, I'll tell ya that much! The peppers were grilled very nicely and full of flavour, and the green onions added a nice tang to the dish. Yes, a tang. TANG. Not a thang, a tang! You must get it by now. The sausage was juicy and spicy and I would've wanted more! Speaking of more, the nachos to toppings ratio wasn't awesome. Way too many nachos for the amount of toppings. Or more like not enough toppings for the amount of nachos. 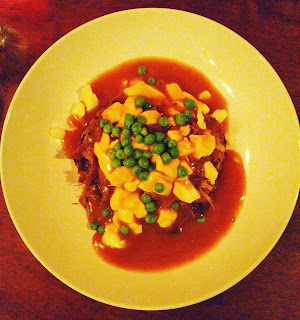 The Dallaire poutine. This was interesting. Instead of fries, it was somewhat of a shredded potato patty which I found great! I believe the word I use was 'wow'. Yep, I went there. I enjoyed this 100% more than regular old fries. The duck was a bit dry (it seems to be a recurring thing recently) and the sauce was a bit too salty. I must say though that it tasted way better than the usual brown sauce. Ugh, brown sauce. The peas were nice and completed the 'hot chicken' look. The cheese
Service was wonderful at first: I got seated in 2 seconds and while I was waiting for Daiz to get her butt there, I got the two boys comin' over, asking me if I wanted anything, bringing me water, bringing me the menus... And then we were ready to order and suddenly, no one was there :/ I MAY be exaggerating... one of them came about 5 minutes later. Five minutes is long when you're starving! They didn't ask us if we liked our meal but the food came in a timely fashion.
And now, the scores!
Food: 6.5
Service: 7