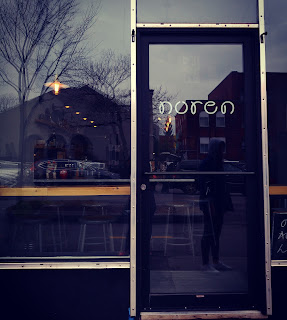 Noren was, wait for it, you guessed it, on ma list! Easter weekend, since my brother was in Toronto, my mom was in freaking Greece and my dad was in the Dominican Republic, my sister-in-law Chris and I decided to not let this bring us down and celebrate the right way: by going out to a restaurant. I gave her three choices and when she chose Noren, I gotta say, I would've chosen one of the two other restaurants first (Butterblume or Maison de mademoiselle dumpling). 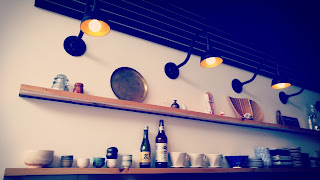 Well, turns out Chris was totes right here. I ended up being uber happy with her choice. The place itself is super duper small. Think, the size of a closet. Or maybe a shoe box. Or perhaps a matchbox. And I've gone and exaggerated again. But it's oh so kawaii! That means cute in Japanese btw. Ya, I'm totes fluent. OK, I'm kidding. It holds 10 seats, including some at the window, with a marble counter and a small ass kitchen. You know, those small ASS kitchens? Mmmmright. It had high ceilings, including one wall dedicated to the menu on a black board. Also, some knick knacks/dishes/Japanese thangs on some shelves behind the counter. Very cute place :)
They brought the whole 'small menu' idea to a whole other level.  Two choices on the menu plus the dish of the week and some sides. Oh, and one dessert, of course. I LOVE small menus. I. LOVE. THEM. 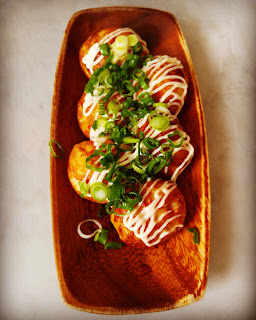 Takoyaki. Or octopus balls. Hehehe: octopus balls. They made this with love, man. Love. The couple were both taking turns at the hot plate, turning them balls, makin' em perfect and shiz. You could choose your sauce and we chose sumthin yummy: ponzu. Ponzu is citrusy and, as previously mentioned, yummy. The balls were a bit too doughy for my taste but only slightly. I understand why the Japanese eat this as a late night-during/after drinking street food. The ponzu sauce was perfect on there and it was great to have something citrusy to balance out the fried stuff. The octopus was perfect, and not, you know, squishy. Bah: squishy octopus. 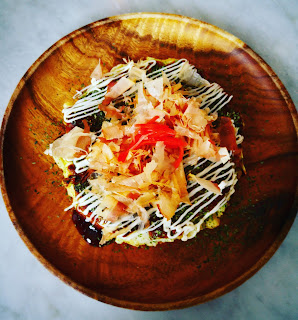 Okonomiyaki: omelet with cabbage, pork OR shiitake, okonomi sauce, seaweed, mayo, bonito flakes and ginger. We ordered it with pork. We don't believe we had any pork in there. But, you know, who CARES right now, because the rest of it was just, pretty much one of the best damn omelet I've ever had. And I'm serious. Both Chris and I thought it, and both our mouths went 'mmm'. Un vrai coup de coeur! The cabbage was still a bit crispy and not too, how can I explain it, cabbage-y?! The bonito flakes were just wow, adding umami to the dish. The okonomi sauce (ketchup, Worcestershire, honey, soy sauce) tasted almost like unagi sauce. It was nice and thick and oh-so-tasty. I could have eaten at least two of this moist, very flavourful  piece of amazingness. 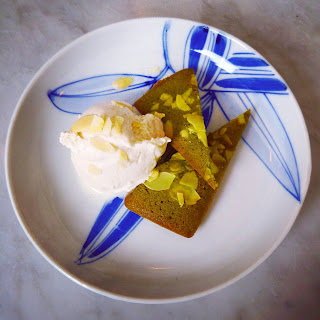 The matcha financier and vanilla ice cream. Matcha WHAAAAT? They had us at 'mat'...or something clever. I was quite disappointed to know that this really great tasting vanilla ice cream wasn't home made. Especially when they told us that they usually make it. Damn it!!! The thing with financiers is that half the time they are too dry. To me, anyway. I need a MOIST financier and I got it here! There was just a hint of matcha and, although that was nice, I would've liked more! I know it's an acquired taste but hey, if you haven't acquired that taste, dson't dso Japanese!

Service was great throughout. Uber friendly staff and smiles all around. I believe the waitress that came in was one of the owner's sister. It's all in the family! We got water refills and the food came in a timely manner. It was just fun looking at them cook, pretty much right in FRONT of us.

You better believe I'm going back!