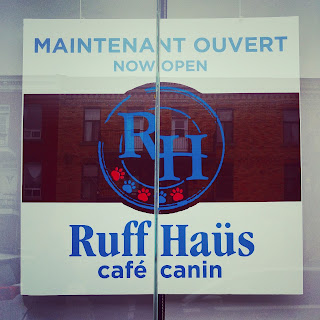 Ruff Haus is the new dog café in Verdun (so new that they don't have a real sign yet...). I happen to be good friends with the owner of the first one in Montreal, Le Doggy Café, so it was great to be able to compare them. I loves me a good resto comparison. I strive on it. I live for it. I'm totally exaggerating. Big time.

Ruff Haus is located in the old Jo Blo, which had a very eclectic décor. Well, you know what? Ruff Haus kept the EXACT same décor. Jo Blo was somewhat of a steak house with very dark walls (some might call them black), big couches, two life size horses with stuff written on them like the name of the old restaurant, and frames on the walls of pin up girls and what have you. The only dogs on the wall were at the front and they were, well, ugly. I'm sorry, I don't like ALL dogs and they were those small dogs that just do nothing, you know! Anyhoot, needless to say that this wasn't my most liked decorated place.
They have a liquor license, by the way, which they probably also kept from Jo blo, hehehe. I'm kidding, you can't do that! Oh and I must mention that it was written on their facebook page AND on google that they were opening at 10am but they ended up changing it to noon. Lucky me, I passed by after gym, saw it was still closed at 10h30am and called closer to noon when someone picked up. When I got there, at least 4 or 5 people were waiting up front. Not cool. 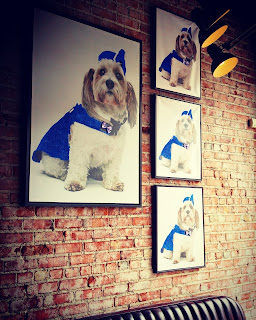 Comparison to be made: at Le Doggy Café, dogs can roam around freely, they can make new doggy buddies and frolic around like it's 1999. In this resto, dogs have to be kept on a leash, which makes things a tad less exciting. I thought this was about laws and licenses and what not but my friend told me it's a choice! What fun is it for a dog to be amongst other dogs if they can't play together? What was nice though is that as soon as you sit down, they bring a little bowl of water for the doggies. We were there for a while and they never asked once if the dogs should go outside to pee. Actually, we saw them pick up the pee of a couple dogs. It happens, I know. It would happen less if they would mention the outdoor peeing.

Their menu is all over the place. I'm talking like Italian meets Korean, or Chinese meets Caribbean. Ya, ALL over the place! Example: they have an item on the menu that comprises of fried chicken and waffles AND mac n' cheese. What? They have bagels, they have crepes, they have the popular avocado-on-toast and then they have lentil soup, hummus, corn dogs and sides of marinade, extra veggies, extra fruits, and smoked meat? I just don't get it. I had an even weirder dish... 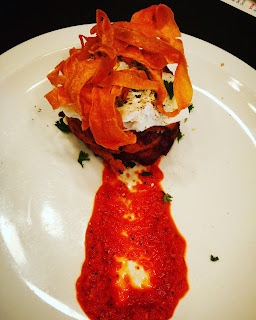 Polenta with a poached egg, ham, cheese and red pepper coulis. Weird sounding, right? Right. There were some crunchy parsnips on top which were sweet but a tad over fried. Parsnips are SO in right now. The egg was perfect. I loves me a perfectly seasoned egg! The coulis was a bit grainy although it strangely went well with the rest of the dish. The polenta was a PLENTY. Dsamn! I swear, this is how it went down: 1st guy: 'How much polenta should we put on the plate?' 2nd guy: 'THIS much.' 1st guy: 'A tower of polenta it is then!' Ya, a tower. I swear it was 6 inches high. And by 'I swear', I mean 'around' 6 inches. The polenta was cheesy and crunchy on the edges but there was just too much of it! On the other hand, there wasn't nearly enough ham. There were only tiny little pieces of it. Meh.

Service was good. They checked on us, they brought us AND the dogs water and they were patient enough to wait for us to order because we were waiting for a friend.

And now, the scores!
Food: 7
Service: 8
Obviously, I'm biased (and damn it, I tried not to be!) but I'll go back to Le Doggy Café before I return to Ruff Haus.