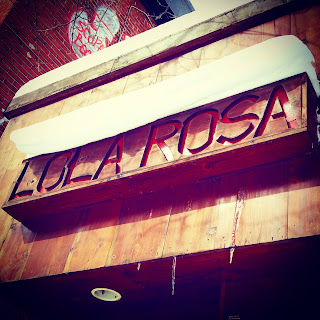 Last time I went to Lola Rosa in the McGill ghetto, it was roughly around 15 years ago. You know what this means right? I'm f*cking old! But seriously, all my best friends were at McGill at that time so I was spending about 92% of my time around there. You know, hanging out, going to bed at 4 am, smokin' da ganja, drinking, doing...other stuff :)
I remember going to Lola Rosa on Milton two or three times and all those times, I had ordered their famous nachos. I must've been high. This time, I was going with my lunch time buddy, the Asian persuasion man himself, Jer bear. Disclaimer: Jer is in, wait for it, Asia, for 6 weeks so I am skipping all those outings in solidarity. I'm kidding of course. Note to Jer: I luv u. 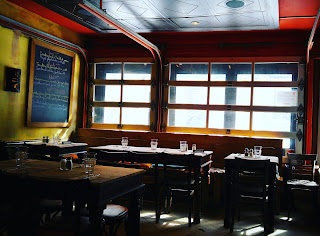 This resto is vegetarian/vegan. And one of the best and most popular at that. Lola Rosa has gained popularity over the years, so they have a second resto on Parc Ave in the Plateau/Mile End area (and a super new baby on William). I've been to both and I can say that I prefer the food, the ambiance AND the actual physical location of the one in the ghetto. It's just much more homey and comfy. With around 30 seats in house, it is quite the small restaurant. It's a good thing I got there early because everything was reserved except for a couple tables. You could see that most reserved tables were for regulars; most likely McGill profs and downtown workers. Some nice chill music was playing, which, by the way, became only background noise when it got full: the noise was akin to a full bar. It was very loud in there. Like, too loud: we almost had to scream. Dudes, I'm serious. 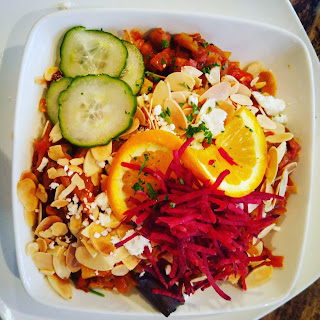 I had the Tunisian ragout. It looked awesome. You eat with your eyes first, right? Right! It was oh so colourful! I loves me a nice colourful dish! Let's begin. Bulgur. This was the base of the dish. I love how they chose this instead of the usual couscous. It was cooked to perfection. I've had overcooked bulgur and undercooked bulgur. I think bulgur is hard to gage. Or maybe that's just me. In any case, the gaging here was done to perfection. The almonds gave such a nice taste to the dish. They were hot from the pan and kind of charred. They gave a nice crunchiness and smokiness to this ragout. The beets on top were the 'salad' that was included with the dish. Meh. Seriously, those grated beets were dry and pretty tasteless. I dson't need no dry beets on ma shiz. The chickpeas were still a bit hard which pleased me, actually: when I don't want hummus, I don't need soft, mushy chick peas. The feta added some saltiness, the cooked dried raisins were packed with flavor and the onions were great, as always. If I could only marry an onion...Everything tasted of cardamom, coriander, cumin and all them satisfactory tagine spices. Just lovely, really. 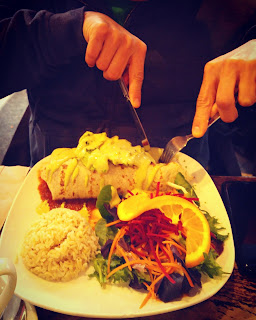 Jer bear had the burrito. Mmmmmburrito!!! I just loves me a great burrito. The beans were well cooked, the coriander was awesome (when is it not, am I right?), the sauce was freshly made, the rice was on par (not dry, well cooked) and the avocado was to DSIE for. I'm a sucker for good avocado and there it was. The salad was 'meh'. Come to think of it, recently we haven't had the best luck with dem salads. Ps: Mesclun should be taken off the market. FOREVER.

Service was good and efficient. They were SUPER busy at some point but everything remained good. Water was in a bottle on the table and they even put a new one at some point. Mucho points for water! Our waitress talked really freaking fast, even for me! She took our order and we got our food quite rapidly. Another girl, let's say she was a busgirl, came to our table at some point and I asked her something in French and she said 'I don't speak French'. For some reason, I was baffled. Flabbergasted. I mean, come ON! I'm not a major Loi 101 supporter but you work in Montreal, I expect you to speak a bit of French!

If my life follows the same pattern, I'll be back in the next couple years :)