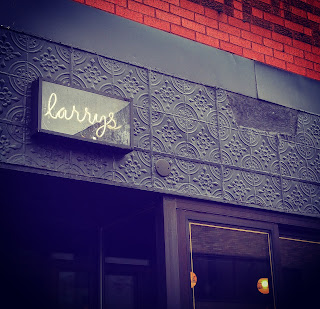 Larry's was on my list. OK, this is how it goes: I have a pretty extensive list of restaurants I just need to try and when I go out for lunch/dinner with friends, I always look at my list first. Larry's was located right where I needed it to be: mile end. I was meeting my baby gurl Isa for lunch before work! FYI, Larry's is Lawrence's baby boy. Lawrence is ALSO on 'the' list. 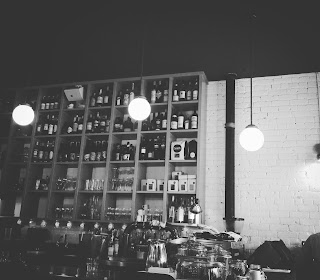 The place itself, at 11h40AM was full. FULL! WTF! Dsamn man. With around 16 seats on the floor plus 11 at the counter, it was pretty small. It had a nice ambiance, an open kitchen, actually nice soft-like country music and a VERY hipster-ish vibe. A tad TOO much for our taste.

Mmmkay, so this resto serves up small dishes akin to tapas. I loves me some tapas! Of course, I had chosen them before getting there. Hello, do you not know me? 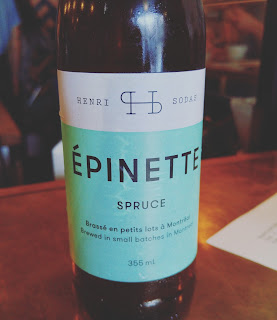 Isa decided to have the Spruce pop. She wanted to have a 'regular' pop, but they don't got any. I tasted it and it just reminded me of Buckley's. You know, that really freaking harsh syrup you buy to get rid of all your germs? Ya, that one. She wasn't cray for it either and half of it was left in the bottle when they took it away. 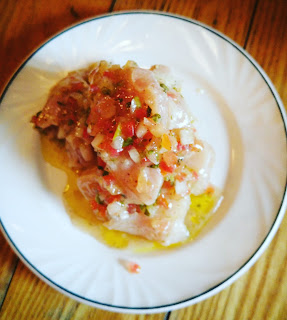 Le ceviche. Albacore ceviche. Hum, yes! I loves me some good albacore. This was fresh. Oh, so fresh! A tad on the oily side but good nevertheless. The pieces were a bit too big for me (for a ceviche, really), but it did taste yummy. Very well seasoned, with a little homemade salsa type thang atop it. Yasssss. 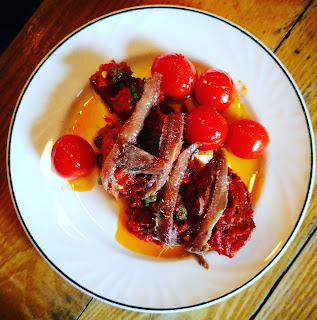 Anchovies and tomatoes. I gots to say, I ain't a fan of run-of-the-mill anchovies. But fresh anchovies? You GOT me! The tomatoes were right on, grilled to perfection. Juices were comin' out of them and dem juices were good! Unfortunately, the bread under the anchovy wasn't day-old bread, it seemed more like three-day-old bread. Meh. And the oil. Why so much oil? Not uber pleasant. 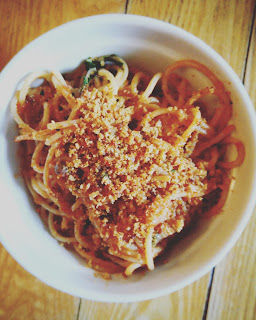 Pasguetti!!!!Spaghetti with bread crumbs, capers, mackarel sauce and herbs. At the bottom, a bunch of oil. But WHY??? The bread crumbs gave it a nice texture, the capers, some acidity and the mackerel just fit right in there. But we were dumbfounded by all the oil at the bottom. WHY?? It was just unnecessary! 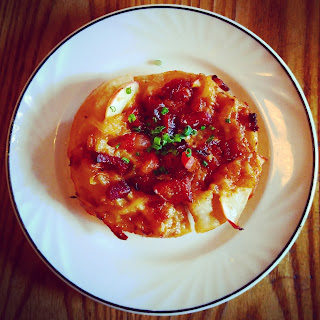 Flammkuchen! A mouth full, really! Hahaha! Akin to somewhat of a pizza. That dough didn't seem cooked enough. Those herbs were lovely though. The flavours were awesome but again, that dough did not seem cooked through. 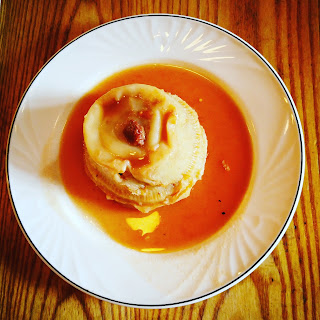 The oxtail. Obviously, we don't get much of this here. Like, ever. It was, again, in this dough. Again, a tad on the oily side. But why? I LOVED the oxtail. Isa wasn't havin' it. I mean, she's from South Africa, where oxtail is pretty much like beef: everywhere! I thought it was tasty and flavourful. It even tasted a bit like cinnamon I thought. She thought it was lacking in flavour. Damn it! 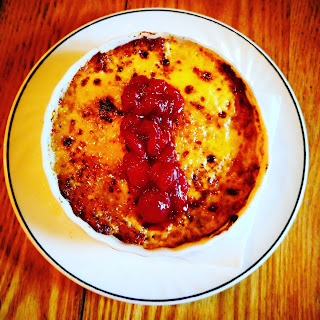 Dessert. Now, THIS was a nice surprise. Rice pudding with custard and torched à la crème brûlée with some cranberry compote on top. I'm pretty much in love with the breaking of the crème brûlée and this was the same. For a second, I felt like Amélie Poulain. The cranberries were very fresh and had a hint of orange mixed in. The whole dessert wasn't overly sweet and it was just so f*cking good. That rice was perfect and that custard was perfect too. Just one bite with all the elements of this dessert was enough for me to make a decision: it was hella good.

Service was OK. As Isa pointed out, it's never ideal to get served by four different people. Totes on her side here. I like two, tops! The dude that took our order had to ask us three times because he wasn't writing it down. Boy, I don't think your memory is as good as you think! What sort of really annoyed me A LOT was the hipsteryness of it all. What IS that hair cut? What ARE those pants? Are those FAKE GLASSES? I know, I know, I judge, I judge. But you guys already know that I am a judger. They looked funny to me but they were still nice kids :) Oh but one of the waitresses had really long hair and I could just see it in the wind, practically landing in my food. Hair and food just dson't go.

We did get our food in a timely fashion tho so that was nice. They did not check how much we liked our meal but one of them explained the dessert in length so that was appreciated.

As you must know by now, I rarely go back to the same restaurant. I guess if I need my oil fix, I will return. Hahaha :)