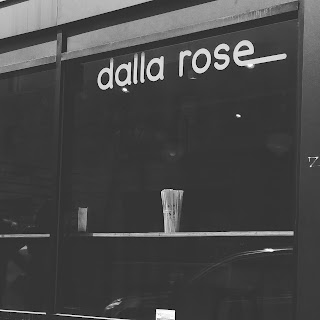 This place has been on my radar for a loooong while. Uh, ramen by two white boys? Imma say yes. If Ivan Orkin can do it, so can they! Ramen 9000 is a (long) pop up in St-Henri in an ice cream shop called Dalla rose. Dalla Rose? Well, it's for chef Michael Dalla Libera and co-owner Nick Rosati. Both hail from Nora Gray, yet another resto on my list! 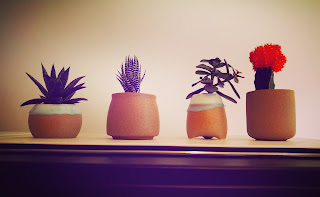 Jer bear and I went there on a cold ass day, last week. It was SO nice to be in a hot resto compared to all the f*cking restos that let in all the f*cking cold during winter. Argh. The place is tiny, with four seats by the window and a counter in the middle. It's a very white place, and I'm not just talking about the boys! Cute little plants adorn the white walls. So cute that I felt like I needed to take a picture. Some funk was playing and I liked it. The stools were very uncomfortable but I guess that's fine because they are mainly used for Summer ice cream eating when people just sit for 3 minutes. 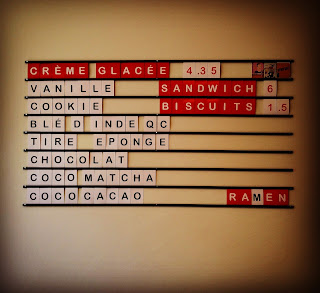 Story is, the two owners went to Japan last year with their significant others and fell in love with vegan ramen. I LOVE my ramen. Jer LOOOVES his ramen. And the quest for the best ramen in Montreal continues! 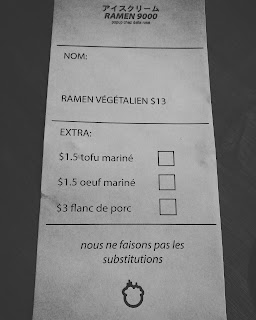 So, as it is in many ramen shops, you just write down what you want on a card. Loves it. Simple. Quick. Efficient. Not 86 choices. 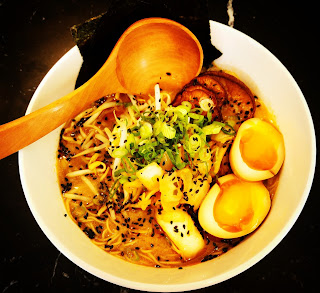 The awesomeness. I had the vegan ramen plus an egg because I'm a big fan of dem marinated eggs. Hello. Heeeeellooooo (is it me you're looking for)! BTW, you can also add pork (a ramen staple), tofu or an egg to your veganism. A great way to get more clients, that's fo shizzle! They are smart, these boys.

We could choose between the larger noodle and the thinner noodle. Jer had the big, I had the small. I found that the broth to noodle ratio wasn't great: I felt like I had a lot less broth than Jer. He told me that usually they go by weight, therefore I was gettin' more noodles because they are lighter. Damn iiiit! The broth was just WOW. Jer and I really had to think long and hard about if it beat out Yokato Yokabai. It didn't, but damn it, it was close! It was thick; just the way we like our broth. How did they achieve this level of thickness without fatty meat you ask? Weeeell, I'm glad you asked! The secret is in the soya milk. First, they make a dashi (with Japanese kelp and kombu from Gaspésie). Second, they make a vegetable broth with ginger, soy sauce, sake, miso, chili paste AND soya milk. Well, and other things too but I ain't gonna broth and tell! I feel like this is a secret they should keep! Seriously, they could win contests! It was VERY good. And that's an understatement!

The shiitake were full of flavor and right ON, the cabbage was marinated (yum!!) and crunchy, the noodles were perfectly cooked. The sprouts were uber fresh and the egg was one of the tastiest egg I've ever had in ramen. Let's just say that for a 12 dollar ramen + the 1.50$ for the egg, I was FULLY satisfied. And then some. Oh, let's not forget the sprinkling of sesame seeds on top. I LOVE sesame seeds. I'd put them in my cereal... IF I ate cereal :)

Service was great. Smiles all around. Water was refilled. The front dude, I believe his name is Nick (I said I BELIEVE) was just AWESOME. AND cute. You know, for girls that like that... gender :p Yes, even if I'm a LESBIAN (argh, hate that word), I can tell if a guy is cute. True dat. When I told him I was a restaurant blogger, he really talked to me about their experience in Japan, and how they went about developing a vegan broth recipe. I gots to say, I'm pretty jealous: hello, awesome ice cream in the summer and f*cking awesome ramen in the winter? YES!

Food: 9. Easily one of the best in town. Jer added 85 points for actually having a vegan broth.
Service: 9.5

Ce fut un GROS coup de coeur. I'll be back FOR SURE. No doubt in ma mind.