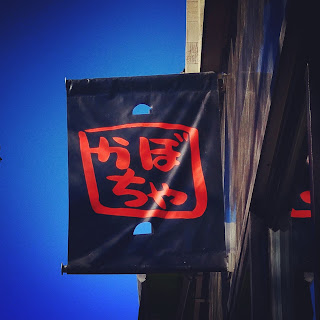 Another day, another lunch date with my Asian persuasion dude, Jer! He suggested Isakaya Kabocha on St-Laurent, where he'd been before during a street fair and hadn't been too impressed with their kimchi poutine. And THIS is why he decided I should go. Hahaha! I AM always in for a challenge and to try new places even if there's a possibility of sucking because I get to write a review. Let's face it, I'm a review whore. 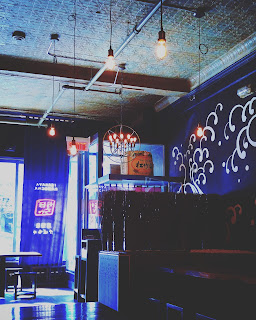 The place itself is very dark. A bit too dark, I found. The walls are black with very thin white drawings, and the tables were dark as well. Little wooden stools, a long counter with the kitchen behind it and high ceilings. And there you have it ladies and gentlemen: the restaurant! As soon as I entered, a smell entered my nose. You know, the very strong cleaning product they use to clean murder scenes? THAT one.
I had looked at the menu but was waiting for Jer to tell me what to have. When he said 'whatever you want', I began to get worried AND a bit mad. I then informed him that he is responsible for the dishes I order when I'm Asian-ing with him. In the end, he conceded. 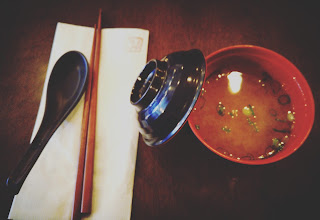 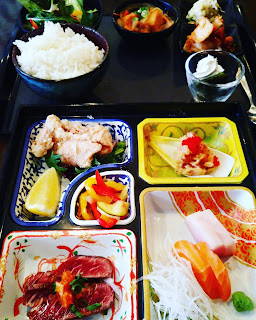 Let's start with the sashimi. Oh, how I love fresh raw fish in ma mouth! It was like candy. And it melted... IN ma mouth. The beef carpaccio was on par with a lovely and very tasty ponzu based sauce with a bit of horse radish to kick it up a notch. It wasn't tough at all and again, just disappeared into my taste buds. The fish that was on the endive leaf (apparently it was salmon, but Jer and I want to say otherwise) with what seemed like rice krispies (hey, I don't judge) was really effin good. But the crunch was not so crunchy because it was moist. DAMN that word! The karaage's batter was a tad on the thick side and didn't taste as much as I'd wanted. I like it when there are spices in there. This was spice-LESS. I liked the texture though. The kimchi: what I would like to say about this kimchi is that it is not kimchi. NOT KIMCHI. As I just mentioned, I don't judge :p And by that, I mean I am the judger of all judgers. It tasted nothing like kimchi, was way too sweet and it was too liquidy. It just wasn't right.

The potato salad was dry but I did like the tanginess. You know, when it gets you at the back of your cheeks? Ya. I'm not even going to mention the mesclun. As soon as it got to the table, Jer bear looked at me as if to say 'shiiiiit, she won't be happy'. And I wasn't. Please stop the mesclun. Just stop it. The salmon cubes that were deep fried were, again, too dry. I ain't a fan of dry food. It tasted like it had been marinated in too much acid, also. Not uber pleasant. The dessert WAS pleasant! It was this very dense green tea cake with just enough whipped cream on top. Not overly sweet and actually quite nice! Save for dessert, food in the first box was better.

Service was good. Very good water service throughout (you know that on a scale of 1 to 8000, it is THE most important thing in my book) and was very present. Even so, he never actually asked us if we liked what we were eating :/ -8000 for YOU! We still got our food in record time. Would not expect anything less from an Asian establishment!

Do you know how many isakayas there are in Montreal? Ya, me neither. But I do know that I must visit ALL of them!