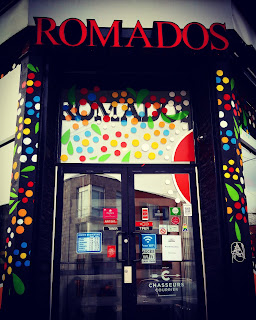 Last time I visited Romados, it was before the fire of 2013. I lived on the plateau at that time(ah, the good old days!), only a couple blocks away. I'd go there all like a floating cartoon following a smell. Mmmm!
So, when my cousin Gen and I decided to go out together for lunch, I totes suggested Romados! Why? Well, I wanted to see the new digs. But most of all, I wanted that awesome chicken back where it belongs; my mouth. 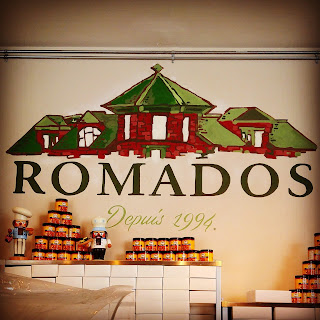 Romados is this magical place that sells Portugal. Seriously. That piri-piri, that chicken, those pasteis de nata!!! Basically, there are about 25 seats, a counter for the pastries and other loveliness and a counter for le chicken. 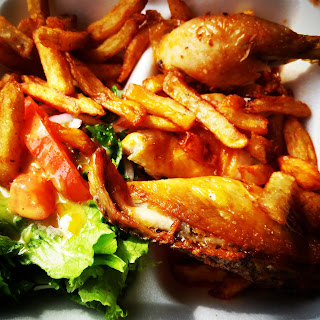 The chicken. With salad and fries. I said yes to some extra spice in the piri piri (I mean, who doesn't like spicy?) and had the quarter leg. Okay, let's start with the salad. Okay, we're done talking about the salad. The fries were perfect. Who says you need ketchup? They were hot as f*ck, really well seasoned, crunchy on the outside and soft on the inside. Le chicken. Ah, le chicken! It was juicy, it had crunchy skin, it had awesome piri-piri sauce on it, it just fell off the damn bone. Basically, chicken heaven! 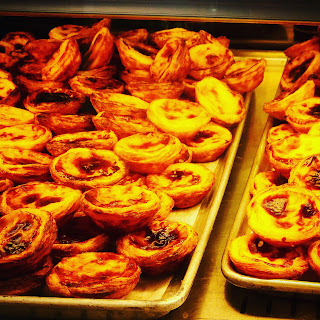 Pasteis de nata. Hello. Hello you! When I went to Portugal, I couldn't get enough of these (and gained 5 pounds probably). These were just as lovely. Custard-y goodness. Mmmm. Soft, flaky, everything you should have in a pasteis!

Service was good. Everyone smiled, everyone was happy. It's nice to go somewhere where people are happy. I guess selling 300 to SIX HUNDRED (yes, this is a fact) chickens a day makes you happy as can be! It was counter service but still worth mentioning!

There's no doubt in my mind that I'll be going back.