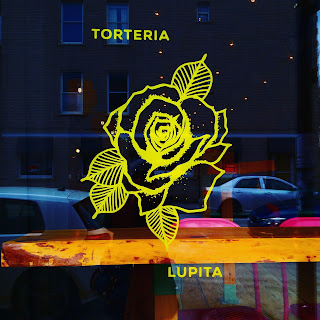 This, along with at least 50 other restaurants made the list on my computer: places I MUST eat at. Not being open for dinner/Sunday/Monday really made it difficult for me to get my Lupita fix. Well, I finally got a chance to go there for lunch this week with my step mom! YES!

Story is that Olive + Gourmando's ex manager opened this with her mom last year. Well, I'm sure as hell glad they did! 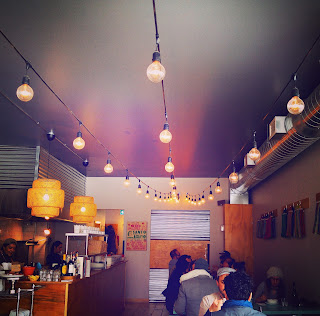 The place itself is very colourful, with picnic tables and lots of counter space. It seems like just the right place to have a family gathering. Spanish music was playing and the ambiance was great! The mom (I can only presume), came to welcome us, show us to our seats, and gave us menus. She had this big smile on her face that could only mean how happy she was to work there. I love being greeted with a smile. Much better than someone that does not want to be at work that day.

They are famous for their tortas but the woman convinced us to have the soup as well. It was -8000 degrees outside, see. 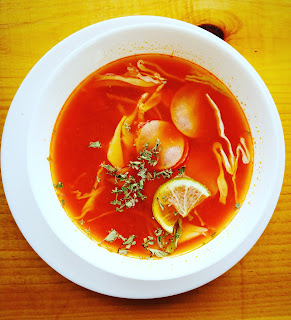 La soupe. It looked so tasty! And it was! Mexican corn (kind of like a chick pea but not), lime, chicken, radish, spicy but not too much. There was also some crispy cabbage in there. It was just what we needed. All the flavours went well together and as Jo put it, 'I never think about radishes in a soup, but it works'. There were some dried herbs which I could have done without. 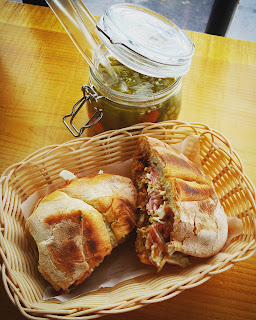 The torta. More specifically, the Cochinita! Braised Mayan pork, mayo à la habanero, marinated onions, frijoles and cabbage. Let's stop for a moment and talk about the bread all of this goodness was in. Oh. My. God. Holy sh*t. What the f*ck!!! Pretty much the best bread I've ever had in ma mouth. And I'm serious. And Jo thought the same thing. We both said at some point that we were full but kept on eating because the bread was way too good to pass up. This wheat bread was like a soft cloud. The pork, although a tad dry, was packed with flavour. The cabbage was awesome in there and added some crunch and the marinated veggies were there to add some vinegar and a little tang to it all. The frijoles were also just so lovely and yummy!!! Everything married well. Argh, I want another one right NOW! That mayo was just spicy enough without being overwhelming. All in all, a WOW sandwich.

Service was great and very familiar. Water service was good and there was always a smile on that woman's face! The only thing that lacked was the fact that she never checked if we liked it or not. Or maybe she just KNEW we would like it! HAHAHA!

Do I even NEED to say I'll be back?