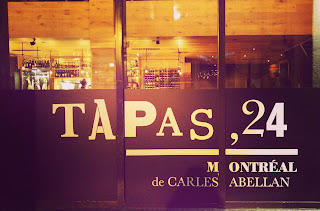 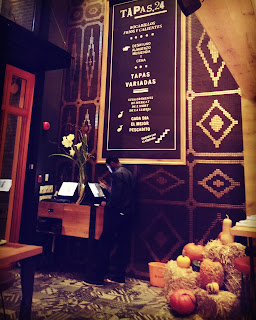 Tapas 24 is a restaurant with high ceilings, lots of wood, and a huge and thick AND expensive looking marble bar. It has an open kitchen on the first floor and I've been told there's another one upstairs (hey, I'll have to see it to believe it!). The owner used to be Sébastien Benoît, the Québécois comedian and he has sold it to an actual manager. Who is very present. And, I gotta say, looks a bit scary. I'm sure Shar would disagree because she is always there, gettin' free shtuff, so he can't be that bad!

I had already been with Shar and a couple friends but hadn't written a review, which is SO unlike me! This time, I was gonna get it, get it good! 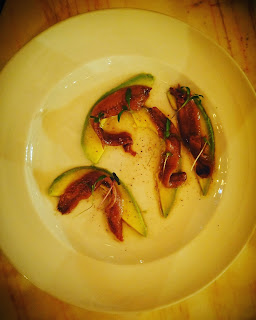 Anchovies atop avocado with some xeres vinegar and coriander sprouts. I really loved the xeres in there and the avocado was just perfect. The anchovies were really tasty but a tad too salty for my taste. I was still surprised that I loved this dish so much because I'm not usually a big fan of the anchovy persuasion. 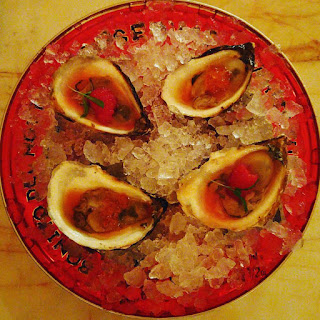 Oysters. Ah, oysters: a love story. I used to just not want to ever taste those bad boys and now I can't get enough! These are the freshest damn oysters I've ever had. And I've had oysters. That's right. Two had leche de tigre (lemon, fish stock, chilis...) and raspberry, which sounded weird but tasted awesome and sweet. The other two had kombu, ponzu and fish eggs on top. Wow, dem cooks know how to find a winning tasty combo! I couldn't even tell you which one I preferred. 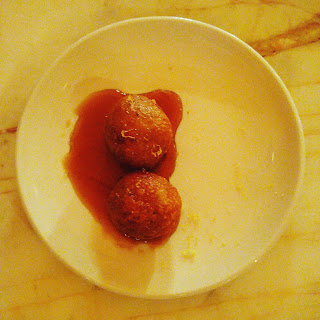 Bacalao croquette or cod croquette. All I's gotta say about this is damn girl! Like, fo realz. With that maple syrup sauce? Holy effin Heysus! Ya, that good. They were moist and tender and not dry like some croquettes tend to be. That sauce added the finishing touch to one of the best bites of the night. 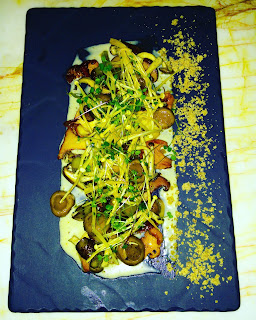 A bad picture. Uh, I mean, the shroom plate. Button mushroom, enoki and oyster mushroom with a pine nut emulsion and chestnut crumble. The button mushroom were perfection (you never hear that when referring to those mushrooms) and were engorged with flavour. The enoki were cooked just right, for a second or two. Those bad boys are easy to overcook because they are so tiny. The oyster mushrooms were somethin' else. WOW! It was like eating a very expensive piece of meat. Fo serious, guys! I do NOT kid when it comes to food. The sauce was nice and you could actually taste the pine nuts in there but there was a bit too much of a good thing. The crumble added a nice texture to it all and married well with all the shroomy flavors! 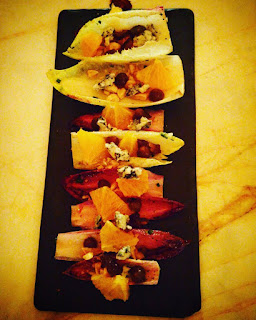 Endives with oranges, dates, blue cheese, almonds. This was new on the menu and I'm damn happy about it! The endives could not have been more fresh! The falvours were a match made in heaven even if at first glance, I was like whaaaa? I also noticed the blue cheese which I am NOT a fan of. Normally. This time, it was just so great in there and not as strong, which helped the liking. The nuts added a crunch and the dates added a certain sweet side to counter the blue cheese's salty side! It was just on the ball. 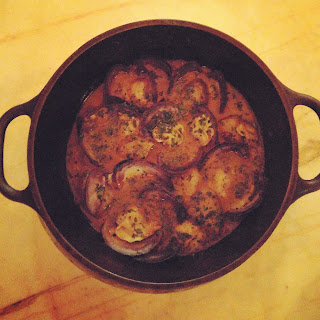 Clams with artichokes, dry xeres wine and Spanish ham. The artichokes were right on. No canned artichokes here. Just the real stuff, which, by the by, is great. Do you even know how long it takes to cut an artichoke to get to the heart? And also, there's the annoyance level. Hahaha. Can you tell I hated doing this while at ITHQ? The clams were very tasty and had absorbed all that yummy hammy (haha) juice. Haaaaaam juice. The ham was a tad salty and the whole dish bordered on over salty but did not reach it. It was close though. It. Was. Close. 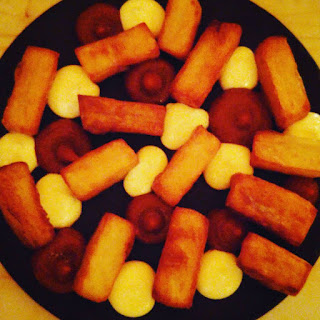 Patatas bravas with aioli and salsa brava. This was a bit too much. A tad unnecessary. Shar's bf's 'excuse' for bringing us this was that we needed something to soak up that awesome clam juice. Damn it, he was right. The potatoes were actually crispy on the outside, soft on the inside and moist: just how you would describe THE perfect fries. The salsa brava had a nice smoky aspect to it and the aioli was very tasty. We didn't finish this: there was more to eat! 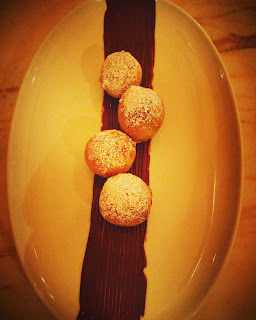 Chocolate fritters. Oh. My. Effin. Double-effin. God. 70% dark chocolate. This was my kind of dessert! I don't even think I need to explain how good this was. But seriously, these little balls were full of melting hot chocolate. Aaaaaand scene! 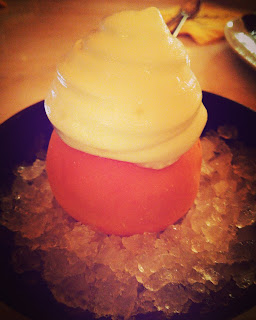 El pomelo. Another new item on the menu. This was multi-layered. Mmmkay, so you have the grapefruit, right? And then, you have a pistachio parfait. And THEN, you have pieces of grapefruit. And to finish it off, you have whipped cream flavoured with camomile. Wow. I am not usually a fan of fruity desserts and this just made my day! Pistachio parfait was just perfect and actually was a perfect match with the grapefruit. Who would have thought? And don't get me started on that whipped cream. The camomile was subtle, just as it should be. Lemme just say it's a good thing this is on their new menu! Lemme also tell you that I was one of the first ones to try it. This is when I stick out my tongue :p

Service was just wonderful. We were seated at the bar so we had Sara's full attention. That's right, I got her name. We're going out next week. Damn it, I lied, we're not. She served us wine all evening (all 4 glasses---each!) and as soon as we were done a dish, she would take it away. We also had the maitre d' bring us new plates/utensils in a very timely fashion and our glasses of water were always full. Shar's bf came out whenever we got a new dish to check up on us. Well, AND to give her a kiss but that was just sweet :)

I have a feeling I'll be going back. And I will be the last one to complain!