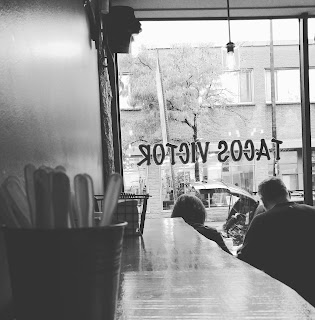 Tacos are all the rage in St-Henri/Petite Bourgogne right now. Basically the whole south-west of Monteal is Mexicanising itself. And what do you need most when you go for tacos? A Mexican!!! Lucky for me, I know a good one :) 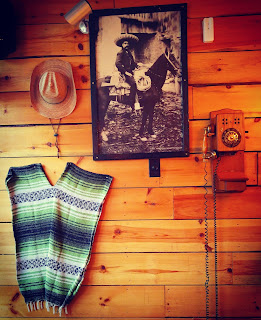 Gus and I headed to Tacos Victor on a very rainy Saturday. Ugh, you know, one of those days. The place is small with about 15 seats. It's all wood: walls, tables, ceiling! You get the Mexican vibe with the deco in there and it does give out a nice warmth, especially when it was so crappy outside. There was a tiny piñata in the window that was just screaming for customers to come in and have some good fun. 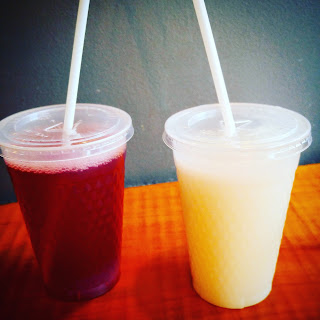 Jamaica water made with hibiscus and Horchata water made with rice. I felt like both could have been colder. The rice one was too thick for me although it was really good with hints of cinnamon. The hibiscus juice was special (I don't drink that every day!) and not overly sweet but not really my cup-o-tea. 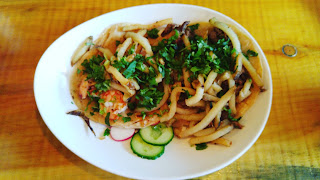 Shrimp taco and flank steak taco were my two choices. Gustavo quickly informed me that in Mexico, they almost never serve tacos con camarones (shrimp) because it is too expensive and tacos should be made with stuff that dson't cost much. I like how they think.

The shrimp were perfectly grilled and had absorbed some great flavours. The tortillas (there were 3!) were on the soggy side  and not even that awesome coriander could save the dish. It was good but not super, you know?

The flank steak one had the same tortilla problem. The meat itself was on the dry side (booooo!) The onions were awesome in there, adding a tangy side.

And now, the potatoes. Why? Why put more carbs on top of carbs I ask? You should have seen Gus' face when they brought us our tacos! I mean, they were OK, but not the best and wtf were they doing in there. I wonder. Someone, please, gimme an answer. 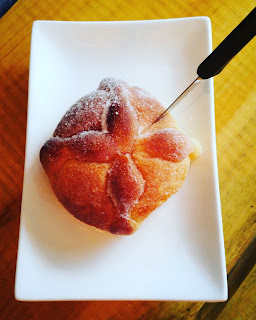 They brought us pan de muerto to celebrate dia de los muertos. It looked great! The four lines were meant to be bones. Uh, awesome! You could actually SEE the sugar on that baby! Hahaha! It was very good and a lovely dessert! We obviously didn't eat all of it but it was very considerate of them to give us that dish! Actually, I then read that their first 50 customers on that day would get one for free!!! Ya boy!

Service was, for a lack of a better word, smily! She was such a cutie pie and frowned big time when Gus, in his severe voice, told her in Spanish that it was not that good. Poor little one!

So many taco places, so little time! I'll try another one next time :)

As a Mexican I love seeing people showing interest of sharing samples of our food to the world, but they should stay true to the origins and not over do it, else you are eating something else that is not a taco, but a bunch of stuff on a tortilla kudos for the amount of meat they add, but quantity does not mean quality.,

I'm with you on that!

Tacos are not just meat and a tortilla, there are hundreds of different ways to prepare a taco and each region has their specialities. A taco is what you say, a bunch of stuff on a tortilla, fyi some places in the state of Mexico called tianguis sell the tacos with fries on them.

Good to know! Thanks!