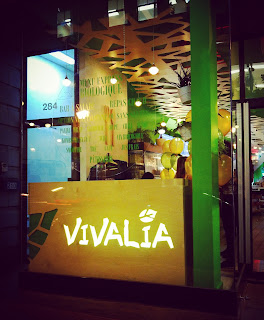 I was invited to one of the openings of Vivalia. I was sick as a dsawg with gastro (ugh, memories) but I brought my gurl Al to help me with the eating (or lack there of) and judging.


Vivalia is a cute little restaurant in Old Montreal. And I do mean little: if I stretched out my arms far enough, they would be as large as the restaurant itself. TOTES not exaggerating. Believe me you. It was crowded in there and at some point I felt like I was prisoner of the wall, but apart from that moment, it was nice. I felt a bit like I was hanging out in a garden. I like gardens. I like em' a lot. 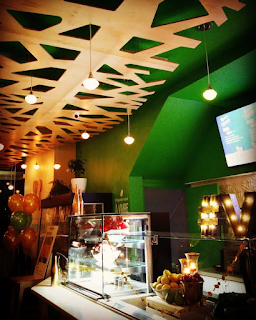 The ambiance was  happenin', with some jazzy, loungy music playing and people gathering around high tables. The concept of Vivalia is that they serve up 100% organic food (gooooodies!!) in a kind of buffet style, so that you can choose what you want from what's in front of you.

As soon as we arrived, someone took our jackets. I liked it already. We were told to choose whatever we wanted to drink: bubbly, white or red wine OR between a couple different flavours of kombucha. Yay! I had tasted kombucha before and loved it and y'all know I'm a sucker for fizzy beverages. Plus, the fermentation was bound to make my stomach a bit happier.

Sometimes, when I get invited to these things and I get there right on time (as everyone should, pfff), I wait and I wait AND I wait for food. I am not a very patient person. This time, we got our drinks, we walked over to a free table against the wall and a couple minutes later, a dude came out with food. Yes. Food! And by that, I mean, 'yes, food that I will barely taste because I'm uber sick'. 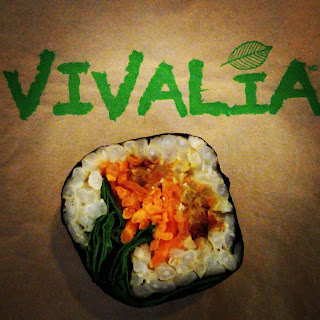 Sushi! Since I've stopped working at Sushi Taxi, I haven't had sushi, like, at all. T'is sad. So I was pretty happy when sushi started arriving. They had a couple different kinds including a california roll, a salmon roll and a vegepaté roll! Let's face it, I'm kind of a sushi expert and these did not feel or tasted like real sushi. But A for effort! The rice was undercooked and the pieces were falling apart. BUT the taste was still there. The california roll was apparently the favorite but I preferred the vegepaté! I mean, when do you get végépaté in a sushi? Never! It was quite lovely! I've had végépaté, I've made végépaté, I've bought different kinds... one could even say I'm somewhat of an expert. Yes, it was a tad whhheird to have it in sushi, but quite original! It was moist, yeast-y and home made goodness. Just the way good VP should be. 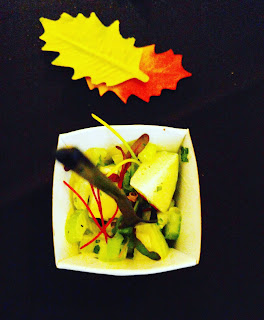 Celery and apple salad. I gotta hand it to them, they had cute little vessels. I mean, how cuuuute is that??? But celery and apple? Meh. I'm sorry. I'm a firm believer in 'if I can make it at home, I won't eat it in a restaurant'. And could have definitely made this at home. It was good, but there was too much vinaigrette and it was missing seasoning. 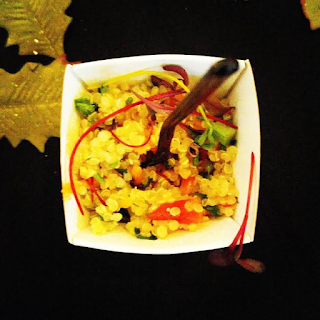 Quinoa salad. Same concept here. Some veggies and some quinoa. Again, it kind of lacked flavor. AND a wow factor. 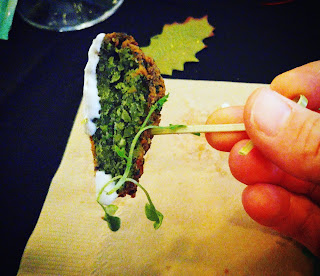 Falafel! I loves me some falafel! Awesome mix of flavors and very herbal! Which, by the by, I love! The mayo was vegan! Hey, you can make mayo without eggs, I give you 28$! Why? Who the hell knows, but I feel like it. It was very nice and my stomach actually appreciated this. This was a favourite. Al and I wanted more of this. Like, a LOT more. Basically, this was goat cheese and.... yep... goat cheese :) It was quite strong for goat cheese but it was good and soft and goaty? Hahaha, you know what I mean! It had much pepper in there which made it taste awesome! There was a little cracker under but, really, who gives a sh*t about the tiny cracker when the goat cheese is so good? 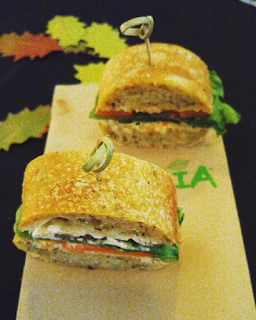 Saaaaandwicheeeees!!! With home-made bread, no less!!! The salmon one was uber tasty with some cream cheese and some greens! The home-made bread made it even better. Yes, it was quite simple, but it was simple made awesome, you know? The chicken sandwich was as good. The chicken was moist and the tomato fit right in there. Surprisingly, the tomato did not make the bread soggy. I will have to email them to see how this phenomenon did not occur. 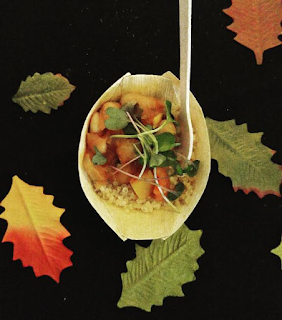 The wannabe tajine. Ha, my friend Val exploded with a 'whaaaaaat?' when she saw that I posted this as a 'tajine'. Hey, she's married to a Moroccan. I was a bit bummed to see more quinoa here, instead of the usual couscous. Apart from the fact that it wasn't a real tajine, per se, that little tiny dish tasted really good: the chickpeas were  nice and spiced up and actually felt like I was eating a somewhat-real tajine. Well, except for the quinoa. I would have preferred some couscous, of course.

Sooooo, there were a couple other dishes buuuuut I totes forgot to take pics. I was sick, ok? I wasn't really there :/

Service was great throughout the evening! There were a couple of uber friendly people passing around food and emptying our tables and what not! They were also moving around with bottles, which, let's face it, is very important when it comes to openings! Hahaha!!!

I'll be going back fo shizzle! Especially now, that I can actually eat and taste the good stuff!