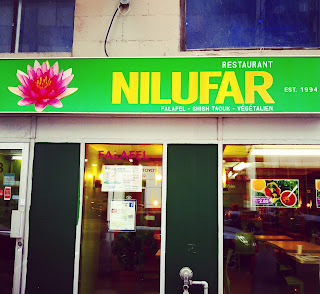 I had been wanting (really, really badly) to eat Lebanese food recently. Sometimes, you just gotta have a good shish taouk with some garlic potatoes. You just gotta. So I went, and I got. Yesterday was Nilufar with Gus.

As soon as I entered, I sorta knew I was going to be disappointed. Iz kinda sad to say, huh? I had read really good reviews and then I enter, and it smells funny and it's a bit dingy and it dson't look very clean. Not uber fond of dirty restaurants, you know? 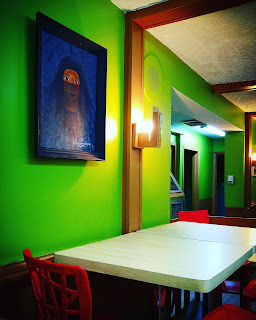 Some wobbling fake wood-plastic tables with some red and some green plastic chairs and dirty walls. I sound rough n' tough, but it's only because...well, I am. And if I'M not, who's gonna be, right? That's what I thought.

I think the poor guy was alone, doing the cash AND the kitchen, going back and forth. Argh. I went to order and looked at the poor little salad bowls that were on display, and they looked about 3 weeks old. I was very worried that he was going to serve this to people until I found out that he only has them on display so we can choose the salad but he has the real stuff in the kitchen. Kinda weird and not that good of an idea, if you ask me. OH, and if you'd ask the MAPAQ, they would also think the same thing. 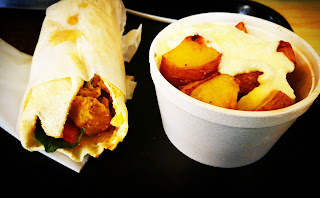 Anyhoot, I ordered my usual Lebanese lunch: shish taouk and garlic potatoes, heavy on the garlic. My goal, when I eat them potatoes is to not be able to kiss anyone for at least 48 hours. I am SO lucky to be single :p

Those potatoes were lovely. Really, on the potato ball. They had the skin on which made the dish even tastier than usual. They were crunchy and soft and moist and were very happy to be in ma mouth (or vice versa). The garlic was uber garlicky. I'm afraid to say a bit TOO garlicky. It was as if they had made the sauce from uncooked garlic. Seriously, my tongue was itchy for like an hour after!

Service was at the counter but the dude was very nice. Most likely the owner.

All in all, it was disappointing. Next time I want to eat Lebanese food, I'm heading somewhere else.