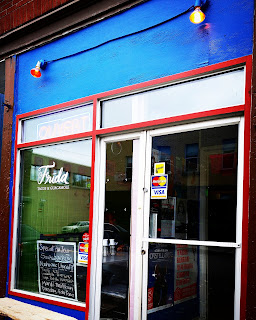 I brought my Mexican, Gus, to yet another taco place last week. Whaaaaat? I like me some tacos! This time, it was Tacos Victor's neighbour, Café Frida. Yep, apparently, los tacos y los burritos stick together, with about 4 restos that serve up Mexican goodness in a two block radius. 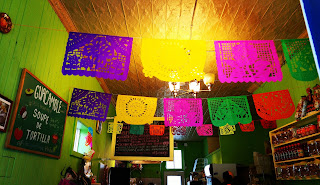 This place is even tinier than the other one! To get to our table, we literally (and I do mean 'literally') had to hop over a couple sitting at the table next to ours! It was kind of awkward and I really hoped that I wouldn't need to go to the restroom during lunch! 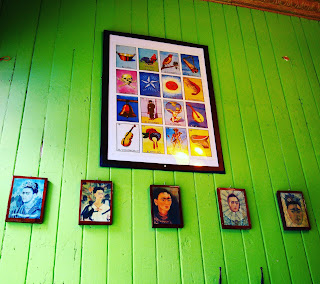 It was such a cute, tiny restaurant! Very colourful! And by that, I mean EVERYTHING was colourful! The walls, the boards, the lovely garlands! It felt so warm, when it was so cold outside. Like a hot cup of cocoa! Ah, warmth. And Frida was everywhere. Seriously, I've never had so many unibrows look at me at the same time. To complete the ambiance, there was some nice Spanish music (I don't think we can say that the whole playlist was composed of Mexican music, so I'm going with Spanish!) playing. I loves me some good Spanish music, I tells ya! I absolutely HATE going to a restaurant where they decide to play the top 20 hits. Ugh. 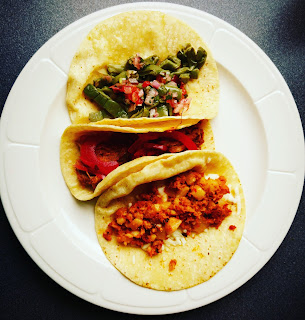 Tacoooooos! Nopales, cochinita and chorizo! It was my first time trying nopales! Cactus! Whaaaaat! I mean, who can say they ate cactus? Except Mexicans. And perhaps South Americans? Oh, and of course, them desert dwellers. OK, so everyone has eaten cactus except for me! Damn it, I'm always the last one! Anyway, I HAD to have it. First off, I gots to say that the tortilla was perfect. JUST perfect. It was crispy yet still tender. The taco was quite tasty, a bit like I was eating a plant. Oh wait... :) I loved the onions in there that added a nice crunch. I gotta say that the cactus itself wasn't my fave. Shiz, I really wanted to like it. It just didn't talk to me, you know? I like it when cacti speak to me. Aaaand I've officially gone cray cray.

Moving on. Cochinita. Marinated pork with red onions. Pork? Yes. Marinated onions? Ya giiiirl! The pork was uber moist and just melted in my mouth. Mmmmm... melting meat. The onions were delightfully tangy and just fit so well with the pork. Let's face it, when do onions NOT fit? WHEN? Signed: biggest onion fan in the WORLD.

Last but not least, chorizo! Home made, of course! It was spicy and not dry at all (see how much I DON'T want to go overboard with the word 'moist'--which, for you newbies, I HATE!!!) It was very cheesy which is always yummy! Well, my lactose-intolerant stomach would say otherwise but let's ignore that for now. Gus was telling me how, in Mexico, only the cheap vendors would put potatoes in there to fill it up so that they don't have to use as much meat. AH-HAAAAAA!!! Gotcha!!! But seriously, there weren't that many so I definitely did not feel cheated but I also did not necessarily want the extra carbs. 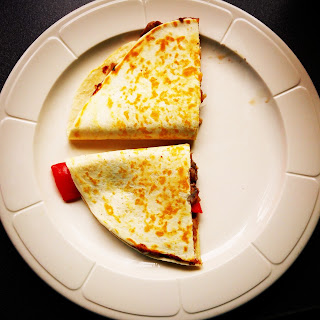 Why not continue eating Mexican goodness? Quesadillaaaas! Ya baby! We had mushrooms sautéed with red onions, red peppers and frijoles. Gus looked really weirded out that there were frijoles (beans) in his quesadilla but did mention that he really liked it. But apparently, they're not supposed to put it in there. BUT it was really good. Dilemmas, dilemmas. It was cheesy goodness, that's what it was! We ate those two pieces in about 5 seconds, tops. That tortilla, again, was right on and the frijoles were perfect in there. They had the right consistency to kind of take up room without taking up too much, you know? You know? The peppers added some sweetness and the mushrooms were wonderful. Hey, simple CAN mean good. A bit o' lime on there and BAM! Awesomeness on a plate! 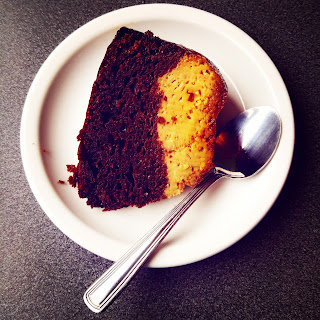 Pastel impossible. Whaaaaaat. The. F. Half flan, half chocolate cake, merged together. Again... WHAAAAT? How. Did. They. Do. Dis. It was sweet but not too sweet and as someone that is not the biggest flan fan (I mean, who is), it was the perfect dessert. Apparently it's a traditional dessert. Lucky them. Pffff. I wish WE had a cool dessert like this to call 'traditional'. I would just love to know HOW they stick em' together. Ah, the mysteries of life! I actually had never seen this before. Café Frida is now officially THE Mexican connection in MTL. Done.

Service was great. The waitress was all smiles and such a cutie. She spoke to Gus very quickly in Spanish while I tried to understand. Slowing down would have helped. Geez. I would have liked more water at some point but in her defense, we were very hard to get to! I even had to reach out and take plates from her hands because we were in such an awkward area!

Totes going back. Regresare por mas! You know, it was starting to look like a quest to find the best taco in town, but it's done. Iz over. Café Frida wins :)