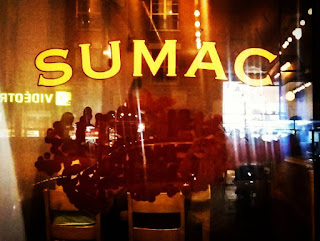 I LOVE Sumac. Simple as that. It's love. And I met some pretty awesome girls that love it as much as I do. What what. It's Lebanese at its best. Forget Amir or Boustan, Sumac is where it's at. So that's where I was last week with Al and Mar, the Sumac 'experts' and V, one of my fave baby gurls from the gym.

First off, lemme say that Sumac is effin busy. All the time. ALL the time. All the TIME! Y'all get it? Obviously, there's a good reason for that! You want the best Lebanese fast-ish food, you go there, it's as simple as that. On top of being busy, it's happenin'! It was full when we got there at 8h30 pm and got even more full after that! 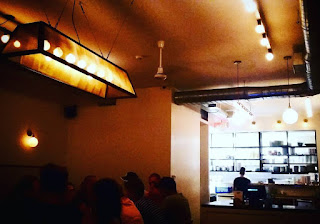 Happenin' usually means loud, and it certainly did in this case. Which is just fine, but when the table is as large as I am long, and you have a hard time hearing the person in front of you, it becomes a problem. A problem I would absolutely accept if I were in a night club. But this was not a night club. At least not that I'm aware of.

I've already written about Sumac so I won't dwell on the place itself (you can read about it here: http://www.eatingoutmontreal.com/2015/02/sumac.html ) but more on the food because let's be honest, this is the #1 reason why you are reading this. 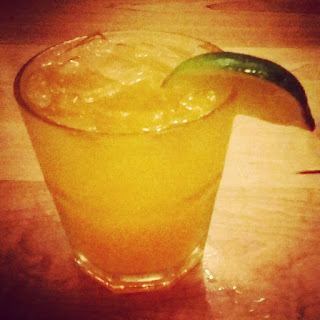 I wanted to have a drink. Rum and fanta sounded like just the thang I wanted. Simple and right up my alley. You know, my drinking alley. It had just the right amount of rum in there (read: LOTS) and was nice and sweet. AND, when do I ever get to drink Fanta? I LOVE that stuff. 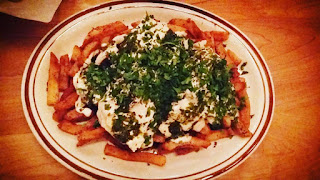 Hummus fries. So basically two of my favourite things. It should be part of that song in The Sound of Music-- 'some hummus on fries with lo-ooots of spices, these are a few of my favourite things!'. Yes? Let's do it! I'll call up the Von Trapp family. But before I do that...I would like to rename this dish 'The Lebanese Poutine'. I don't really like poutine and will only taste one that does not include either the crottes de fromages (ew!) or that brown sauce (eeeeew!), so this was purrrrrfect! The fries were crunchy and hot and soft on the inside. Basically, the definition of a good fry. On the fries, the spices were very present, which is what you want! Well, it's what I want! Aight so there's sumac (I bet at least 62% of you did not know that it was a spice), which adds a bit of acidity, and zaatar which is a mix of spices like thyme, sumac and sesame seeds. I remember when I was in high school, dem Arab boys would always bring pita type bread (from what I recall, it is called manouché---but I might be wrong) smothered in zataar. The spiciness came from the s'rug which was kind of sprinkled on so we never knew which bite was going to be spicy. For me, it was a nice surprise but for Mar, who dsont like the spice, it was not cool. The hummus was like a cloud: smooth and heavenly. some of the best I've had. And trust me, I've HAD hummus! 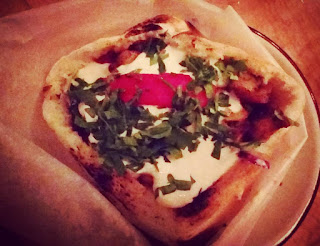 Chicken shawarma OR very full and colourful vagina. No? Come oooon! In this loveliness, there's hummus, tahina, purple and green cabbage and pickled turnip. Yes. What I noticed at first was that the chicken seemed a bit old. I guess they had cooked it earlier and hey, there were closing soon soooo. Still, obviously, the fresher the better (duh), so that kind of turned me off. It was still uber tasty tho but... the question remained: when in the hell did they cook it? The bread was very soft and fresh but maybe a bit too thin in some spots because all the liquid from the sandwich would seep through. If there's one thing i hate is having hands full of food juice. Hahaha: food juice. The turnips were perfect and I just loved the cabbage in there. Really loved the textural aspect of it. Crunch crunch crunch!

Service was aight: very quick, water on the table, but does not check if we're a-ok. How it goes is that you order at the cash (those big line-ups can get annoying) and then you are seated and wait a couple minutes for your plate. It's actually rather light-speed fast.

I can't not go back because I usually love it so much so ya, totes heading there again soon for more Lebanese awesomeness that will hopefully be a bit awesomer (don't even check, it's a word!) than the last time.