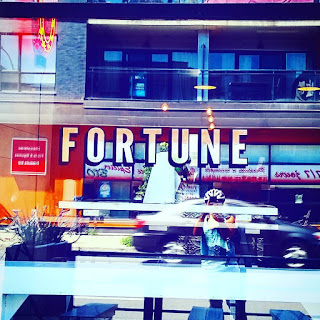 I went to Fortune for the first time last year for a 'work meeting' with Val and Shar. We discovered their margaritas and then we discovered more of their margaritas. OK, let's just say tipsiness was reached... before work :) Hey, it's the best way to start a shift. OK, perhaps not. But it sure made it fun. 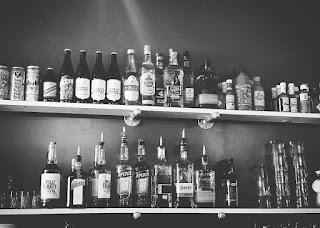 Quickly, because I've already described the place in my previous post: it is really small and you should definitely sit at the bar to have a good view of the tequila. You know, at some point in high school, my nickname was 'no more tequila for Marie'. I shant explain for I think it's pretty clear! My super duper friend Jad wanted me to try their shrimp n' grits and who am I to refuse good food? Come on, I'm a restaurant blogger, it's my job to try what y'all like. Fo serious! 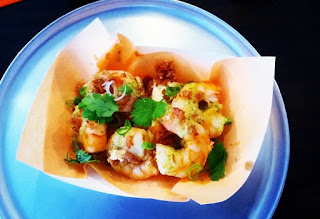 Hello! AND hello again! I'm probably the biggest shrimp fan I know. I'm like Bubba in Forrest Gump: I like shrimp cocktail, shrimp curry, coconut shrimp, shrimp in a stew, shrimp in a salad, pineapple shrimp, lemon shrimp, shrimp everything. And when I took my first bite of this dish, my eyes actually lit up. Holy f*ck! Those shrimp were cooked to damn perfection. Shrimp are a bit like calamari; cook em' a second too long and they become plastic. And that ain't no fun. They pretty much melted right in ma mouth. Melting shrimp, that's what I love. FYI, grits are coarsely ground corn kernels boiled with water or milk. Ps, that was for you AND for me, cause I don't think I had ever had grits before in my long life. It kind of resembles the texture of polenta. These grits had cheddar in them and the dish was accompanied by roasted jalapeno, tomatillo sauce and chicharron. By the by, this was only 7 bucks. Aight, so the chicharron brought a lot of taste to the dish but some of that nice pork rind was a tad too hard for my teeth (read: rock hard). So that kinda sucked for me; it was like putting small pellets in my mouth. Jad LOVED them tho. The jalapeno was just awesome in there and brought in some nice heat. The tomatillo sauce, i would have liked to have more. But you can't have everything, can ya? Coriander obviously fit right in there. For me, coriander would even fit in with ice cream. Cereal. Cake. I. Just. Love. It.

Back to dem grits. Those grits were like magic, man. You lookin' for magic grits (as Vinny described them in one of my all time fave movies, My Cousin Vinny)? They reside at Fortune. They were soft, they were pillowy (is that a thing? it is now!), they were cheesy and lovely and smooth. I want to say they were the best grits I've ever had but I really believe that I've had grits just this one time. But oh God were they ever good. You got it, right? GOOOOOD! 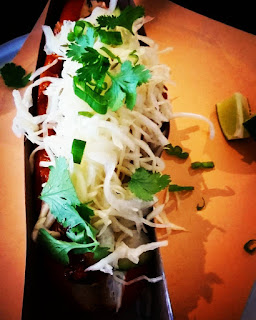 The pork guédille. Carrots, radish and cucumber. And a little cabbage on top. This looked great! You're sensing the tone, aren't you? Mmmmya, for me, it didn't turn out as good as it looked. The cucumber was awesome and marinated. I just love that briny taste. The bread was crunchy and very guédille like. Hahaha, suuuure! The pork, in my opinion, was a bit on the dry side so that was kind of a turn off for me. The thing that ruined it tho was that it wasn't radish per se, it was dikon in there. I usually like dikon in dishes but here, it had an overpowering taste that just didn't fit in. Obviously, the lime and coriander made shizzle better, but just couldn't save the day.


Service was good, with a no muss, no fuss kinda way of doing things. We got there when there was no one (it quickly filled up), so we got to order and get or dishes within 15 minutes. There was one girl in the kitchen and one girl serving. That's what we call 'knowing how to manage a restaurant'. I didn't find our waitress particularly great, and it seemed to be hard for her to crack a smile. But she did ask us if we were happy with our choices and so that gives her a good 5 points!

Food: an overall of 8. But we gave 11 gazillion for the grits plate
Service: 8

I went back, didn't I? I would totes go a third time for dem shrimp n' grits!