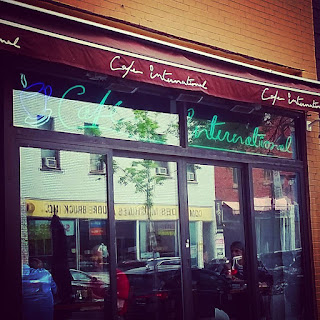 I was invited once more to go to Café International! This time, it was to try their breakfast. They are new in the breakfast area (you know, THAT area!) and wanted my opinion. So, I brought my Bridgert, who, by the by, has been to two failed invitations because of bad food. She's one lucky girl, because this was [not] third time's a charm. 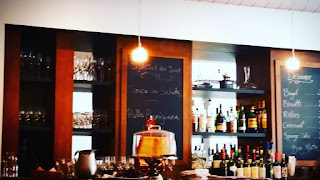 You can read all about Café International's decor and shizzle here: http://www.eatingoutmontreal.com/2016/06/cafe-international.html. There was 'jazzy' music; you know, the kind that plays in malls. Where only old people go to. That are about to dsie. But seriously. I would prefer some fancy Italian singer in my ears than that!

I feel like it's my duty (and Bridgert would certainly agree) to mention the 800 errors on their breakfast menu. A couple mistakes is a-ok but more than a handful is just pushing it! Many accents were forgotten, syntax was all wrong and even some letters were omitted (its gruyère, not guyère---written like that every time).  It was pale blue with little drawings here and there of a sun OR a piece of bacon OR an egg. Come on. COME. ON.

I hate bashing restaurants, especially the ones that invite me to eat fo FREE. I appreciate it, I really diddely dso! But I's got a job to do people, and that is to give my honest opinion about restaurants. And when the menu has shtuff like '2 eggs and bacon or sausage' or 'pain doré' or a fruit bowl or a damn bagel with damn smoked salmon on it, I get a little mad inside. Or a LOT mad, like the hulk. For a moment, I just wanted to leave, but I just couldn't bring myself to do it.

To make matters worse, I was told that the chef was to cook for us and surprise surprise, he wasn't even there when I arrived and did not for a good 30 minutes. Fun. He was awesome last time I went and he's a really super duper nice guy (you get it!) but gosh darn it boy, show up on time when someone is coming to see you!

The waitress suggested we have three dishes from the menu to share and I just felt like telling her we did not know what to pick because it all looked way too simple/bad/been there done that. I'm not even being mean, I'm being realistic here, people! 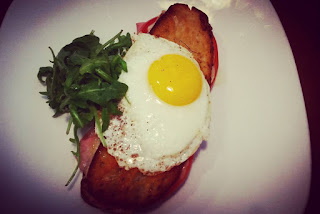 Le croque madame. The only difference between this and the croque monsieur was that there was an egg.The egg was absolutely perfect and as y'all know, I'm egg-difficult. AND it was perfectly seasoned. 8 points! The ham was nice and on the thicker side of dem cold cuts, the tomato gave it some moisture, although the piece of bread on the bottom got a bit soggy. The bread was nicely grilled but there was something missing, like some pepper perhaps. Oh, and speaking as a butta-lovin' girl, there was a tad too much of it in this dish. I do know that butter makes everything better (I can't tell you how many times my 350 pound chef-teacher at ITHQ said this), but this was on the 'too much' side. 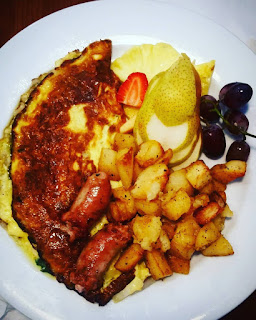 As a friend mentioned on Facebook when I posted this picture, 'why would you actually pay to eat that?'. Well, I didn't pay for it and I wouldn't have! I don't know if you can see it but there's a whole layer of butta kind of floating near the omelet. Ya. That's a whole layer of butter. It's like the omelet is Canada and butter is a whole province. You see what I'm getting at here? I'm going to have to tell my old prof, chef Jean-Jaques Morand, that he was wrong about butter. You CAN put too much. Apart from that nonsense, the omelet was alright but nothing spectacular: the seasoning was done right,  but the cheese wasn't completely melted. The homemade sausage was full of fennel which was quite tasty but it was unfortunately dry! Ugh.

The potatoes were the best part of the dish: crunchy, hot, soft on the inside and very well seasoned. Seasoning is very important, kids! The fruits were hanging around there and apart from the pear that was nicely cut, they were pretty much thrown onto the plate. 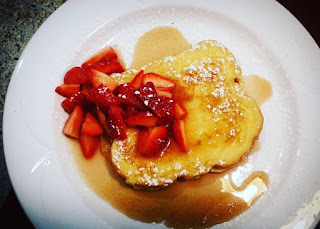 Pain doré. Let's face it, this is NOT pain doré. It wasn't thick enough, it didn't have a nice crust, and it just wasn't pain doré. Actually it tasted more like an uncooked pancake. I can honestly say that the best thing about this dish was the fact that there was a bit of lemon in the batter and that was very refreshing and awesomeballs. This pain doré was a big disappointment. 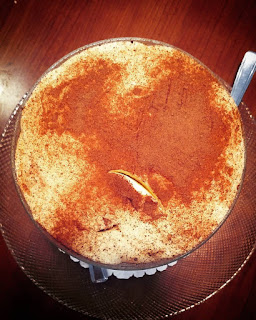 I had to make it up to Bridgert so I ordered what I had ordered last time: tiramisu. Ah, tiramisu: the dessert from Italian heaven. And you KNOW that heaven is filled with wonderful food. MmmmmmItalian heaven! It certainly did not disappoint! That soft cream that tasted just enough like coffee. Just love.

Service was alright. Could have been better. The waitress frowned when I said no thanks to coffee but I'd want a hot chocolate please. I just don't like coffee. I've tried. I am not a fan. It took her a while to bring us the menus and may I just mention that at that point there was only one other person in this huge restaurant. We had to ask for water and I must point out that at some point her boyfriend came in with their 4 year old and although he was totes adorable, it just didn't feel right for her to have her family at work with her.

I have to be honest here and say that unless they drastically change their breakfast menu, I shant go back.