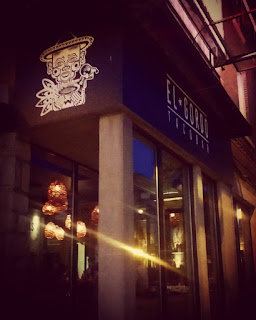 I bike past El Gordo all the time. It's only natural that I'd want to eat there. AND it's new. AAAAND they serve tacos. AND mojitos. Hello. Checking them out on the internet, I discovered that it was more like 'goodbye' because it was obvious that the food sucked a**, if you know what I mean. Ew, I don't even know what that means! Seriously, even for a new resto still trying to fit in and find its way, the critics were very harsh. One thing really made me want to still try it tho: the fact that you can get any drink in pitcher form. Yep, that's right! And since I was about to be able to start drinking again after 1 month off.... Hello mojito! 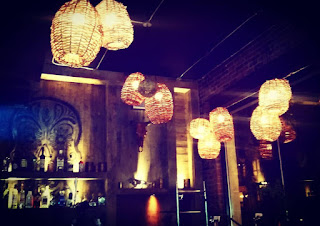 It's way smaller than I thought it would be inside. I think they may have more seats outside than in, which is a rare occurrence. I really liked the lamps which kind of gave a homy, almost gypsy feel to it. Skulls were drawn on the walls, dia de los muertos style. The decor was a bit over the top but keeping with a chill feel. And I'm sticking to that! 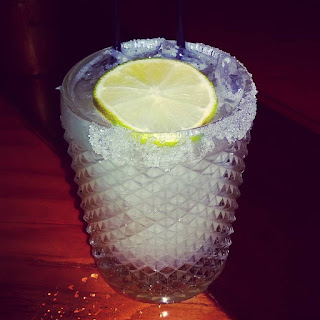 Jad had called me at around 8h50 to tell me that the 5$ (usually 9$) margarita deal was finishing at 9. Totes wanted one to start off my evening of mojito drinking. I really loved the glass! It looked like a recipient you put your candle in. Right? Totes. The margarita itself was whhhaaaayyy (you know I'm serious when I add h's everywhere) too salty and sour. It made all my taste buds go cray cray. And not in a good way. And it was strong as all hell. Wow. Imagine this ad: 'Wanna get drunk fast? Well, just have a sip of El Gordo's margarita and you're on your way!'. 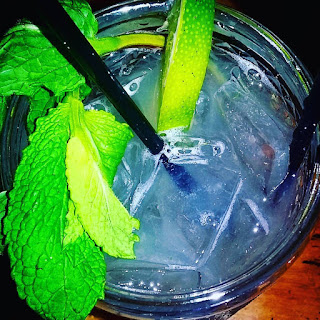 This is the reason why it all started: el mojito. Ah yes, my love affair with mojitos rages on! We obviously had to get the pitcher for 40 $. The waiter brings it to our table and also brings a can of San Pelligrino limonata. Why you ask? Well, he informs us that this drink is SO strong, that he STRONGLY recommends we dilute it. Hahaha! Me, dilute a drink? NEVER! But I sure did, after a sip. Ohhhh, did I ever. It was pretty much like taking shots one after the other. Dang! So, as weird as it was, that limonata did come in handy. 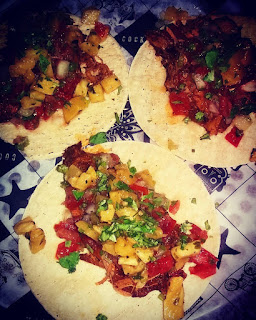 Tacos con puerco. I was bracing myself for narstiness. For realz. But these were really not that shabby. Not too shabby at all. The pork was moist, the pineapple brought in a bit of sweetness, the salsa was a tad too hot (and I LOVE me a good hot-as-hell salsa) and the cilantro was obviously awesome in there. All in all, a great little taco. Hello little taco, you want to get in my mouth? Ya, that's what i would say to it if it'd be walking down the street. I know what you're thinking: i need to stop doin' drugs. Ya, I'll get right on that.

Service was not the best. I had to actually physically get up to ask the waiter for water because after 5 minutes of being seated, I think it's ridunculous to not have a glass in front of you. The food arrived quite rapidly to our table and the drinks even quicker. That's the way I like it. All in all, really nothing to write home about. I ain't writing home about this, you best be sure of that.

Tacos are the new 'in' thing right now so there are about 800 new restaurants that serve them up in the area. I went to El Gordo and I had my pitcher of uber strong mojito.  I'm happy. I'm ready to try something else.