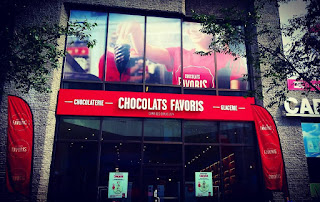 Val just wouldn't shut up about this place. It was 'Chocolats Favoris this' and 'Chocolats Favoris that'. For at least 2 weeks. I got so sick of this that when she suggested we go on Sunday, I said sure. But ONLY because I wanted her to stop talking about it. Ok, the real reason was that I wanted to see what all the fuss was about. I had heard little things like 'best ice cream ever' and 'oh my gawd you'll love it'. You know, little things.

Chocolats Favoris has been in business for over 30 years and has been serving up ice cream for the past 20. And THAT was your bit of history for today. They are the new baby in the Quartier des spectacles, located in the Complexe Desjardins. The place is freaking huge! Damn huge. Humongous. Mammoth. OK, iz big. Extra tall ceilings, white everything à la Juliette et Chocolat (but better, of course--can you sense a bit of bitterness here?) and chocolate e-very-where. You can't hide from it, it's everywhere. Mmmmmchocolate. 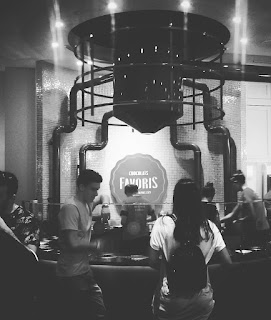 Aight so, one thing that has made this place famous is their 12 dipping chocolates. Whaaaaaat. So you get either vanilla or chocolate ice cream and you just get em' to dip it, dip it good. And dip it good, they do: they dip the ice cream for over 45 seconds to make sure there's a large coat of chocolate on there. Rrrrrrr (enter Homer Simpson drooling sound). The one sucky thing is that if you decide on the chocolate ice cream, the girl told us that they have to put it in a cup because it doesn't hold or some shizzle. Not cool man. Not cool. Obviously, this made me choose vanilla. I wanted to full experience. 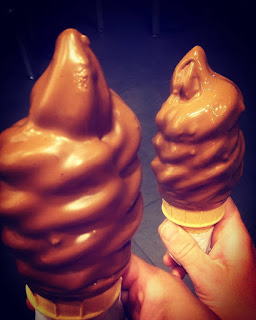 Dulce de leche for me and caramel fleur de sel for Val. I often say stuff like 'heavenly' or 'it tastes like heaven'. Well, forget about all those times because this right here, THIS is mother f*ckin' heaven. In a cone. I don't even know what to write. I was flabbergasted by the yumminess of it. And that, people, barely ever happens to me. Fo serious. The fact that they dipped it for such a long time (seriously, I even looked at my phone--cause who has a watch these days) made the dipping chocolate oh-so-thick. There was at least a centimeter of awesomeness coating the ice cream. And it was thick. And it was awesome. AND it was the best damn sweet thang I've had in a long time. Both flavours, being caramel-y and all, tasted about the same, but that just means twice the goodness in ma mouth. I just couldn't believe how great it was. Woooooooooooooow. I didn't want it to end and when it did, I was a tad disappointed to find out that the humidity had gotten to the cone and it was not as crunchy as I'd hoped it would be. But who cares about that cone. What matters is the heaven on top.

Service was quick and uber efficient: pay, give name, call name, serve. And they were about 7 behind the counter so it was fast fast fast!

Food: 1 miiiiiillion! But seriously. 9.5 because of that humid cone
Service: 9.5

Would I go back? What do YOU think?

ps: I already have plans of going back next week :p

I am drooling by just looking at your cone. My favourite is alos dulce de leche and caramel, the thick toffee layer over vanilla icecream dipped for a good time is just pure indulkgence.

Nice! thank you so much! Thank you for sharing. Your blog posts are more interesting and informative. I think there are many people like and visit it regularly, including me.

I truly value your post. A debt of gratitude is in order for sharing such a valuable data.

Thanks for sharing amazing information !!!!!!
Please keep up sharing.

This particular post is really very interesting. It has a really great peace of Data,
I enjoyed very well with this particular blog it has very useful information
I like to much the style of this Article
thats really nice and informative article.Thank You.
Cheap Snow Blowers


Confessions of a twice cancer survivor my journey

Escort service in Jaipur we supply that funny exquisite & pleasing nature woman that shall he up a number of pains of life. There must be something different to keep Warm which makes outcome If we are pressure of work load. Jaipur cham cham's f And you need to come in situation who will assist
escort service in jaipur

Cool vap juice, at low price, you will love it
Vape e-juice

those icecream looks so good !!!