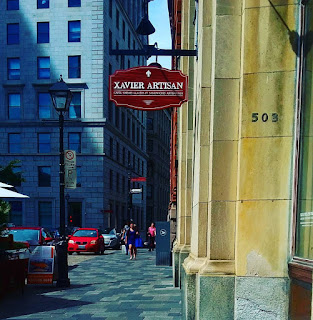 I was invited to try Xavier Artisan. OK, so this means nothing to half of you but for me, it meant that a: I touched base with one of the biggest restaurant groups in Montreal and b: I could talk about my blog AND get invited to restaurants on top of it.

At XA, pretty much everything is homemade so that's about plus 8 points in my books. And it looks good. They make simple look good. Fresh and good. Yummy and fresh and good. Aaaand you catch my drift. On top of it, and everyone should know this about XA, they give all their day's worth of leftovers to Old Mission Brewery when they close up shop. They're like the little angel of Old Montreal. The smart little angel: generosity AND awesome PR! Smart, smart, smart! 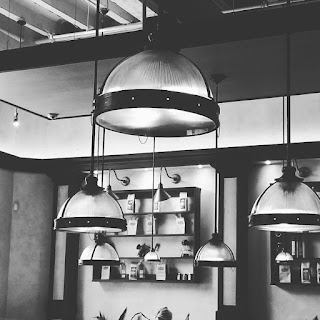 XA has a huge space, right smack in the Place d'Armes in front of the basilique Notre-Dame. I mean, there's about 4 million tourists there every freakin' day. Even if a small fraction of those tourists decide to hit XA, they will make a small fortune. It's half lofty with those uber high ceilings and exposed pipes and half French bistro with the wooden shelves and pantry and cute, really well labeled homemade products displayed everywhere you look.

How it works is that you can either pick salads, cold sandwiches, homemade beverages and desserts from the self-serve fridges or you can get warm sandwiches and ice cream at the counter. I was told to ask for Geneviève, the manager I can only presume, and she turned out to be such a delight! Sometimes, I think about how my OWN restaurant would be like and there's no doubt in my mind that I'd need a Geneviève to welcome the clients. She was very professional, yet really friendly, showed us everything and also told us a bit of the restaurant itself. I'd pay her around 49 THOUSAND dollars... an hour :) 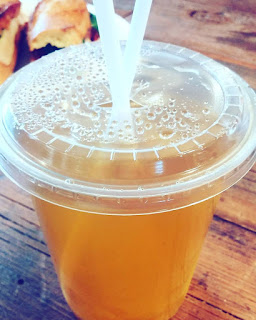 Mint tea. It was unsweetened, which made it that much better. Cooled tea is one of my fave summer drinks! Well, fave summer drink that does not include alcohol (that's a mojito!)! The mint was very present and aaaaawesome! Can you tell I like mint: MINT tea, Mo-MINT-jito? 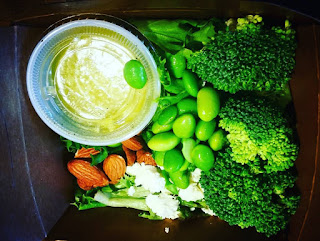 Salade supergreen et féta. This was so cute! They had me with all that green shtuff. I like me my green shtuff. And I LOVE me some edamame. You don't see those enough! The brocoli was nice and crunchy, the cheese was soft and just salty enough aaaand the greens were mesclun. Why? Why you do dis to me? So apart from the mesclun, which you guys know I dislike at the same level as dog poo on my front steps (what?), it was a very tasty and healthy salad. The vinaigrette could have been a tad less on the vinaigre-y side but it was still very good.

We also decided (we=Jer) to try their home made chips, not pictured because it was just THE worst pictures in the history of chip pictures. They were crunchy and tasty and although the transparent spots on the bag would say otherwise, not that greasy. 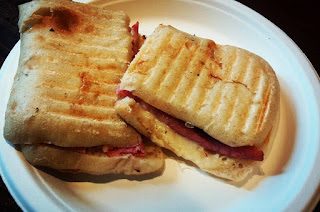 The Montrealer: smoked meat, provolone cheese, pickle, cured red onion, home made mustard on whole wheat bread. To paint you a picture of how much I used to dislike smoked meat, when I'd go with my dad or friends that 'needed to try Schwartz', I'd eat fries and a pickle. No smoked meat for me. This one was different and easily approachable. Hahaha! By that, I mean it wasn't as strong, I guess. The pickle was right on and the onion made all the difference when it came to that perfect bite. It was just cheesy enough without having cheese oozing all over the place and that bread was just spot on: soft and grilled just the right amount! 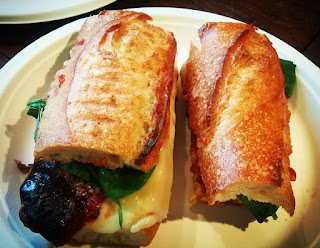 The eggplant parmesan: roasted eggplant, tomato sauce, mozzarella, parmesan, fresh spinach on a roasted baguette. The bread was crunchy and all that goodness, the cheese was cheesy and yummy and the tomato sauce was on par. The spinach added that nice colour to complete that rainbow and supplied the sandwich with greenery. I could have been a tad happier with more eggplant. After all it's called eggplant parmesan! Jer thought it would have been a bit too overpowering if more eggplant would be put in the mix but I say yes to eggplant all the way!

We also tried their bold soup of the day (they serve one bold and one simple soup every day!): pineapple and garlic. I liked it more than Jer-Bear but the garlic did not really fit in with the sweet fruit. Good try though! A for effort! 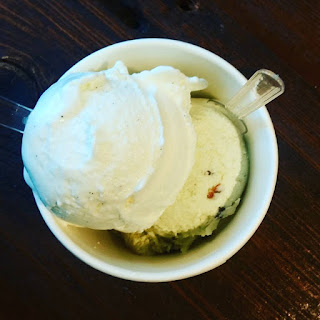 Home made ice cream. Yes AND yes. And more of that 'yes'. I decided on french vanilla and pistachio. Great choice Marie, great choice. You could see the little vanilla freckles in there. Is freckles the right word? I vote yes! And the pistachio ice cream was very pistachio-y without being TOO pistachio-y, you know what I mean? Both were just great and I'd go back right now for some-o-that!

Service was, as you can tell by my Geneviève crush, awesome. She shook our hands and smiled from beginning to end. She came and checked if everything was fine and she praised her restaurant just enough. She put someone else in charge of making us happy and that woman was just so damn proud of working there OR was the best actress ever. But I like to think it was the first one.

Food: 8
Service: 9 (only because the ice cream dude seemed a tad rude)

I think it's safe to say that next time I'm in Old MTL and I's got a little craving, I'll be heading to Xavier Artisan to say hey to Gen (ya, we're tight like that).