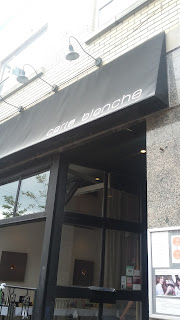 I was invited to the tenth anniversary of restaurant Carte Blanche a couple weeks back. I actually had to make sure it was a real restaurant. Why? Well, I had never EVA heard of it. And it has been alive and kicking for 10 years! Only a handful (I may be exaggerating) of restos in Montreal have been open for that long.

To make matters worse (and I say this because it was a bit embarrassing having to tell the owner), I once lived only a couple blocks away! Damn girl! I probably passed by Carte Blanche hundreds of times!

Carte Blanche is a French chef's baby. He came to Montreal a bit over 10 years ago and never left. He has many Martinican friends who helped him put a Martinique twist on his cuisine. Actually, he is present at the festival Martinique Gourmande which is taking place as we speak (as we write? as you read me!).

We got there a bit early as per usual (am I ever late? Really?) and when the clock struck 5 (OK, there was no sound, but you get it), I went to open the door and it was... locked. Pouet pouet poueeeeet. I looked at them through the window and it seemed like they were still setting up. Grrr. They opened the door at 5h05. Don't worry, I'm over it :) 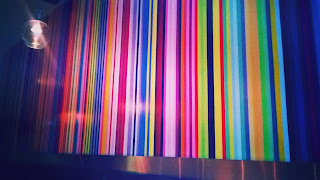 The place itself is actually quite small: they had changed it up for the event but it should not sit more than 30 people fo shizzle. They have a wall with multicolored lines, like a rainbow. Influenced by the fact that they are in the gay village maybe?

Aight so we sat down at this uber long table they had formed which hardly seemed practical. What do you do when you're in the middle and you need to go pee? What do you do, hot shot? What do you DO? OK, I'm just KIND of quoting the movie Speed here, which, by the way, IS one of the best movies of ALL TIME! All time I said, don't even try to say otherwise. Food started leaving the kitchen at around 5h45, which I thought was a bit late, seeing as I had told myself I was going to be outta there at 6h15 ish. 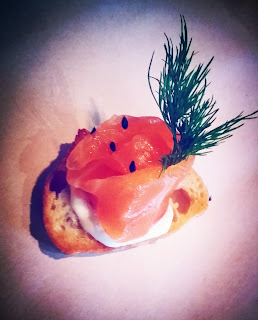 irst bite of the day! House gravlax with a mustarded (=word!) mayo. One of the best I've had. Ever. And I do NOT kid about my gravlax. Hells, I am a MAKER of gravlax at work so ya... I don't kid! It was coarse salt, maple and citrus and it was soft and melt-in-your-mouth èamazeballz. Of course, I like to use technical terms like 'amazeballz'. The little mayo right under it wasn't too strong as to not bury the loveliness of the gravlax. It was puuuurrrfect, as the cat would say. Or something less weird. 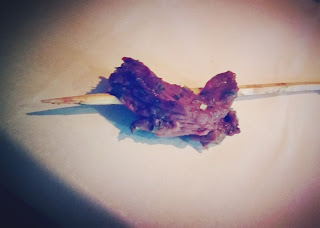 Flank steak on a skewer (in case you were wondering). Marinated in soya and caramelized onions, itas juicy and moist (ugh, word hate right here) and everything you want in a steak bite. E-VE-RY-thing. All the flavours came through in a great way and it was tasteful as all hell. Because we all know hell is oh-so-good ;) 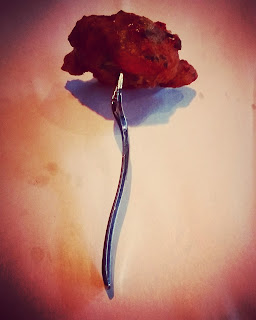 Cod fritter. There are no words to describe how much I like me a good cod fritter. OK, there are a couple. It was soooo good. I mean, how can it not be?! It was, damn it I loathe this word... moist. And it was crunchy. And we could dip it in some kind of raspberry/tomato/balsamic sauce which was just oh shizzle damn good. OK, that series of words may not have made much sense to you but to me, it meant that it was just AWESOME. 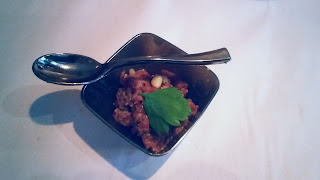 What I had been waiting for the whole {not so long} evening: kangaroo tartare. Ah, kangaroo, that meat that people are either afraid of eating OR that restaurants are afraid of serving. Or, I'm guessing that maybe it's a tad hard to get, given that it comes from the other side of the world. I actually had never eva EVA tasted this jumping creature (makin' it realz for all of you) and I'd been wanting to, big time. Well, it was all I had dreamed of AND more! So, it was kangaroo with pine nuts and an olive tapenade which was not overwhelming at all as it tends to be. It had such a nice taste and a great texture. In my head (ah, my tiny little head) this meat was going to be on the tough side. But noooo! It was the opposite! The flavours went really well together and it was like a partay in ma mouth!

Hey, we both lived a couple of blocks away from it, and I too never set foot in there.