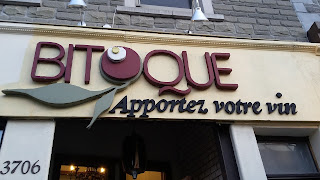 I did a summer internship in a '5 star' hotel kitchen in Corsica 4 years ago. It's hard to beat that summer: it rained a grand total of about 5 hours over 3 months. And I met Emy. Even if she is over 10 years younger than I am, her and I bonded and it was so much fun traveling with her to neighboring villages and what not. But enough about the best summer EVER, let's talk restaurant! Her and her boyfriend are in town for a couple weeks and after spending Sunday together perusing Montreal, I was looking for a good restaurant to eat at. In my hood (sud-ouest), not that many places are open on Sunday. Seriously, sometimes it seems like only a handful are open. We chose Bitoque for 3 reasons. 1- I LOVE Portuguese food. 2- It's BYOW 3- Well, it was open!

Bitoque is located right where every other restaurant in MTL is located. Living here, I can bet you that at least 1.2 (this is a very specific number, as you can tell) restaurants open every 1.4 weeks (again, very specific!). I don't even need to get out of my hood to go eat, and I could do so every day for a good 2 months. I swear. 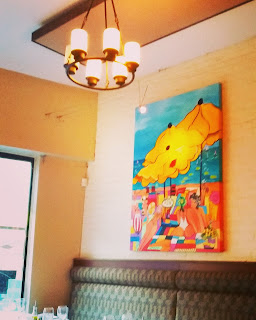 The restaurant is actually quite big, way bigger than what you would think from the outside. Its décor is sort of mixed, which I wasn't too fond of: different artists painted different paintings and they did not match at all. Brick wall here, old booth there, it was a mix and match kind of situation.

We decided on only tapas, which suited me just well. I loves me many small dishes, so I can try lots of different dishes! The menu suggests (yes, the menu can talk) we have 2 per person so just to be sure, we ordered 7. Something that must (yes it MUST) be mentioned is that on their tapas menu, some items have * besides them and those aren't available on weekends. When we asked, we were told that yes, they were available on Sunday. This makes me rethink the whole concept of weekends. I mean, can we say that Friday and Saturday is the weekend? Why not Tuesday and Wednesday. You know, life is full of difficult dilemmas and questions. And THAT, kids, was my thought of the day.

We were absolutely and positively starving when we got there so imagine my face when they start us off with tiiiiny little olives. Well, I devoured them. It was like I was on a deserted island and I had just found a fruit or something. You know that feeling? :D I also devoured the warm bread they brought us. The loveliness of the warmth was somewhat ruined by the fact that they put it on the table with butter in a cup. Butta in a cup. Butta. Cup. Come ooon! In a cafeteria, yes. In a restaurant, no! 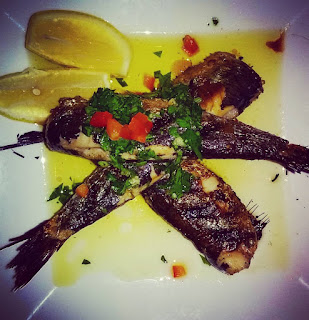 Grilled sardines. I used to loathe sardines. I remember, in grade 4, Ed used to bring a little box of sardines for lunch and whenever he would open it up, half the class would start gagging. But I've learned to know that those were tiny, insignificant. ugly, stinky sardines. When I visited Portugal, I ate real mamas. And dem mamas were good. Makes no sense but y'all know what I'm saying! These sardines were packed with lemon and pepper and were nice and crispy. They were a bit dry but I think the flavours made up for it. 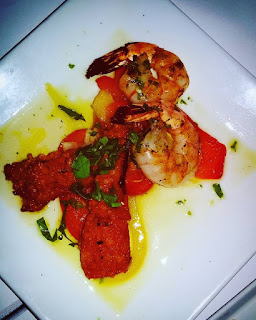 Tapa do dia OR tapas of the day: shrimp and chorizo. We were three, there were two shrimp. Not cool man, not cool. The chorizo was amazeballs. A-MAZE-BALLZ. It was juicy, it was spicy, it was screaming to be eaten. And be eaten it was! The shrimp were of a disappointing size. I'm a shrimp girl (some would even call me Bubba... OK.. no one ever called me that) and I know good shrimp. There was also some pepper and onion that were perfectly cooked and quite garlicky which fits me just perfectly. I loves me some garlic and I loves me some onion! Basically, I love all the stuff that will make me stink. Maybe that's why I'm still single. 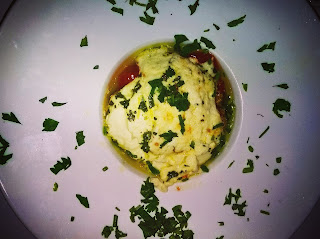 Cherry tomatoes with basil and goat cheese. First of all, hello lactose. Or more like hello indigestion. Let's just say I sacrifice my stomach's health a lot when I go out to eat in restaurants. The tomatoes were hot as f*ck, the basil obviously went well with them and the cheese was lovely and soft. It was good but it wasn't special. By that, I mean I could have cooked that exact dish at home. If I can say that, I usually don't order it. 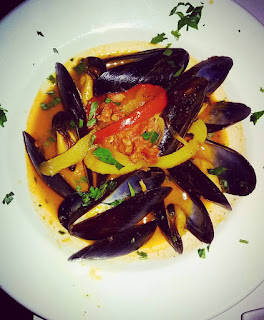 Piri-Piri mussels. I love good mussels. I am a fan. These were OK. They weren't big enough and sometimes I'd have to look really hard to see if there was one in the shell. OR maybe I just need to get new glasses! The sauce was what I loved and the chorizo. Wow! Seriously, chorizo in all the dishes was BANG on. Totes. That spicy loveliness in a spicy sauce. Mmmmmm! My lips were screaming out but I did not care! In the end, I was just scooping up that sauce with an empty shell. F*ck the mussels, I want the sauce! 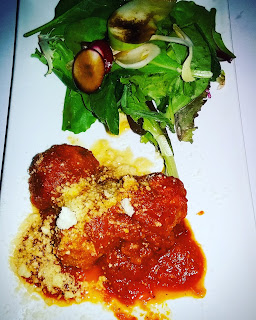 Veal and pork meatballs with tomato sauce and parmesan. It was tasty and moist but nothing special and that salad... What in the holy hell was that salad doing there? I hate filler salads! And on top of the filler salad, a piece of caramelized apple. Why? Why I ask you. 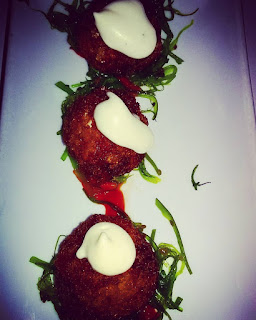 Cod croquette on wakame with aioli. I need to know one thing: is wakame in any way Portuguese? Any way? That's what I thought. It was good, actually one of the best wakame I've tasted (I am not a fan) but why? The croquettes were a bit dry and I felt like there were still many fish bones in there which made it quite unpleasant to eat. It was like 'when will I choke?' 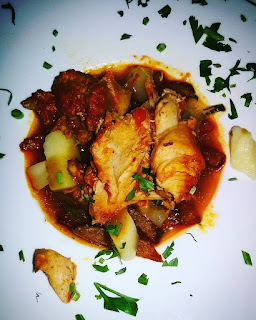 Pulled chicken poutine. See the fries? No? That's because there were 4. And they were old and soggy. I'm already not a poutine fan so giving me crappy fries really doesn't help here! The chicken was, AGAIN, on the dry side and the sauce reminded me way too much of the narsty brown sauce that is usually on that bad 'regular' very Québécois poutine. It was just not as good as expected. I'm kind of sad about it actually. Imma gonna go cry now.

Service was very good and efficient at first but as it always tends to do, became slower when more people came in. We had water on our table 3 seconds after sitting down and our wine bottle was uncorked 1 minute later. We were very warmly welcomed and our waiter was quite patient (we didn't know what we wanted to eat at first). He changed our plates many times throughout the meal and although he seemed new to the service world, he did a great job. Pat on back.

Imma gonna go ahead and say (again) that there are 8000 units of restaurants I need to try so I'll get back to Bitoque when those are done (and hopefully, sh*t won't be as dry).