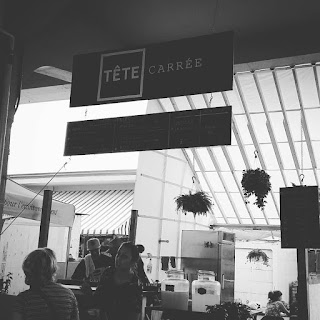 I love it when someone invites me to try their restaurant. I love it even more when they send me a nice email to go along with it. Tête Carrée is a food stand opened from Thursday to Sunday in Marché Jean-Talon. I visited last week with my homegirl Isa.

So you get there and immediately, friendliness oozes from the place. The girl and the two guys are extremely nice and smily. I like smily people. They have samples of their pizzas (mama loves her samples--which is why I also love going to Costco) for the passers by to taste. I quickly meet the dude that is the instigator of Tête Carrée, and I love his enthusiasm. I also like the way he thinks: we were going to get most of the menu to be able to rate more thangs for my blog. Lovin' it. He actually was head chef at Le Garde Manger (hello, I'm a HUGE Chuck Hugues fan. I may (or may NOT) have followed him during one of his visits at ITHQ when I was a student there.

What's cool about this place is that hey, they are actually located IN the market. Right smack IN it. So they get to cook the hell out of fresh veggies and what not. Oh and the chef created this mix between a nan bread (heeeello!) and a flat bread to make sure the bread never gets stale (ok, I realise 'never' is a big word here), can get re-heated without changing textures AND can be put in the oven without browning. It was fluffy goodness, that's what it was. Very savoury and well balanced. Oh, and they sell it too. What.

The place itself is, well, tiny. It's a booth for Heysus' sake. But they are making the most out of it, making it look really darn cute and welcoming with hanging plants and a table at the back. Oh, and they change the menu every so often, when produce become in season. I LOVE that. 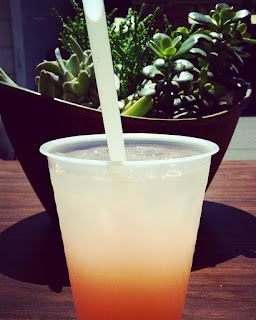 After sitting, we had a refreshing lemonade because it was hella hot. Unlike today, when it feels like winter might be creeping back extra early. They had two kinds: lemon and rhubarb. Hello, I'd be a fool not to have the rhubarb one. Although it was not a bad drink, it didn't taste anything like rhubarb. Don't get me wrong, it was tartness all the way like rhubarb is but that was it; just the tartness transpired. As I said, not a bad sip-o-juice but not a rhubarb lemonade kinda taste. 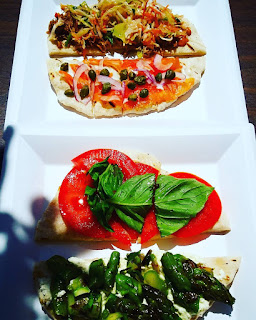 Yes! Lunchtime! We were uber happy to be able to taste 4 pizzas! Pizza? What! FOUR pizzas? Whaaaaat!

Let's start with the asparagus one. Or the 'Jean-Talon' they called it. May I just mention that i arrived a week too late because they made this with fiddleheads the week before and I would have loved to taste THAT. I loves me a good fiddlehead. Come to think of it, I haven't eaten one of those bad boys in the last year. Gosh. Back to dem asparagi! They were DEEEE-licious. As fresh as can be, charred on the grill, per-fec-tly. Ok, that's it, I'm going back NOW. Did I mention there was homemade ricotta under there? Yep. Homemade. This was so worth messing with my lactose intolerance. With a bit of oil, it was the perfect summer bite. It could have used a tad more salt tho... y'all know how I feel about salt.

Tomato basil (or the Little Italy): the basil was nice and very fragrant and there was this wonderful little garlic oil, made in house (or in booth?) that I wanted way more of. What? I loves my garlic! The tomato was under seasoned and a bit bland to be honest. Not my fave.

Smoked salmon, capers, onions (or the Mile End): this, we felt, was all-around unoriginal. I mean, OK, Mile End bagels... I totes get it. But as ingredients, these are go tos for many a-people. MANY. Everyone. I wanted more originality. Apart from the lack of excitement, it was good, but it was missing something like lemon perhaps. Something to bring out the aromas.

Pulled ribs (or the Quartier Latin): this was a very busy piece-o-bread. A busy bee one might say. OK, no one would say that except me. The meat was very savory and had a great BBQ taste to it. The coleslaw on top was oh-so-fresh, adding just what was needed to round out that dish. The chipotle mayo was a nice little surprise that my taste buds very much appreciated! It was hot and tangy and paired awesomely with the meat. The whole thing became a bit wet though under all those layers of ingredients. But who cares right? It was just so happy in ma mouth. 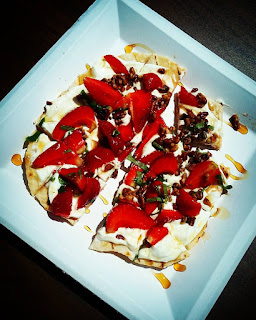 The dessert pizza. Or the holy-shit-this-is-amazing-and-freaking-heavenly pizza. Fresh Québec strawberries, maple syrup, pecans and lemon balm. It tasted fresh and just sweet enough. As a base on the bread, there was lovely labneh, which equaled out the savoury and sweet. It was the perfect base for this. I would like some more please!

Service was awesomeballz. The owner came and sat with us and explained his ideas and recipes. He also explained why it was called Tête Carrée. Well, we all know why, right? It's pretty much the french equivalent of calling french people 'frogs'. Food arrived in what seemed like only a couple minutes while we were happily sitting at the table, enjoying the sun.

Next time I'm in the market, I'm fosho passing by. I would love to see them branch out and do something else than pizzas and salads tho. Hint hint ;)