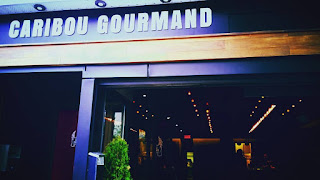 I was invited to the [rather soft] opening of le Caribou Gourmand last week by Cat, a girl I used to work with at Juliette et Chocolat, also known as my worst professional mistake, aka the bosses were butts. I'm being nice here. Anyhoot, getting back to the Caribou!

It's located in the Mile-End/Outremont. Who knows now with the extended boroughs and the neighbourhoods and the adjacents and what have yous. Point is, there are around 8000 restaurants around just looking for yo love. And they will do whatever is necessary! This is why every single establishment that opens its doors must be damn special and have a damn good idea. 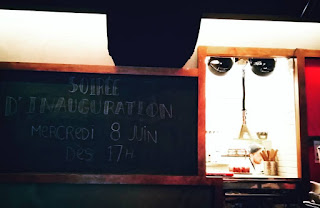 It wasn't the most awesomest (oh, it's a word) of days to have this event. It was raining and flinging flanging cold and winter had decided to come back in June. JUNE, people! My homegirl Lea was meeting me and her bus was running late so I actually had to go in before dying of hypothermia. I'm being totes serious here. 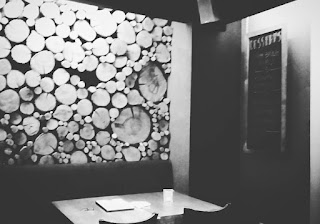 The space is actually quite small and rather cozy. There is a long bar that transforms into a high table, so you feel like you're kind of PART of the bar. You know, like, if you reach far enough, you could actually serve yourself your own drink! Hahaha. Dudes, I totally have to try that! The front wall completely opens up and that would have seemed 1000% cooler (no pun intended) if it wasn't -8 degrees outside. I'm exaggerating, it was -4. Oh but I must mention that when two girls started smoking right outside, I felt like I was smoking both their cigarettes. At the same time. So that wasn't too awesome. I've smoked. I've been there, I've done that. I dson't wanna dso it anymore. 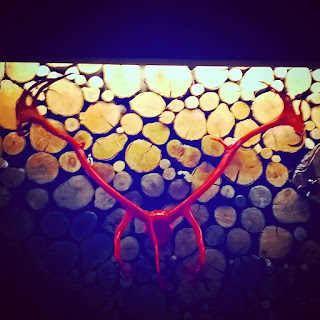 There's slate everywhere, or I guess slate colour. It's actually nice, it fits. I felt like taking out my chalk and drawing on the tables. Cause, you know, I's got a chalk reserve in ma bag. And there I go, babbling again. It seems rather 'industrial' with pipes everywhere but also kind of the opposite, with a wall made of tree trunks, plants on the walls and big ass caribou antlers on another one. There's about 25 seats in all, but I'm sure there's more on a regular night. OK, hopefully there's more on a regular night.

Aight, so basically, beer was 3$ and wine was 5$, which I thought was just about right on. Some itti bites were going to be offered so that we could get an avant-goût of their menu. Seriously, I've been to huge mother freakin' restaurant openings where soooooo much money is spent on all-you-can-eat and all-you-can-drink and then BAM, they close. Just like that. I'm just gonna go ahead and name Kyozon and Vicolo as examples. 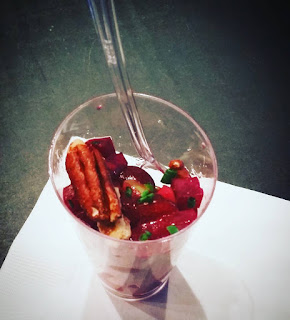 Beet carpaccio: pecan, grapes, maple and tarragon. Tasted really fresh and the grapes were a perfect match. The beets were cut into perfect cubes, which made it that much better. For me, anyway. I had a hard time finding that maple vinaigrette tho. The pecans were good but any nut would have been good in there; it was there for the texture more than the taste, I found. Oh, I sound so sophisticated. OMG, I should totes meet the queen. Or... not? Moving on... 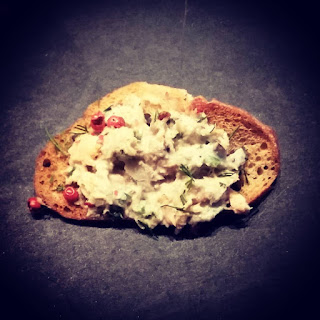 Salmon rillettes with pink pepper corns and tarragon. Oh, except it was definitely dill in there. Yep, I know dill when it's dill. Does that make sense? No. Was it tarragon? No. Anyhoot, I've grown to love dill over the past couple months so I liked it. The pink pepper corns were awesome in there, again a great match. Points for everyone! The bread got kind of soggy with all the waiting time in the kitchen, I can only presume. And although this was good, I felt like it needed more originality. This will not get you waves of people. Waves. People. Disclaimer: I swear I haven't taken any drugs.

Yes, this dumbie forgot to take a pic. I'm gonna blame Lea, it's easier that way (sorry gurl!). Chicken liver mousse. Which, by the by, sounds about 800 times more refined in French; 'mousse de foie de volaille'. No? It was close to perfect and smooth as a baby's butt. You know, people say that all the time. Well, damn it, it's true. I can honestly say that all the babies' butts I have touched (wow, how creepy do I sound on a scale from 1 to 1 million?) were uber duber soft. Hence, this was damn smooth. Little gerkins, very thinly sliced added some texture and a briny flavour that paired really well with the richness of the mousse. Mmmmm. Mmmmousse.
PICTURE #4 -- MISSING

Damn it Lea! Last bite was beet coulis, dijon mustard 'mousse' and cracklings. Cracklings: funny word. Ha! Cracklings: pork meat that has been roasted and then confit (confied?).  The bad thing about this was that the vessel for this dish was a spoon (you know, those appetizer spoons that look like it could be for your wonton soup) and so it was really hard to get everything in your mouth in one shot. So then I had to pick at it with my hands and that was on the 'meh' side of things. Anyhoot, the meat was really nicely cooked and was oh-so-tender (A+), the beet was nice but a bit too earthy for this and the mustard was overwhelming. You know... too much of a good thing (I loves me some good mustard).

Service was good. I mean, we were seated right by all the waitresses so it wasn't that difficult. I was kind of disappointed  that we only got to taste four things and even more disappointed when the waitress would pass by with the same bite we had just had.

There are about 127 restaurants on my to-go list so I'm not sure this made the cut. I'll get back to you on that ;)