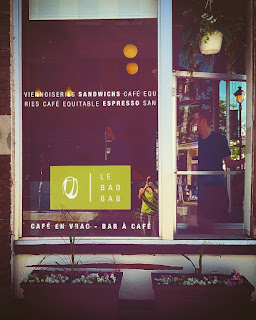 I was looking for a new spot to eat breakfast with my mama and Le Baobab just happened to be on my list. It's located on one of MTL's newly hot street, Wellington! Oh, iz hot. There are so many restaurants on Wellington now... and good ones too! This fact makes this blogger a very happy one! 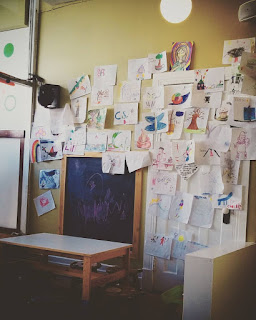 You get in and it's oh so cuteness. Wooden everything including shady, rickety wooden floors that kind of look like they would give under someone heavier than 200 pounds. Just sayin'. French/Creole music is playing and everyone is in a good mood. There's also an uber cute kids corner with 8000 drawings on the wall. It looked like so much fun that I felt like I should be sitting there too! 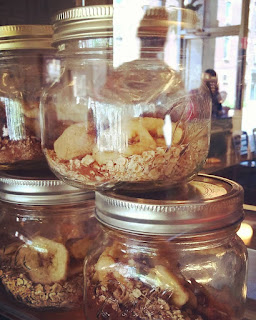 We ordered at the counter and they would bring us our food at our table. We looked at the menu for a while and then, right in front of us was the answer: oatmeal mason jars. What!!! They had three kinds: apple cinnamon, banana chocolate, and date pumpkin. I totes would have picked date/pumpkin because, let's face it, it's the most original one, but apparently someone had forgotten the pumpkin. Grrr. So I had the choco/banana one and my mom had the apple/cinnamon. 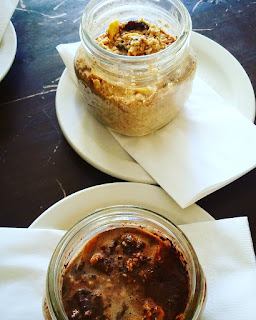 Alright, so my mom's looked like normal oatmeal n' milk. Mine was drowning in milk. Drowning. It was kind of like a soup. I'm not kidding. They had taken dried bananas so they were still hard and that was not very pleasant. On top of it, the chocolate was very overwhelming. I had agreed to a little bit of breakfast chocolate, not a mountain. The apple/cinnamon one was good and normal lookin' :p It was actually very tasty and the apples in there were sweet and delicious. 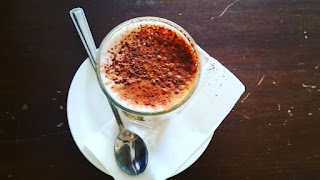 Hot chocolate: too liquidy. There was cinnamon and cacao powder on top so that gave it a nice first sip but the rest was kind of watered down.

Service was nice and courteous but nothing great. We ordered stuff, they gave us stuff. That's it, that's all.

The concept of oatmeal in a jar is good, but as my mom pointed out, for it to be liked by people like me (ze blogging kind), it has to be a bit special. Not like apple/cinnamon or choco/banana. Something more original guys. Come on. I'll be back when you have squash n' bacon or better yet, lemon n' mascarpone oatmeal on the menu.