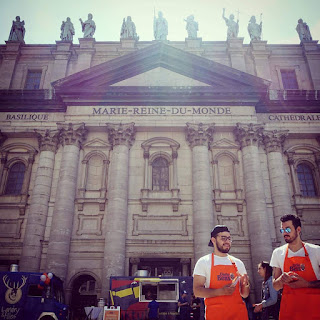 I sadly could not attend this event. Damn it, I hate missing stuff. But I knew a review would be in good hands when I sent my friends Jer (look for him on instagram https://www.instagram.com/bigheadjer/) and Jad.

So my Super Food Blogger friend Marie was invited to this Montreal food truck event, some sort of Food Truck Battle Royale, because she is a Super Food Blogger and people want to be seen and eaten out by her. BUT, because of work she couldn't make the event, and so I happily volunteered myself to go in her stead, along with ol' buddy Jad to assist with his own brand of food jadging.  However, she probably shouldn't have sent us because I'm a terribly tardy Reviewer-in-Lieu-of-Actual-Reviewer, as this review is maaaaybe three weeks late. 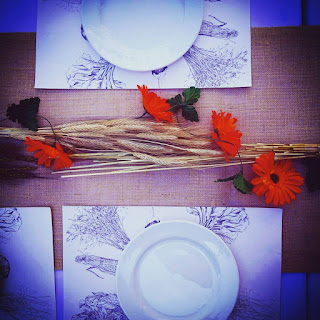 First of all, it was a gorgeous sprummer day, so I was in a generous mood.  Second of all, whoever had done the decor had done a really nice job, all barny and woodsy and flowers on the tables and barrels and stuff.  It made me feel like I was a real live hipster or something.  Third of all, the event was held under the benevolent gaze of some stone statues of old men in funny hats lining the cornice of a magnificent cathedral façade, so bonus points.

Hipsters and Saints, together at last.  Aaaah.  What a time to be alive.
Having not read the fine print like a good Reviewer-in-Lieu-of-Actual-Reviewer, I arrived to be a little taken aback to see Uncle Ben's posters everywhere.  So apparently this is how the thing worked.  Uncle Ben's is launching some new ancient grain and rice mixes, and to kick it all off, they got some Canadian food trucks to do a cook-off with their products.  We, the attending Montreal public, got to submit our ballot for the best recipe of the three Montreal trucks in attendance (there were nine trucks in total nationwide, and three events in total, the other two being in Vancouver and Toronto), and the eventual winner would go on to tour Canada with that recipe or something.  The details are sketchy.  In my head only, though.  I'm sure it's on Google somewhere.

Now, I've had a short and chequered history with Uncle Ben's.  I remember when I was Fresh Off the Boat in Canada (I can say that see, I'm Asian like Eddie Huang), and trying Uncle Ben's for the first time and wondering what the hell how do you people eat this rice that doesn't stick together with chopsticks what the hell.  Anyway, I never tried that again.  I was happy though that after a long absence in my life, Uncle Ben was trying something new, and I was there to be on the receiving end of it.  With a plastic fork this time.  Or maybe it was just the beatific looks on the statues that gave me a sense of peace, so I didn't feel too negative. 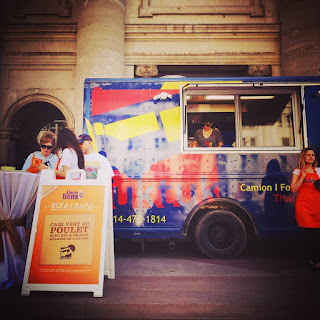 I've also had a long and chequered history with Montreal food trucks.  Man, I love the IDEA of food trucks?  And eating on the street?  And all that?  But I don't get why in other places, a stall can set up, lay out some tables and chairs on the sidewalk, and serve hot mouthwatering cheap and delicious food to you in MINUTES, and we have to line up like chumps for three quarters of an hour to get a tiny grilled cheese sandwich and maybe a gherkin on a toothpick.  For FIFTEEN DOLLARS.  Oh wait I wasn't supposed to rant too much because that being said, you can get some damn fine tiny grilled cheese sandwiches and maybe gherkins on toothpicks from these fine mobile establishments. 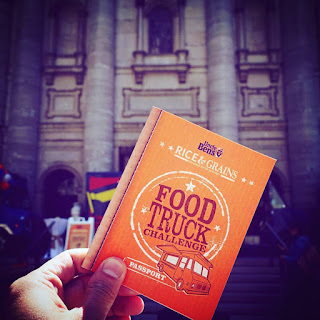 Anyway Jadge Jad and I got our "passports" for the trucks, got the briefing from some fresh-faced young PR lady, and went up to each food truck to get our "passports" stamped and our three tiny paper cups of:

We picked a barrel and proceeded to social media the s*** out of our photos, and then proceeded to sample the food.  We were also fortuitously joined by Michael, guy from Haiti, who was just passing by and decided what the hey, food trucks and saints! 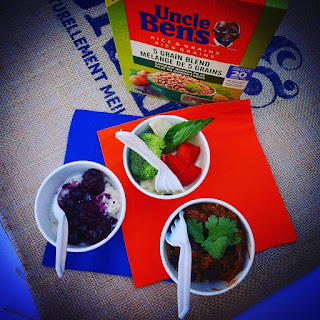 1. The Thai Green Curry from Le Tuktuk was lovely and coconut creamy, the fresh Thai basil giving a fresh sprummer greeting, the curry itself tasted quite rich had just a slight hint of sweetness and the taste sensation finished off with the lingering umami of fish sauce.  And I'm a sucker for the fish sauce.  The curry also went really well with the Rice & Grains 5 Grain Blend, adding just enough flavour and smoothing out the mix of textures in the rice and grain blend.

Food: 4.5 (6.5 for Chili without the Bland though) would eat again without the Bland.
Just the Bland: 2 (but still a lot better than when I rated my first Uncle Ben's fall-off-the-chopstick experience a -7.5 on the open-ended Yuck scale).

3. The Rice Pudding with Berries was quite nice.  I've never been a fan of rice pudding, but using Brown Rice & Quinoa did make it a whole lot more interesting texture-wise instead of just mushy rice.  Moreover, the milk sauce and fresh berry compote were a lovely match for a sprummer day, especially with the little flecks of sweet red pepper in the mix.

Food: 6.5 would eat again.
And although I never rate service, because to me the ruder the wait staff the more fun the establishment, I am doing this because it's Marie's blog and therefore her rules: the two greeters were a bit confused at the front of the steps, but there were some young fetching PR ladies who guided us with perfect toothy smiles throughout the process.  So, service: 6 ⅓ (⅓ for the great teeth, remember to floss, children, and to be born into a family that can afford orthodontics).

Our new friend Michael, guy from Haiti, did NOT like the green curry, judging it too strong in flavour, and he preferred the Chilli overall.  Most definitely not a sucker for the fish sauce, that Michael.

After our three tiny cups of Uncle Ben's, Jadge Jad and I decided to try out the new Kinton Ramen and I decided not to go back there again, except I did because Super Food Blogger Marie wanted to also put that review notch on her review belt and tagged me, her token Asian friend, to go with her but hey you can read her own review of that (note from Marie: it was SO not worth it).