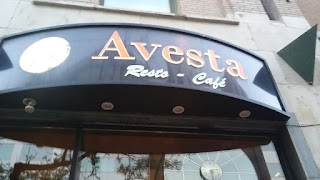 Last week, a bunch of us (a bunch is technically a number higher than 5---true story) from the gym were going to a restaurant to celebrate the birthday of our lovely... I'm gonna call her twerking queen or TQ for short. Why TQ? Well, long story short, she gets down on all four during zumba and well, you know how it goes :p 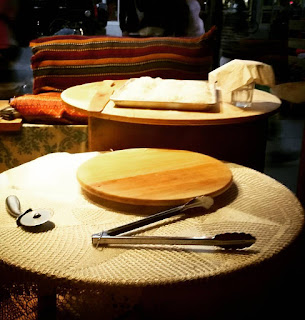 We had reservations for 9 PM. Gosh, last time I ate that late...well, I don't remember the last time I ate that late. Avesta is a Turkish restaurant and y'all know how much I love trying new stuff. This was definitely going to be new. We all knew it as 'you know, that place with that old woman in the window making lavash'. Except we didn't use the word 'lavash' but now that I know what it is, I can totes use it. Lavash, lavash, lavash. Oh, it's very thin bread that you can use to scoop things up like hummus or eggplant dip or more hummus. Hummuuuuuus.

Anyhoot, in hindsight, to be 8 rowdy girls (oh, and 1 boy---not forgetting you Gus!) in a quiet restaurant with veiled waitresses that seem even quieter than the restaurant itself was not the best of ideas. But hey, it made me discover a whole new cuisine!

The place itself is actually much bigger than what it looks like on the outside. Tall ceilings make it look even larger. There are a mix of tables and booths with beautifully designed table cloths. Turkish (I can only presume) music was playing: sometimes soft but sometimes it almost seemed violent! Hahaha! Yes, let's play violent Turkish music, no one said, ever. I officially don't know what I'm writing.

Let's talk food, shall we? When we asked the waitress how many appetizers we should get, she wasn't helpful at all: she gave us the 'favorites' and proceeded to bring us ONE plate (yes, for EIGHT people) with three regular sized appetizers (you would think that they would have increased the size to match the number of people!). It's a good thing some peeps around the table had ordered their own!

Hummus, Börek and the special Avesta (eggplant with red peppers). Let's start with the hummus. I love hummus. I am a huge fan of hummus. My 20 month old nephew lives for hummus (OK, I just needed to put a nephew fun fact in here). Unfortunately it didn't taste like much, obviously lacking in taste. I mean, it wasn't unpleasant per se, but it needed some lemon or sumthin sumthin. Plus, the consistency was too liquidy and actually hard to scoop up with the lavash (see, I did it again!).

The Börek, which is flaky dough with ground beef and potatoes was nice at first but then I became overwhelmed by the amount of dough. And THEN it just felt like I was eating somewhat of a shepperd's pie. When I moved back to Montreal for university way too many years ago, my mom used to make me a bunch of frozen meals and pâté chinois was a pretty recurrent one. I got oh-so-sick of it and didn't eat it for many decades (I'm slightly exaggerating here). I've eaten it again over the years but this brought back memories. Memories, man!

The 'Special Avesta' is charbroiled eggplant and red peppers with parsley, garlic and olive oil. I don't really have anything to say about this. It actually tasted tomato-y and that wasn't supposed to be part of the ingredient roster. The parsley in there kind of made it taste a bit off in my opinion. The garlic added a certain je ne sais quoi that I really liked tho. But, we all know I'm biased because I'm the garlic queen.  Think of it as a good or bad thing, it's just who I am. Half the time, my breath smells of garlic. OK, that's not true. Only a quarter of the time :) 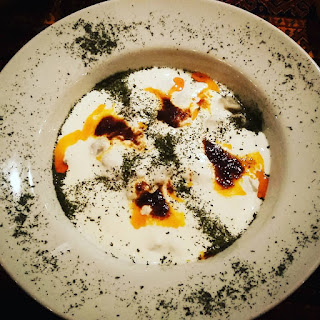 If I'm gonna eat at a Turkish restaurant, i better order a specialty. I'm still in the dark as to why not EVERYTHING on the menu is a Turkish specialty in this Turkish restaurant but hey. Hey. HEY! I had Manti: tiny dumplings filled with ground beef, topped with yogourt and crushed garlic with some red pepper paste and oregano on and around it. It LOOKED like a piece of freakin' art. Oh, and then I remembered that I'm lactose intolerant. F*ck me. See, I'm very newly intolerant to lactose. You know, lactose, that thing that makes dreams come true. Hahaha. Everything awesome (except for seafood) has lactose in it damn iiiit. Why? Why, God, why? Point is, on top of forgetting this fact, I have a knack for ordering the most lactose filled dish on menus. And then I regret it later. Ugh. Anyhoot. It was a LOT of yogourt. I could just imagine how much farting was going to ensue. Ha. Haha. But seriously. It was too much of a good thing. The garlic was great in there tho. I mean, yogourt and garlic is always a good match. The little balls of meat were very tasty and well seasoned and actually quite awesome. The chili part didn't taste much like chili: I actually had to look at the description to find out that it was supposed to be that. The oregano made the dish even more beautiful but didn't add much, taste wise. I wanted an extra zing in there. Dried oregano, for me, is like an umbrella in a tornado; it's just worthless. That's right, I went there.
Service was weird. Our waitress asked if we were ready to order before giving us the menus. She seemed uber nervous to serve as many people and they so did not look 'ready' for a big group even if we had reserved. We had to ask for water. I'm not even going to start with that. Our bodies are made of 70% water and we need it to survive. Oops, I started. We also got our plates at different times. I'm not talking 5 minutes apart, I'm talking at least 10 minutes. That wasn't cool man. Not cool. Oh and they didn't clear our tables when we were done. Argh.
And now, the scores!
Food: 6
Service: 5

It was nice to try Turkish food but I don't think I'll be returning to Avesta. Imma gonna find me another Turkish restaurant. Or maybe not.

In addition,the Ayran was the worst ayran I've ever tasted(this is a drink made of yogurt,water,and salt)!! Coming from the Balkans,and having visited Turkey,and having eaten REAL Turkish food,that was...a disaster! And their kofteS( meat balls) were the most miniature ones I've ever seen!!! Thankfully at least the taste was good,unlike the funny tasting salad that was part of the plate- my tongue got numb at the first bite probably cause whoever was preparing it kinda fell asleep while putting vinegar and lemon juice in it...Good news is I survived! Great news is- never again at Avesta!