Another great post by Serge, one of my ex-coworkers. Turns out, he writes great reviews :) Merci Serge!

I have to say, my girlfriend Mélanie and I aren’t really lucky when we go out on a date for a quiet meal in a restaurant; it almost always rains, it’s cold and windy, and it sometimes dampers our mood and excitement about trying something new.

Our night out to eat sushi was one such evening.  My girlfriend is new to eating sushi and macki, so I wanted to be sure we would go someplace where the food is fresh and the setting appropriate to maximize our enjoyment.  If you’ve ever had bad sushi, you know some of us don’t recover from a bad experience and vow to never eat sushi again!  I could have searched forever for the perfect place... but then I thought I should consult my favorite expert: Marie-Christine from “Eating out in Montreal”.  She recommended “Mikado” – I looked it up, read the menu, saw some pictures off of their website, and found they had 3 restaurants in Montreal!  I figured I’d save on gas and make reservations at the Monkland establishment.

First, they have a reservation form you can use on their website, and they give you call to confirm.  The whole thing took 4 minutes, from filling the form to getting the call!  I thought that was very efficient indeed!  I should warn you though, if you have your computer speakers on max, put the volume down before accessing the website because they have a splash welcome screen with music that sort of doesn’t sound good when it’s super loud.

I also thought the Monkland area would have better parking than the St-Denis or Laurier areas... but oh my was I wrong!  If you’re going to go by car, prepare to walk some!  I didn’t think it was a big deal, we ate so much that the walk back to the car was a welcome digestive aid...  I believe access by public transport is much easier though.

The Monkland restaurant has a tiny terrace area in the front that looks out onto the busy street – it was too cold and rainy for us to sit outside but otherwise I still wouldn’t want to eat sushi with busy traffic zooming around me.  As for the inside decor, it’s pretty standard for a Japanese restaurant; they don’t overcrowd the walls with knick-knacks which is a good thing.  The table settings also have traditional items on them, such as a weird looking bowl-apparatus that they remove from your table when you sit down.  It’s just decorations I suppose.  The music could’ve been more traditional, but Japanese music does tend to be... snoozy at best.  What they had going on was a lot of 80’s pop music which we thought was kind of funny, it certainly made us smile to hear “Billy Jean” with our food.

And speaking of food...  there isn’t much that I could say about how the general setting could prepare you for such a delicious experience, because they are two separate things altogether.  At first I thought the weird bowls and Michael Jackson could mean the food would be sub-par, but I assure you it is not!  We started with a half-bottle of Kim Crawford sauvignon white wine (it was expensive for a half-bottle) which had the fruitiest taste that blended marvellously with our food!  We started off with an order of 4 shrimp dumplings, absolutely sublime!  If not for the large plate of sushi coming our way, we’d have eaten more dumplings.  Mikado has different ways of ordering an assortment of sushi and maki, depending on your level of tolerance for such things as caviar and algae.

Mélanie, being new to sushi, still can’t get past those two traditional ingredients so she went with a standard assortment of sushi wrapped in a sheet of rice (or was it soya, I don’t know{note from M-C: soya!}) – this, you need to do upon request otherwise they assume you’re ok with algae.  This assortment had the usual cucumbers in rice, and also salmon and shrimp and all of that (you’ll have to excuse me but I didn’t retain every type of sushi on the plate). 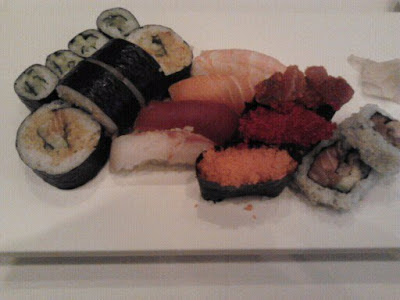 I had the larger assortment which also included maki, I like my sushi with algae and caviar.  Overall we were blown away by the freshness, the texture (I’ve often found the rice to be either too soggy or too dry) which was perfect and the quantity.  Prepare to bring some money with you, our experience set us back a little. 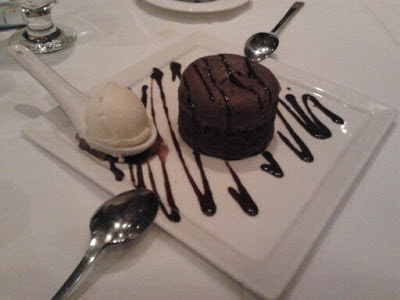 We concluded with what they call a “moelleux au chocolat”.  I’m a dessert fan, and a good dessert can make or break my experience.  So when I inquired about this mysterious item, I was surprised to learn it was not some fruit fried in oil soaked in chocolate (again, I apologize if that sounds like I assume things about other cultures, it’s not a bad thing if it has fried fruit) but rather it was a chocolate soufflé!  And this was our first soufflé ever... and it was freaking awesome!  I’ve seen it on TV and how when you cut into it it’s supposed to be gooey and warm.  It was all that and then some!  One soufflé was enough for the two of us.

Throughout our culinary event we were served by a very knowledgeable young lady who really made sure we knew what we were ordering and came around just often enough to check up on our table without being overbearing.  I’d say Mikado has a lot of confidence in what they serve so they don’t act insecure in any way – they bring you food, you eat it and they know you’re not going to be disappointed!
Service – 10/10
Food – 10/10

I highly recommend Mikado in the Monkland area, and I hope to try out their other two establishments soon to compare and validate their work ethic.
*Stuff to watch out for: lack of suitable parking, might have to walk / tiny terrace next to busy street / potential to be cold in the restaurant if seated near an air duct*

Melanie here! I would like to add that the desert was prepared by their own in-house pastry chef. And, wow that ice cream was sublime with the soufflé. It's homemade. I'm not a desert person but I would have their desert anytime. The whole experience was amazing, from the dumplings (I wish I could have one now) to the mackis and to end a meal right a marvelous desert!

Nice! I will def try their deserts next time :) Thank you guys so much for the review :)