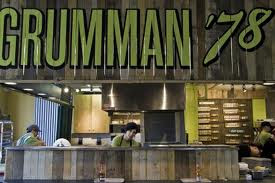 Grumman 78 is best known for its food truck that can be found on various festival sites in the summer. After a short stint at Faubourg St-Catherine, Grumman has officially moved its brick and mortal restaurant to its “headquarters” where the food destined for the food truck is made.

Grumman’s is now located in what looks like an old garage or warehouse. It has been cleaned up and repainted and outfitted with crafty furniture. Most of the tables are made out of wood pallets that have been assembled together. Although it looks quite neat, the current set up does not leave very much leg room (disclaimer: I’m rather tall but my partner who is not so tall also came to the same conclusion). It is worth appreciating the effort to use recycled objects, but simple changes in the design could possibly make these tables a bit more comfortable.

Having been unable to secure a table early on a Friday night the previous week, I decided to call ahead and make a reservation. My first call around 1 p.m. went unanswered, worse still the voicemail was full so I was unable to leave a message. I called again around 4 p.m. and left a message, but never got a call back. This was not enough to deter us from showing up at the restaurant that evening hoping that my name had been penciled into the reservation book.

I explained the situation to the host as I came in. He looked confused and shrugged this off but found a table for us anyway. Ironically, the same host ended up returning my call a few minutes later as I was sitting in the restaurant! Better late than never… Maybe, maybe not!

The headquarters offers various Mexican-inspired dishes that are a little bit more complex in preparation and taste to the tacos that they serve out of their truck. My Mexican mother-in-law was visiting this time around, and we wanted to show her another twist on her beloved tacos. We therefore ordered 3 taco dishes to share: pork banh mi, queso fundido and curried lamb tacos.

Each plate comes with four tacos which makes it easy to share with others. We also ordered agua de Jamaica to drink: it is a sweet herbal tea made with hibiscus flowers, delicious! The Quebec lamb tacos had a little bit of heat from the curry, but it was certainly not overpowering. These were a hit! The pork banh mi tacos are a creative twist on banh mi sandwiches served on a tortilla. They come with a sweet and slightly tangy sauce and they are topped with a garnish made of pickled onions and carrots. Finally, the queso fundido tacos are a bit more traditional, as far as Mexican food is concerned. In this case, the tortillas and garnishes are served separately so you can make your own taco. You’ll get a container with melted cheese (nothing special), guacamole and cooked chorizo. These were my least favourite overall, not because they were not tasty, but mostly because this is something that I could have made at home.

The food was good, but I have to say that my memories of Grumman were much better than this… I felt like it lacked some of the fresh flavours I had encountered before.

As for service, let’s just say that our little reservation conundrum did serve as a prelude to how the rest of the evening would unfold. We had an absentee waiter who came off as either detached or even arrogant. We ended up relying on the busboy for service (water, bill, etc.), this guy in fact seemed to be the only one determined to provide attentive service… despite the fact that he had to train a new employee at the same time. Let’s just say that there is certainly room for improvement on that front… Or that they ought to focus on serving food out of a truck!