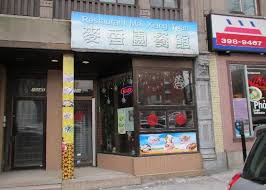 I had heard great things about this restaurant and how it had possibly detroned Qing Hua. I was all getting ready to go eat marvellous dumplings at Qing Hua but then decided to go to its better half :) So I went with Isa and we had really high hopes. You know what it's like when you have high hopes right? You get easily disappointed.

Anyhoot, we got to this chinatown resto (which looks like nothing from the outside) and there was only one table left. Score! There are about 40 to 50 seats in this tiny, crowded room.

You can see four people, mostly women, making dumplings as fast as the wind behind a window in the kitchen. It was fun to see them go at it with the dough and the filling (yes, that's right, go at it). Could not be fresher than that. Amazing! The place itself is nothing special, with chinese art on a brick wall along with some cartoons (ish things). 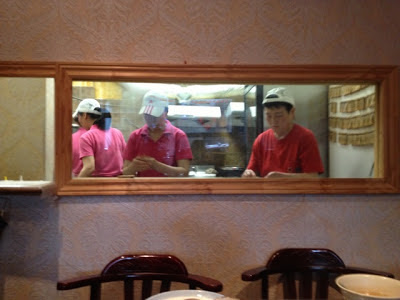 As an appetizer, we splurged and shared a 1,50$ cucumber salad :p It was nice and refreshing although a tad to spicy for Isa. She still ate it though! It had some chillies in there with a tiny bit of carrots, coriander and sesame oil. The cucumber pieces were cut a bit weirdly though; one could say they were really roughly cut! Actually, everyone would say that. It's almost like they used their hands. 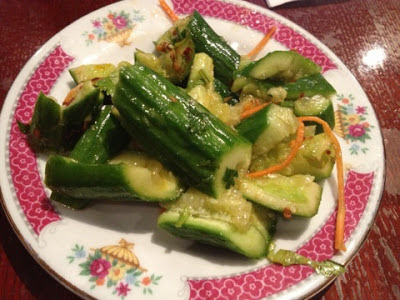 We had two orders of dumplings. You can either have them fried or simply boiled. Obviously they take longer if fried and obviously (duh!) they are better fried (isn't everything?). I was told to have the chinese cabbage and pork one and we also decided to order the shrimp, coriander and pork ones. Oh and FYI, the lunch special from 11 am to 3 pm is 15 dumplings per plate for less $. Nice if you are more than yoself :p You must also know that if you order for under 15$, you have to pay cash.

Alright, so both were good. Both weren't fried the same way though: it seemed that the chinese cabbage one was fried on both sides and the other one, not so much. Both were more squishy than crispy unfortunately. Apart from that, they both had wonderful taste and just enough seasoning. The shrimp one reminded me of shrimp dumplings I used to buy au Jardin de Jade just on the other side, on de la Gauchetière. Yummy. I loves me big chunks of shrimp! And the coriander was great in there!

The cabbage ones were silky and juicy. We also had both soya sauce and hot sauce on the table. The hot sauce was a bit disappointing though---not hot enough. Just one advice, these things tend to be juicy, as previously mentioned, so if you bite into it, the boiling juice may squirt into your nose. Just sayin. And it hurts. 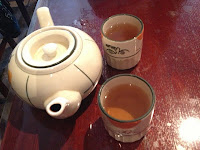 The service was nice. Poor guy was alone. He was running everywhere but was quite efficient and managed to say 'bonjour' to everyone coming in! He served us hot tea as soon as we sat down and since there's a high turnover, he's quick to clean the table.Fast waiter=good waiter :)

And now, the scores.

If you like dumplings, it,s a good place to go. Don't get your hopes too TOO high though. But don't get me wrong, it WAS good :)

Hey MC! This is Steph's favourite dumpling place. We always get steamed, since the contents are already very...rich. I recommend you try them steamed next time. You won't be disappointed! We've had the ones with Beef/Pork/Lam, with celery, coriander, mushrooms...yummm!!!

mmmm! I'll try that next time for sure! thanks :)

The reason behind the appearance of the cucumbers is not sloppy craftsmanship, actually, it is more of a tradition.

This type of salad is named Smashed cucumber salad (pai huanggua - 拍黄瓜). Smashing the cucumber is thought to help the cukes absorb the dressing.

Next time try the peanut and celery salad. It's delicious!

Tried the celery salad last week and I LOVED it!!!