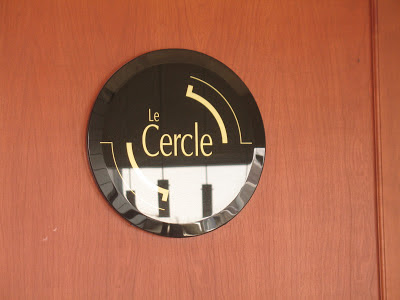 On the before last day of my internship at COOP HEC, my bosses decided to bring me to Le Cercle, the fine dining restaurant on the sixth floor of the HEC on Côte-Ste-Catherine. Thank you, bosses!!! It was such a nice surprise and such a great way to end my 6 week internship! Just lovely, really!

I would compare Le Cercle to Bistro Olivieri mainly because the menu changes every day and I think those are the two restaurants where you'll eat really well in Côte-des-Neiges. The decor is certainly not the same though: Le Cercle automatically feels fancier when you go through the large wooden door. The ceiling is quite high and the place is surrounded by huge panoramic windows, giving you a view of at least half the city.

I had the coconut cream with safran oil. Turned out to be very tasty but a tad granular. But still amazing! I would recommend it to anyone who loves coconut like I do. Then I had the beef stew. Very nice presentation in this little cast iron pot. It was maybe a tad too salty but very good nevertheless. It was surrounded by this little balls of goodness called acini di pepe and some very well seasoned button mushrooms. The tiny little pasta balls were just little pieces of heaven. Heaven I say! I was actually sad when I was done eating them :) I must say that I had ordered the duck at first but 5 minutes later, the waitress came back and told us there was no more of that. 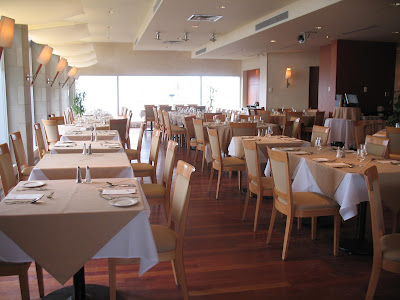 The service was great, even with a full house (ok, I obviously did not take this picture at that time). The waitress came as soon as we sat down with some water and I didn't have to ask for it for the rest of the meal. She was very present, which was nice.

So little people know about this lovely restaurant in the HEC on Côte-Ste-Catherine. It's great!  Bring whoever you want to impress!