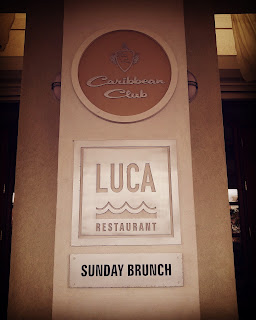 This is my second time on Grand Cayman. I came here last March to visit my old roomie, Rachie, who is from here (one of the 12 people that are actually FROM here), her husband Carl and their little one, Nini! One of the things I remembered the most fondly was Boozy Brunch. OK, 'remembered' is a big word. Basically, they give you mimosas until you drop. And I did drop. When we got home, I passed out on their beach for 2 hours and got a huge sunburn. It was like, 'what is that, a tomato? NO, it's Marie'. Ya. Anyhoot, I really wanted to do that again so we settled on Luca's! 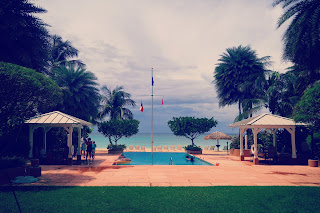 Luca is located right on Seven Mile Beach, in a building that comprises of long and short term luxury condo rentals. We had a table indoors because it was oh-so-hawt, but the view from outside was just jaw dropping. Well, pretty much everywhere you go in Cayman has jaw dropping views. I wanna live here. I wanna live here so bad. But enough about my moving day. The restaurant is quite big inside and has a big terrasse as well. It's a bit on the dark side indoors, with lots of dark wood and dark ceilings. It's a good thing I was wearing my hot AND sexy (ya, that's right) dress because the hot girls started pouring in right after we were seated. I say 'it's a good thing' like I was gonna hit that or something. I wish. I. Wish.

You get in and before even entering the restaurant, the dessert table is there to tease the hell outta you, and when you get in, dang, there is, wait for it, a plethora of platters filled with seafood (hello!!!) and breakfast fixings and fish and meat. Oh my! Basically, everything that is good on earth (except mr unaffordable lobster). I am MADE for all-you-can-eat buffets: I totally prep my stomach for it. You know, like the people that enter pie eating competitions? Like that. The stomach is a muscle, people! The trick is I eat a bit less the day before and in the morning, I'll eat maybe an egg and a fruit. That's it! You get there and you eat slowly so that your stomach doesn't fill up so quickly. Follow me. Trust in Marie. 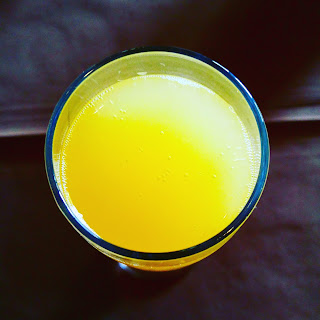 As soon as my ass hit the chair, we were asked if we were going to go all the way (with the mimosas, not with the waitress). The answer to this question is yes. Always yes! Don't even think about it and just nod in the right direction for bottomless mimosas! 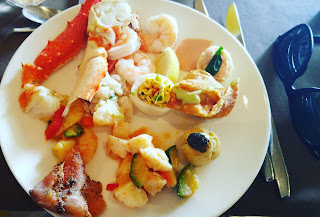 My first plate was...seafood! Just FYI, most of my plates were seafood. Why? Hello!!! I want to have my money's worth, I eat the expensive stuff. Sheesh! I put some crab legs in there, shrimp, mahi mahi ceviche, lobster salad, and a devilled egg, because I likes me a good devilled egg. I don't even know what to say about the crab: it's crab... it's the second to best piece of seafood you can eat. With butta. Oh, the butta! I had crab on every subsequent plate. The shrimp were good, you know, your normal shrimp. They had like 4 sauces to go along with the yummy shrimp. The lobster salad, although very flavourful, was a tad on the squishy side. Meh. Hey, at least I had like 3000 more things to choose from! The mahi mahi ceviche was damn good. DAMN good. Which is why I had it at least twice more. The flavours were right on and they weren't overpowering either. Very citrusy, which is what I like, Nay, love. The egg made me laugh because who makes devilled eggs this way? My friend Little Boo, that's who! I had to send her a picture. For all you non-makers of devilled eggs, you usually cut it the other way, so that the egg is longer and more stable on the plate. It was good but not the best. 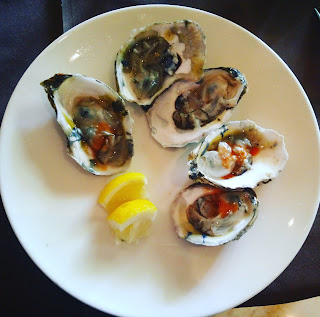 Oysters!!!! As some of you know, I used to hate oysters. Ugh, just the thought of having something slimy go down my throat was enough to make me gag. It's a good thing those days are over and I am able to fully appreciate those bad boys. I've eaten some from the Pacific Ocean and the Atlantic Ocean... and my next words were going to be 'but never from the Caribbean' (she says with a big smile) but my friend has assured me that they probs got em' from the States. Damn YOU Donald Trump! OK, he has nothing to do with this, but...any chance I get...#FUdonaldtrump Point is, they were oh-so-good and juicy and just briny enough. Mmmm, just add a bit of tabasco and lemon, and you've got yoself a partay! 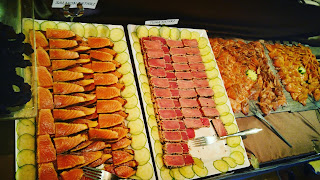 The salmon tataki had some cumin on it and was rather sweet, but not too sweet. It was really good. This, coming from a girl who used to be an expert at tataki (yes, I am many things). The tuna with sesame was good but not as good as the one we used to prepare at Sushi Taxi. 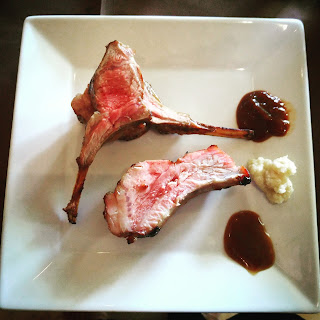 The meat! They had a table with a rather good looking man, serving up manly meat. I'm not straight, I swear it! Anyhoot, I had the rack of lamb and the ribs. The beef Wellington wasn't ready yet. As soon as I got back to the table, Carl asked me why I had taken the really REALLY fatty ribs. My only answer was that it is automatic for me to have the ribs. I see ribs, I want to eat ribs. But they were on the fatty side and not uber tasty (my life is over!). The lamb saved the day: juicy, tender, perfectly cooked and full of flavour. I was pacing myself so I had only taken one piece but man, I could've gone for at least another 4 (or 8). I saw someone bring the beef Wellington (not pictured) to the table and I may (or may not) have tripped, trying to get there faster. I gots to say, it was very good. BUT the dough around it was a tad on the undercooked side. 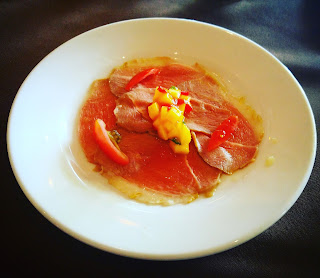 The duck carpaccio. It was really really good. With a bit of sweet mango on top, this hit the spot. You know, THE spot. Nothin' else to say but YUM!

Not pictured is the beef carpaccio, with some wasabi butta, man! That butter made the dish, and then some!

The winners for me were the craaaaaaab (mmmm, put some clarified butta on that sh*t) and the mahi mahi ceviche. Mahi mahi is not a fish with much flavour, so koodos for making it so damn tasty! 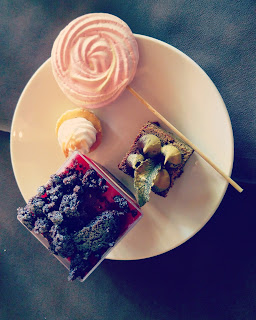 Let's not forget dessert. As you can attest, I did not go overboard (taps herself on the shoulder). I had a tiny lemon tart (how tiny can one be?), which had just the right amount of lemon without being too tart, the sweet brownie with crunchy chocolate on top, the cheese cake with soft berry mousse that was just melt-in-your-mouth awesome and the meringue pop on a stick that was just so cute! Well, it was good too: crunchy and sweet as a meringue should be!

Service was 150% on par the whole way. We got seated in a second, got water and drinks in a minute. Our mimosas were filled every couple minutes which made for a very happy (and drunk) Marie. We could hear them opening prosecco bottles left and right. That is the sound of heaven, right there. They took our plates away as soon as they were empty. Now THAT's service, my friends!

I really want to say that I'll be back but, let's face it, I don't live here. Sadly. And with roughly 115$CAD (including tip) a pop, I can only do one boozy brunch per visit. Last time was at Agua, this time at Luca's, next, we're heading to the Ritz baby!